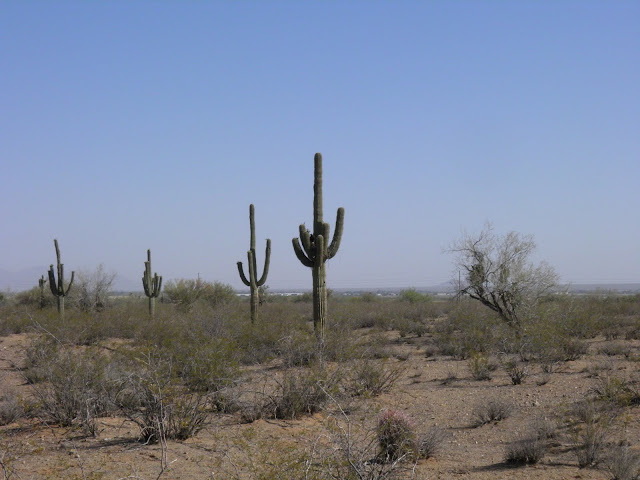 If you have seen the movie 'Pale Male', about the light colored Red-tail that was the first of his kind to breed in New York's Central Park, you have an idea of what I mean if I say that our raptor here is exactly the opposite of that hawk: our Red-tail is very dark, very unused to humans, and lives under extremely harsh conditions. For all I know, she may be female. But she also seems to be a pioneer, just like Pale Male.

Around our house we have a breeding pair of American Kestrels, a group of Harris Hawks, many Cooper's Hawks, a hunting Peregrine Falcon, a visiting Prairie Falcon, and a wintering silver gray Northern Harrier. They share the habitat with formidable and dangerous competition: there's always a pair of Great Horned Owls around. And there is neither water and nor a supply of feral pigeons.
There are Red-tail nests along the Santa Cruz River and in lusher parts of Saguaro National Park, and the hawks come through our part of the desert regularly, but I've never seen the aerial shows of mating pairs here. 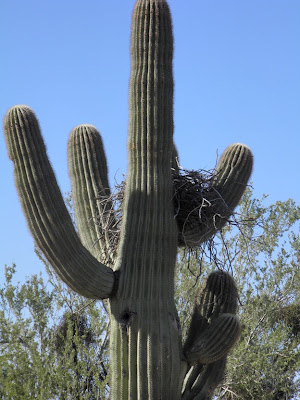 The first indication that  Red-tails were moving in was an abandoned nest in a saguaro with no sign that it was ever occupied. We checked ever now and then, but nothing changed: no fresh twigs, no whitewash.... 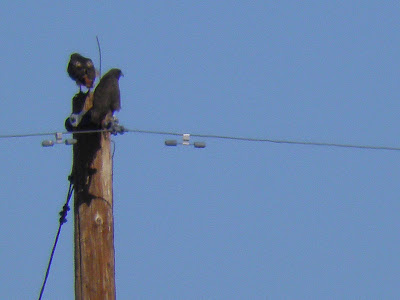 Only once in late January I caught a glimpse of a pair of Red-tails on the power line at the far side of the 400-acre state land. 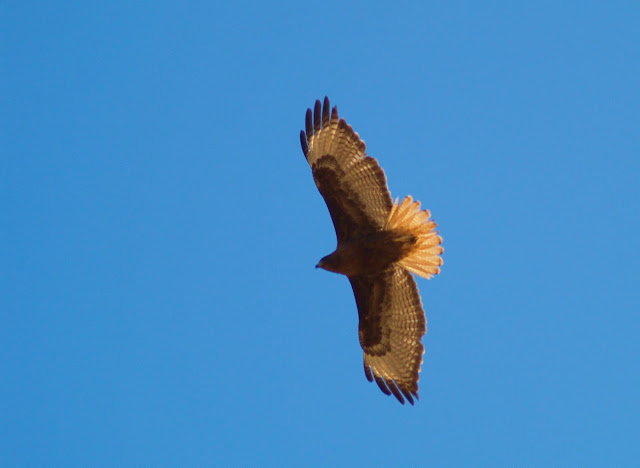 Then a dark silhouette appeared a couple of times high above us while we were walking our dogs. When the tail caught the sunlight it flashed in striking, bright orange contrast to the clear blue desert sky. But nothing ever happened at the old nest. The bird seemed protective of the area though, and we mostly stayed away. 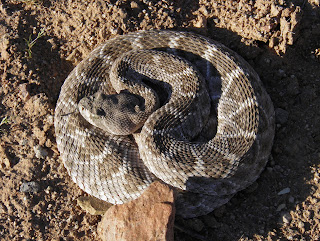 On this fresh cool morning (after a spell of near 100 degrees) we were going to give our dogs a special treat - a long walk through the state land. No hawks in the sky yet. The dogs watched Zebra-tail Lizards scramble out from under a thin cover of sand and scurry away, dug feverishly for squirrels, looked longingly for traces of cattle ....We passed the empty old nest, picked up some trash, collected some nice rocks, and inadvertently stepped over a rattler who completely ignored two shoes and eight paws coming within inches of his low-profile coil. 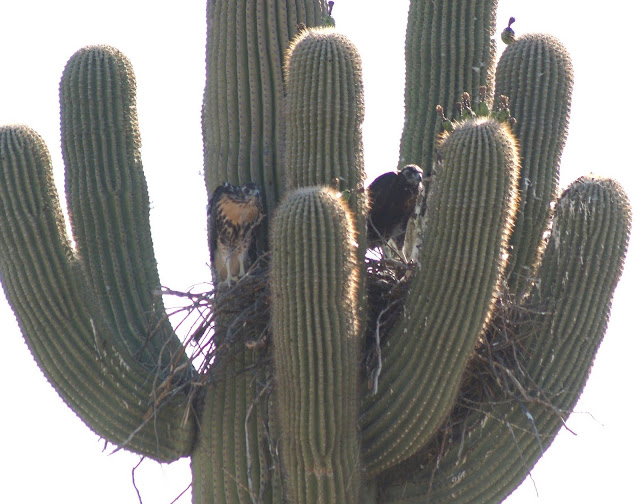 When I looked up, Randy was standing next to a saguaro, and right over his head the shape of two or three small hawks in a big nest were outlined and back-lit by the rising sun. They stood completely still, and so did we. Two of the nearly grown chicks had  light chest feathers. Harris Hawk or Red-tail? We memorized the location and rushed home to get cameras and our friend Frank who wouldn't want to miss this. 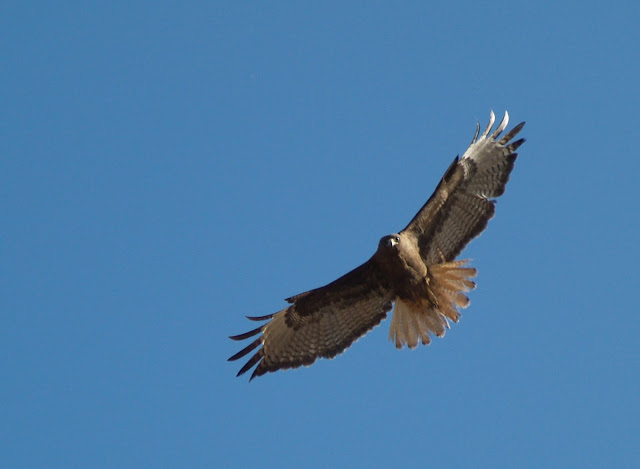 Returning a little later we were discovered by the dark hawk. She circled. Banked right above our heads. Screamed at us. She is definitely not used to people walking her territory, and let us know her displeasure long before we came close to the nest. 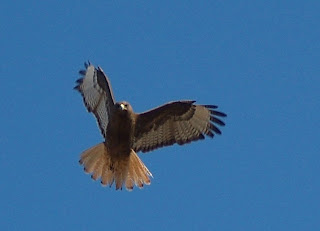 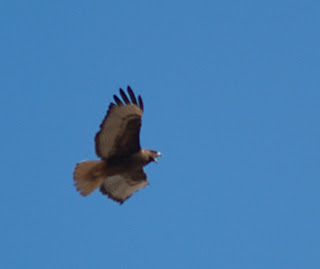 Staying at a fair distance, equipped with very long lenses, we walked in a wide circle to get the sun behind us. The nest is on the west side of the Saguaro, nestled in its massive arms. Until noon no possible angle would allow a clear view of the inhabitants without looking into the sun. I wonder why it's so exposed to the afternoon sun, the hottest around here. The wind blew sharply out of the west all day yesterday, as it often does. But the other, unused, nest has the same orientation. 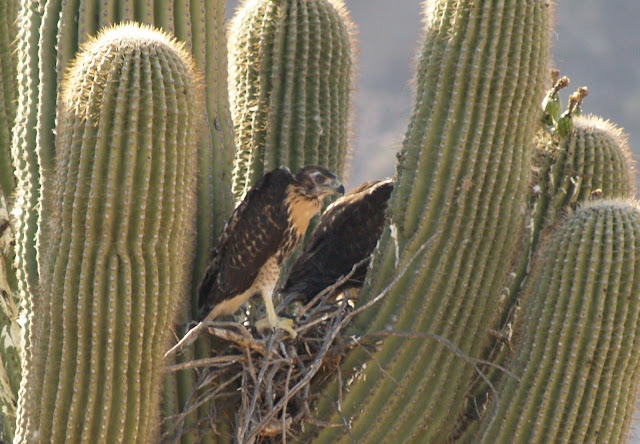 While we were there, the chicks never moved. They are tall and leggy and already have lost all of their downy  fluffiness. One is as dark as the parent, one has a light chest - did I only imagine a third one earlier? 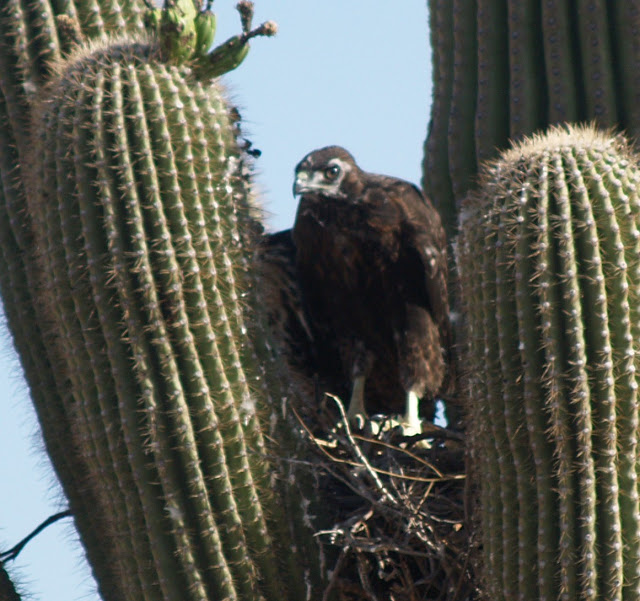 While  female hawks stay with the nest and the young while the chicks are small, leaving all the hunting to the male, both parents would be hunting to provide enough for the hungry beaks of chicks this big. I'm worried because there was only a single parent around. The urgent calls should have alerted the other partner. Shortly, the hawk was joined by another big soaring shape, but that one turned out to be a Turkey Vulture. Still no sign of another adult hawk, but time for us to leave them in peace.