Legume Trees are blooming all over the Sonoran Desert. Those hunger specialists with nitrogen-binding symbionts attached to their root system dominate habitats with poor sandy soils from Texas to California.


While Acacias and Mesquites expose their pollen in very reduced flowers to any willing pollinator and even the wind, PaloVerde and even more so Ironwood and the  western Smoke Tree have retained most of the typical leguminose  flower architecture that requires insects with a short proboscis but a sturdy body to to push their way inside towards the nectar. This triggers an upward movement of the flower's stylus which then rubs along the furry underside of the bee to ensure pollen transfer to the stigma.


The main pollinator of Palo Verde and Ironwood Trees is the Digger Bee Centris pallida. As soon as the chilly desert night gives way to the warmth of an early May morning, the droning sound of the big bees fills the air around every blooming tree. Females zap from flower to flower, visiting each only for seconds but quickly filling the pronounced pollen baskets on their hind legs.

In our blooming Ironwood, I watched males stake out little territories that they patrol and mark with pheromones (Frankie et al. 1989), zigzagging back and forth,  hoping to find an unmated receptive female. It seems that a more successful strategy would be to wait for females directly where they emerge from the nest burrows, and indeed, in many Centris species, including C. pallida, metandric forms occur. These males are larger than the territorial males and appear to patrol nest sites where they wait for females and to mate as they emerge or to even attempt to dig them up to mate (Alcock et al.1976a, 1977, Chemsak 1985, Toro et al. 1991).

Both strategies, searching for and digging up emerging females, and releasing pheromones and defending territories, have been shown to be energy intensive (Vinson et al. 1982). During my attempts to photograph them, I found that males often take brakes from their vigil, usually on the inner branches of the tree. There they fall for several minutes into a torpor like state. I actually coaxed one onto my finger where he kept sleeping peacefully. This was the chance to shoot close-up portraits showing clearly the male's white clypeus (the female has a dark face).

The females are constantly on the move and difficult to photograph. They have to collect food for themselves and the brood provisions, plus fluids to bind the pollen, plaster the cell walls and seal the brood chamber.


The females digg their nesting chambers in loose sand, often into a slight slope. The debris is carried off and distributed rather carefully and doesn't attract attention to the entrance hole. Cleptoparasitic bees, who would position their own offspring to steal the Centris Bee's provisions, are probably her main concern. 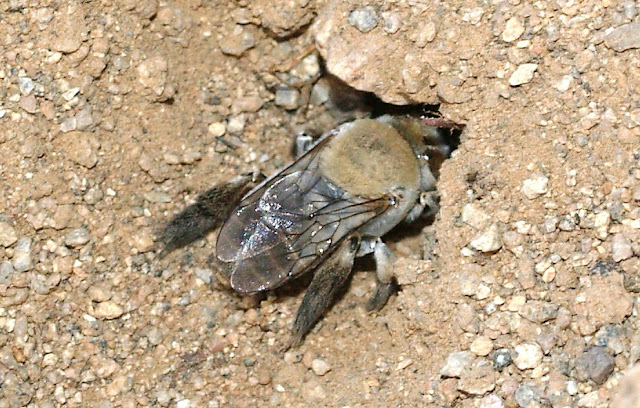 A tunnel and brood cells are constructed, and soil and collected fluids are mixed to stabilize the walls. Pollen, nectar and plant oils are collected as provisions for the brood. Female Centris Bees have huge corbicula (pollen baskets covered in special hair)on their hind legs, and both pairs of front legs are used to push the pollen tightly onto these receptive areas.

Besides Centris pallida, several other species of Centris occur in the Sonoran Desert. The two females above were drinking at a seep in the Ironwood National Monument.

Posted by Margarethe Brummermann at 4:56 PM