The Secret of the Moon Flower

Datura wrightii is blooming again on the sandy banks along the Santa Cruz River and Sabino Creek:  Thornapple, Jimsonweed, Moon Flower, Tolguacha, Sacred Datura - this perennial herb in the Nightshade family is appreciated by many but also abhorred  by a few.


Although it's protected by powerful alkaloids (atropine, hyoscyamine and scopolamine), there are several Leaf Beetles that regularly feed on its leaves. The Tortoise Beetle Plagiometriona clavata can be found in July, and two year-round regulars are in the genus  Lema:


Of the three weevil species that live and breed exclusively on Datura, two Thrichobaris species are 'leaf notchers' that betray their presence through punctures all over the leaves, but the third species utilizes the flowers and I have yet to find it. 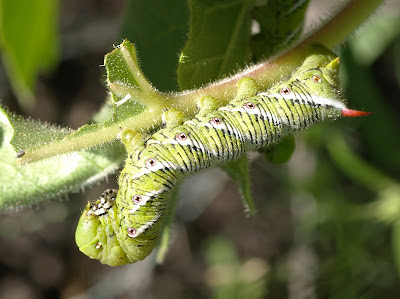 The Manduca caterpillar or hornworm loads up on alkaloids wherever he finds nightshade plants. In our area he would have to find somebody's  tomato patch to match the juicy Datura leaves. 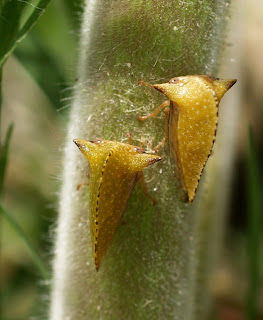 Leafhoppers, Antianthe expansa and their nymphs suck sugar water from the phloem of the Datura stems.


The tightly rolled Datura flowers unfurl before dawn. The huge delicate funnels seem to be illuminated from within. In our climate, they only last til the late morning. 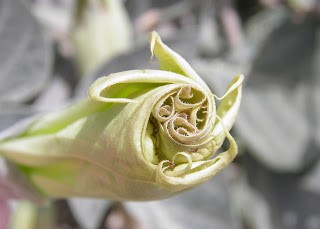 Georgia O'Keefe found eroticism in those deep trumpet shapes. Shamans and  teenagers have been seeking hallucinations from the plant. Witches used it in love potions. Insects find protection from predators with the help of the plant alkaloids that they ingest. Some art show visitors have asked me with astonishment why I would paint such a poisonous weed that also has an unpleasant smell. I was told that it's illegal to grow it in Arizona (luckily, nature doesn't care)
Besides its beauty, I admire the staying power of the Datura. It's a leafy, lush, delicate plant, completely exposed to evaporation and wind damage in our desert environment. Only its fruit, the thorn apples, seem to fit in where almost all vegetation is leathery, succulent, and covered in spines and thorns. 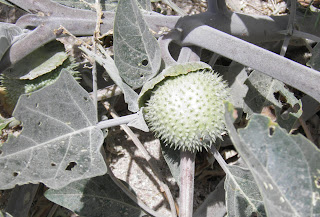 Of course, the Datura prefers to be close to water or else dies back completely during the dry season (9 months out of 12 it seems lately) Only the root stays alive. I once saw an over ten feet long Datura root system exposed in the wall of Antelope Canyon, one of our beautiful, treacherous slot canyons. 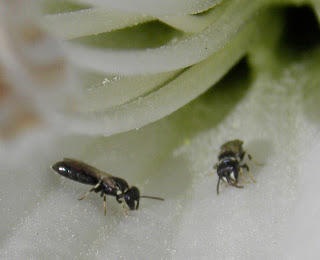 For me, the Datura flower holds another mystery. When I point my camera into the flower to shoot tiny White-masked Bees of the genus Hylaeus, I often notice a lump obstructing the depth of the white throat. Checking flower after flower, I find it in nearly all of them, even in the wilted ones that are more than a day old. At closer investigation the lump turns out to be a pretty substantial beetle.. 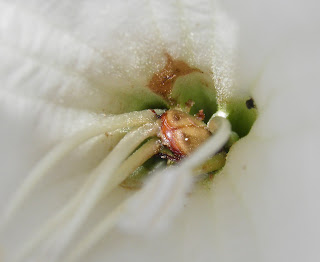 The only way to get to it is to rip the flower lengthwise. I find a sleeping scarab wedged deeply inside. 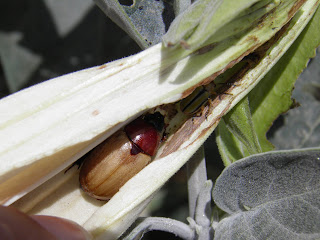 Elytra and actually the whole back-end are a dark cream color, the pronotum is a rich brown, and the head, which is the body part stuck most deeply in the flower, is shiny black. That's also in the name of this scarab: Cyclocephala melanocephala (black-headed round -head). 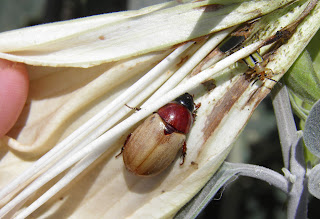 It's in the Subfamily Dynastinae, which makes her (I only found females) a cousin of Hercules and Rhinoceros Beetles. For night active scarabs, these guys are surprisingly alert. When the flower is forced open, the beetles immediately start walking away and even buzzing off in a short, tumbling flight. Did I mention that I stopped by the river on a cool morning on my way to work?
This ectotherm beetle seems more active than it should be, given the outside temperature.


Once I get to the entomology department (only a little late) I ask Carl Olson directly and Bill Warner by email if they know why the beetles are in the flowers? Carl speculates that the flowers open right when the night-active beetles seek shelter and offer a nice bright landing platform to an insect that is always attracted to lights. He adds: "..and it might be warm in there?"
Bill Warner soon emails back: "Cyclocephala melanocephala is known from Datura flowers; it frequents other types of flowers (I think including ariods) in the tropics.  There are some papers about Cyclocephala and flowers--some species are primary pollinators and some aroids "heat up" their flowers specifically for Cyclocephala." (Aroideae are Jack in the pulpit type flowers).


So is it an example of coevolution between the beetle and the plant?
There seem to be a number of advantages for the beetle.
The majority of night active scarabs flies during humid, warm monsoon nights. But in May, C. melanocephala will often experiences temperatures in the low sixties and even fifties, so a warm hiding place would be an attraction. (Elevated Floral CO2 levels, indicating elevated respiratory activity and thermogenesis were found in Datura Flowers).
The beetle fits snugly into the long throat of the flower and is not only hidden from predators but also engulfed in the peculiar smell of the chemical defenses of its host. The beetles hind-end matches very well the creamy white of an aging Datura blossom, a likely adaptation to this preferred hiding spot. The dark head and pronotum always face into the depth of flower.

I don't yet understand whether there is an equal advantage for the plant that would justify the cost of extra metabolic heat production. Some researchers assume that the elevated CO2 levels serve as a signal to the primary pollinator, Manduca sexta, Our beetle with its smooth surfaces seems indeed an unlikely pollinator. When crawling into its hiding place, the beetle passes the reproductive organs of its host flower, but it wouldn't be useful to transfer pollen between individuals because it seems to stay in just one flower for the day. So what am I missing? I'll have to ask some more experts....If I find out more, I'll add it here.

The Role of Thermogenesis in the Pollination Biology of the Amazon Waterlily Victoria amazonica
ROGER S. SEYMOUR* and PHILIP G. D. MATTHEWS, Ann Bot. 2006 December; 98(6): 1129–1135.
Posted by Margarethe Brummermann at 9:16 AM