Sabino Canyon at the end of May

So far this year we were spoiled by rather low temperatures during the days and nice chilly desert nights. But now it's definitely getting too hot for hiking in the lower desert. On Saturday we will supposedly reach the first three digit temperatures. But I had  postponed my last Sabino trip for the season several times, and I really wanted to go.


During my first years in Tucson (when I lived on the east side of town on River Road) I used to run in Sabino Canyon nearly every evening, and I never went home without seeing something exciting like several Black-tailed Rattlesnakes, a Tarantula Hawk with his prey, Mule Deer watching me, Mountain Lions imagined (I always just missed the big cats lounging around the visitor center). On the evening a friend proposed to me we saw Fire Flies which are rare out here, and a cute family of Hooded Skunks which are not. Racoons washed crayfish at the creek and bats were clicking over head. 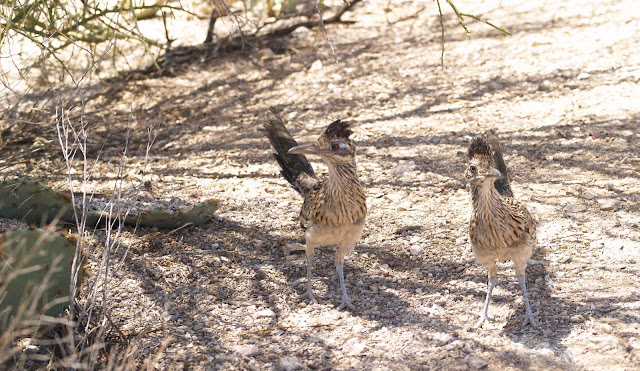 But those were the hours after sunset. Last Thursday I arrived at 10 am. All other visitors seemed to stay close to the visitor center, even the trams were going mostly empty. Two young Roadrunners, maybe too tame for their own good, were hanging out at the tram stop, rushing from shade to shade, making their sharp noises that seem to be as much a clapping of their pointed beak as they are vocal. I kept checking the white balance and the color saturation on my camera. But it was the blistering sunlight that bleached all colors into monochromes.
Even Quail and White-winged doves seemed subdued by the heat. Fewer Lizards than usual, and I saw no snakes, even though I even crawled into the cool moist hollow of the first bridge were the road crosses the  dried up creek. Wild Cotton was blooming there, very ethereal with its translucent white petals and only a few leaves, but standing taller than I. 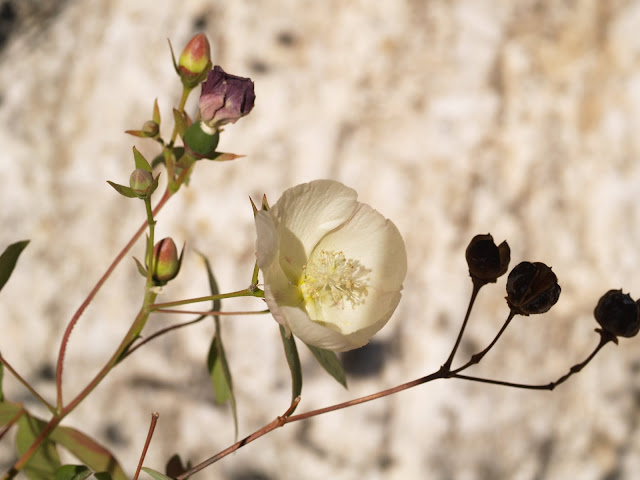 I had hoped to photograph interesting wasps on blooming  mesquites, but the catkins were far past their prime and many had long green beans sprouting from between the last flowers. Mesquite bug nymphs were clustered around those beans, already big and beautiful in the 4th and 5th instar of their development. I collected a few because Carl Olson had told me that the UAICollection could use some more. 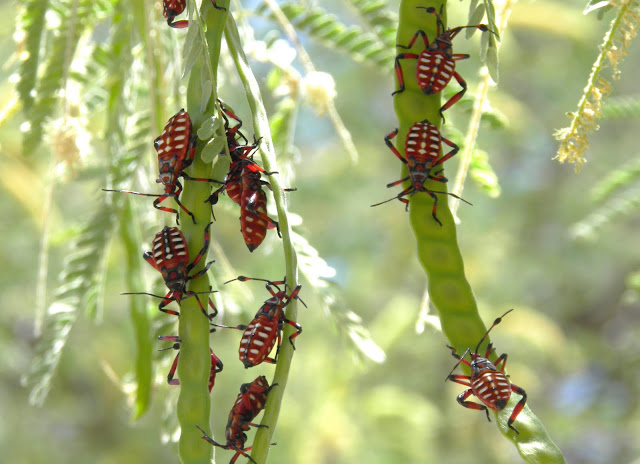 Staring up into the trees, I found that there were other gleaners at work, though after smaller insect prey than I. Amazingly bright Yellow Warblers, a pair of Black-tailed Gnat-catchers feeding a single chick. 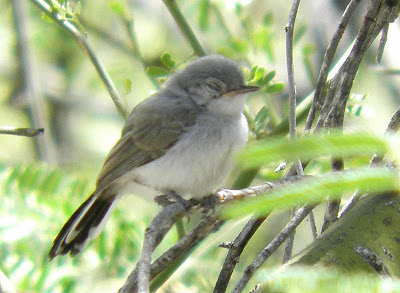 Verdins were still working on a nest. A lone Black-throated sparrow was scratching under Palo Verde and Prickly Pear, and since I was standing quite still, he came within a few feet and to be captured on video and still photo. These sparrows are so elegant, and usually quite shy. 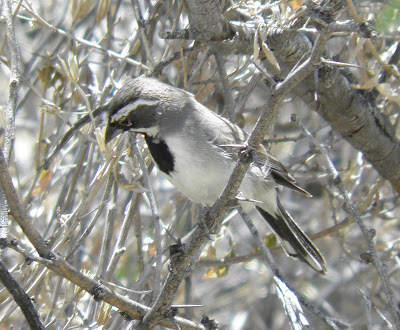 Even in the steeper parts of the trail a Zebra-tail and a Greater Ear-less (this must be the narrow zone where their habitats overlap) are the only lizards that I saw, but I believe that I heard the rustling of a heavier Spiny Lizard (most likely Clark's) on the rough Cottonwood bark. By now I was too exhausted to find out. 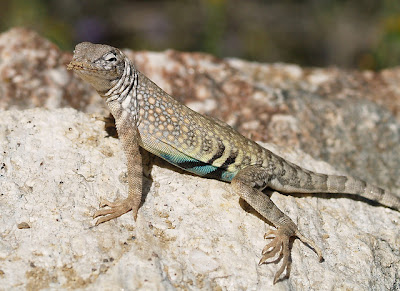 At the dam, there was only the sad and muddy rest of an evaporating puddle. Even the Predatory Waterbeetles and Giant Waterbugs had left. I the moist sand I found Aztec Pygmy Grasshoppers. 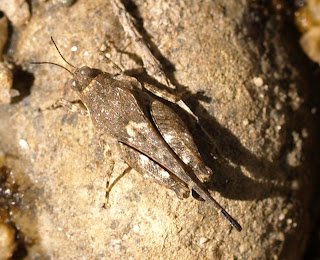 Dozens of tiny, extremely quick Carabids were racing for cover. Measuring only 3 to 4 mm and dark, they were difficult to photograph even in the studio, but I captured a couple anyway. 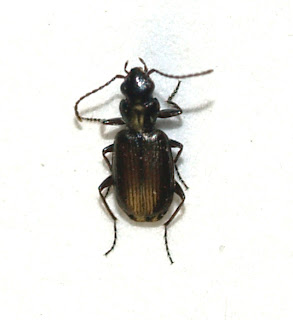 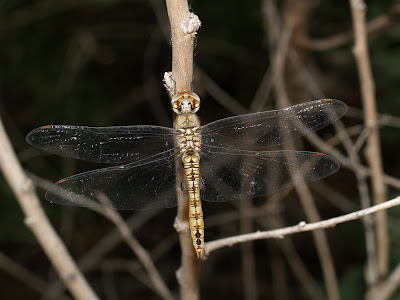 A Spot-winged Glider, Pantala hymenaea landed on a bush - that's a new Dragonfly for me! It was cooler among the big Willows and Ashes, so I felt invigorated enough to follow a Midas Fly to get a picture hopefully good enough to identify it. 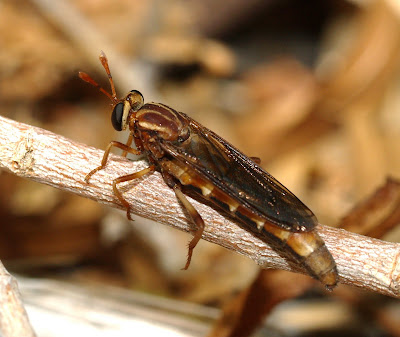 Under the tall trees of the riparian forest where several Hummingbird feeders are part of study on bird migration, Broadbill males were living up to their reputation as feisty warriors. 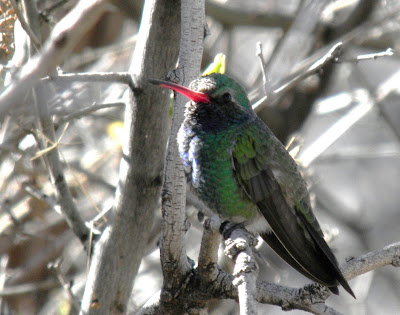 Loud hammering drew me to a mostly dead tree in time to film a Ladder-backed Woodpecker's successful grub hunt. He devoured one and carried the next one away to his brood and  left me to wonder which beautiful buprestid beetles that might have been... 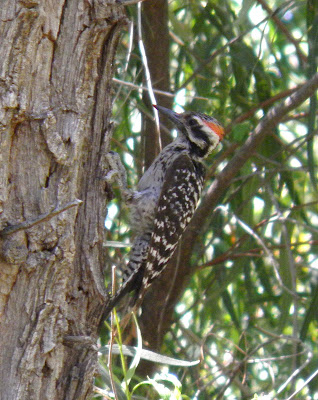 Time to leave the riparian area and cross the mile or so of open desert under the relentless afternoon sun. There are water stations in Sabino Canyon, so I was only carrying a tiny bottle that I refilled four times, but I was also dragging two cameras around with me - the heavy SLR for reliably good macros and the little point and shoot, that is excellent but sometimes doesn't focus, to take videos and long distance shots of birds. 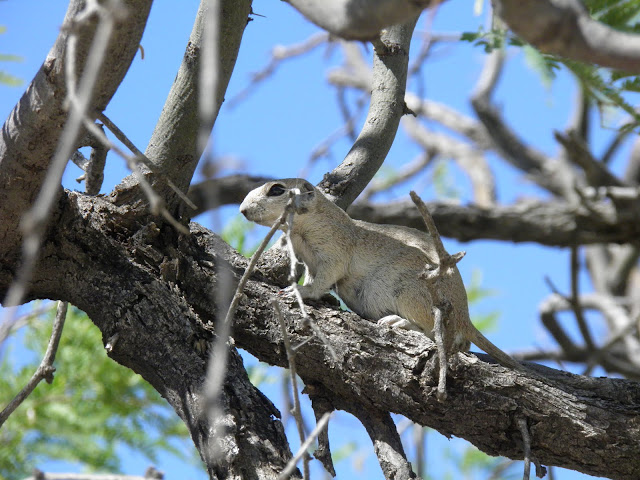 A Round-tailed Groundsquirrel escaped from the heat of the desert surface into the canopy of a mesquite tree enjoying the added bonus of fresh mesquite beans.
Luckily, my car was parked in the shade of that same tree.
Posted by Margarethe Brummermann at 5:03 PM