Madera Canyon at the End of September 2016

The end of September brought a feeling of autumn. Water in the creeks, cooler air, a wall of heavy clouds out south. Turpentine Bushes glowing when the sun did come out. The first flowers on Desert Broom open and buzzing with insects. But soon a heavy downpour drove us from the Proctor Road area.

Big wasps of several different families braved the bad weather. Heavy-bodied, they always need  fuel for their flight muscles. The two last ones are spider hunters (Pompillidae) Their prey is at it's prime right now.

Some Caterpillars are still fattening up. I wonder if they will pupate and then pause until spring, or if a new generation of moths will still emerge this fall.

Soldier Beetles feed on pollen and nectar (?). Flowers are also the meeting ground for couples. Several other species will still reach their peak later in October.

The thunderstorm spared the higher part of the canyon. From the upper parking lot, we chose the Super Trail towards Josephine Saddle.  At higher elevations, Most yellow flower disks were occupied by Buprestids (Metallic Wood-boring Beetles) in the genus Acmaeodera. I am collecting A. rubronotata for an ongoing study, but on this trip I mostly found A. amabilis, A. amplicollis and surprisingly many A. resplendens.

A Rove Beetle had joined the Bups here - I think of that group as hidden by darkness - either  being night active or living under logs (bark) and rocks. But in tropical Costa Rica and in humid, cool northern Europe, Staphylinids often chose exposed positions - sometimes mimicking hymenopterans (bees, wasps).  Yesterday the weather was unusually cool and humid for Arizona. So maybe the hidden live-style of AZ Rove Beetles is an adaptation to the usual hot/arid climate here. Their bodies do seem more exposed that those of 'normal' beetles covered by their elytra.

At above 5500 feet elevation, few bees were active. This one was quietly hugging her perch, waiting for the next burst of sunshine. Leafcutter bees of HB size were also still milling around.

Randy memorized some names of small, delicately patterned butterflies. Many nature lovers start with those obvious beauties and later learn to appreciate the more subtle appeal of for example beetles. So there's hope? 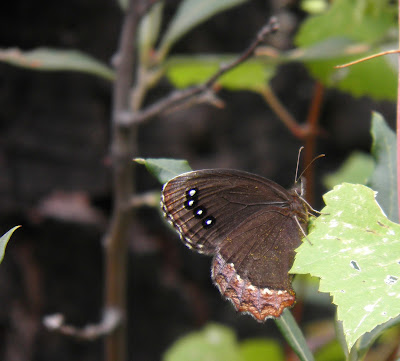 We saw so many Red-bordered Satyrs that Randy joked that one was following me around, trying to lure me into the abyss.  In fact, they seemed territorial and we kept trespassing. They perched rarely on flowers, but on the ground and in the low foliage of trees along the slope. 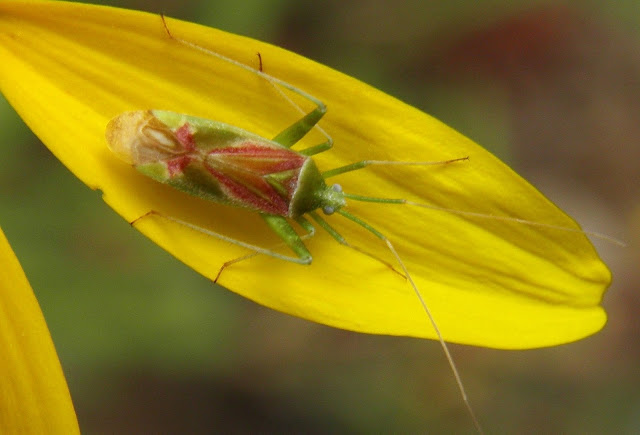 Butterflies are considered beautiful by most. It takes closer observation to discover the beauty of some other orders of insect . I thought this Plant Bug (Mirid) in the genus Phytocoris as amazing in color and pattern as any Butterfly. But because of  the lack of public interest in the group, and the fact that this species is of no great economic importance, there is probably no easily accessible literature to identify it, just as there is no common name. 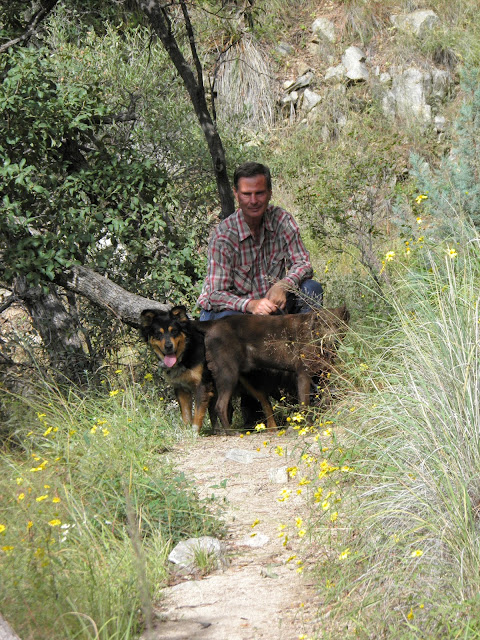 My faithful companions patiently waited for me to examine each and every flower along the trail. At least I did not turn every rock. But they never act bored. It so lovely to be out in this autumn weather. And here in Arizona, we are only at the beginning of another great outdoors season.
Posted by Margarethe Brummermann at 11:18 AM