Sonoran Desert Toads in our backyard

In Arizona, the Sonoran Desert Toad Incilius alvarius is still rather common. Our two neighbors, CA and NM list them as threatened. I am rather certain that our AZ population is declining as well. Among the reasons of course are habitat loss and our on-going drought.

We have several smaller toads and spadefoots whose adaptation to desert condition includes an extremely short aquatic tadpole phase. They can lay their eggs in very temporary puddles, and within days little toadlets are ready to move onto the land. Around Picture Rocks, AZ, monsoon storms usually provide sufficient precipitation at least every couple of years, and then juvenile toads abound. Their paratoid glands right behind the ear are round, not kidney shaped, so most of the young toads are red-spotted toads, not Sonoran Desert Toads.

To breed successfully, Sonoran Desert Toads need more permanent bodies of water for their longer aquatic tadpole phase. They are annually breeding in Sabino Canyon for example. But I doubt that our population here in Picture Rocks had any offspring in years.
I think that one adaptation of Incilius alvarius might be in its potential longevity - defined as the long lifespan of the individual. Maybe they are simply able to wait for years until conditions get better. At that time they may be able to produce a new generation of offspring that can outlast the next period of drought. Saguaro procreation follows that pattern, why not, on a smaller scale, SDT procreation? 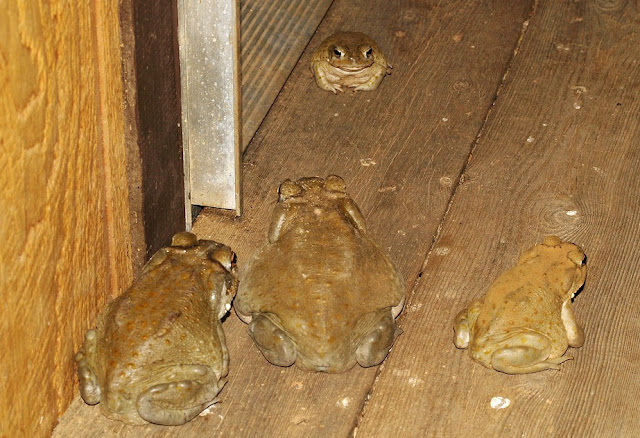 While I have not tried to mark any of our toads for individual recognition, I have photographed them often and believe that I can recognize several individuals. I'm rather certain that I have seen about 4 individual toads each summer since I started watching them at our porch lights in 2007. They were already fully grown at that time. Longevity in toads is not impossible. In Germany I raised Bufo bufo in my aquaterrarium while I was still in high school. When I left for my postdoc time in Norway, I first had to find a home for a couple of those toads, then 14 years old.
Here in our yard in Arizona, the over-all number of individuals has been declining over time. Since 2007 I found only one less-than-fist-sized juvenile. It's in the picture above. The adult toads are sometimes rescued from swimming pools, but I have never heard of any swimming pool tadpoles. There has not been any lasting natural pond here for years, so I don't know where he's been hatched. 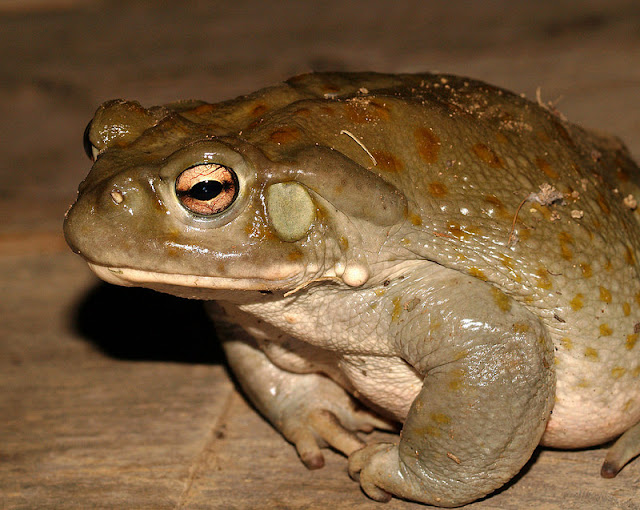 Animals that are short-lived usually breed copiously and fall victim to predators easily.
Long-lived species need to protect themselves against predation to reach their full potential. So the evolution of individual longevity usually includes some potent defense against predation. The primary defense of the Sonoran Desert Toad is a milky fluid produced in skin glands, the most obvious one being the bulging, kidney-shaped paratoid gland.  The exudant of these glands is a potent cocktail of toxins, among them:


5-methoxy-N,N-dimethyltryptamine) is a psychedelic of the tryptamine class.

If ingested by a potential predator, the milky juice causes a series of reactions:
Excessive salivation or foaming at the mouth, pawing at the mouth, head shaking, red or irritated gums, drunken gait, confusion, vomiting, diarrhea, weakness or complete collapse, heart arrhythmia. Death can occur by respiratory arrest.
So especially for small dogs, the experience can be lethal. Seizures and death can occur within 30 minutes. Before veterinary help can be reached a vigorous mouth rinse from a water hose may be the best first aid.
Like most defensive weapons, the toad toxins seem to come with a warning:  the strongly irritating effect on the mucous membranes of the mouth (as well as the mouthwash applied by the terrified owner) probably warns most dogs and should keep them from repeating the experience.

But there are always exceptions: One summer evening in 2004, our all time favorite dog, Cody, who feared nothing except thunder and lightning, danced up to me with brightly shining eyes, his normally flat coat all fluffed up, his tail wagging, and he happily began to hump my leg. That was not his normal behavior at all. Shortly after, his breathing got labored, his heart raced, his front legs bent and seemed paralyzed. You can imagine that by then we were already crossing Contzen Pass on our frantic drive to the vet. When we got there though, Cody, fully recovered, marched into the practice in his usual way - like he owned the place. Even though they were completely gone, the vet recognized the described symptoms as those of a toad-licking-episode,  explained that  foaming from the mouth was optional, and that no further treatment was recommended.
But Cody should have gone to rehab. For three more years, he indulged his addiction: in early June, just once, he would show up bushy-tailed and shiny-eyed and aroused by any fence post. He never went through breathing and  arrhythmia again - he had learned to dose his drug. We did find a dead toad after one of his orgies. But Cody got over it. He just stopped. When the fourth June arrived Cody completely ignored the toads.

Cody was never our only dog who shared the yard with toads. We always had a whole pack of medium to large canines. I never saw any of them go even close to the toads. When we got a new dog I usually showed him the next toad I could find and gave him sharp 'NO!'

But none of our dogs besides Cody ever seemed at all interested in contact with a toad. Instead, there seems to be a very slight avoidance reaction - only about as much as a provocatively tossed  ball would elicit from a convinced non-retriever. Our dogs were all rescues with unknown histories. Maybe they all had tried to grab a toad once and got their mouths burned? Who knows.

But I do know that the big toads are very old denizens of the desert who should not be persecuted for protecting themselves against predators.  They should not be evicted from their ever shrinking habitat for the sake of our pets. On public forums I see many hateful comments when images of these toads are shown. Most are based on exaggerated fear. Dogs are smart (most of them) and can be trained. They can also be kept indoors during summer nights when the toads are most active. We've learned that since our experiences with Cody. 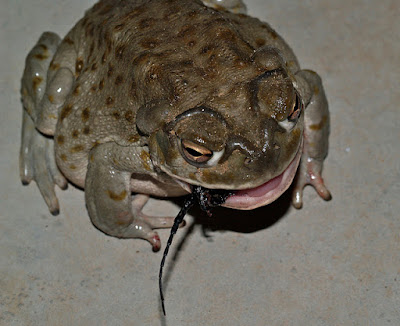 It  helps to learn about the behavior of the toads. They are hidden underground during winter and spring months but they begin to emerge in June, weeks before the first monsoon storms can be expected. Night active, they feed mostly on insects up to the size of a Palo Verde Beetle. In their large scats, wings of  June Beetles and whole abdomens of Pinacate Beetles dominate. Desert  Toads quickly learn to hunt under porch lights where their prey bugs congregate.

Amphibian skin is no great protection against dehydration, so they regularly need water to rehydrate. Skin areas under thighs and belly are specialized to absorb water quickly. That's why they like to sit in shallow water - be it a pond, a bird bath or a tub for the dogs.

For dog owners, that's where supervision and maybe interference are most necessary.  And if someone is convinced that his yard is his property and it's his right to do everything to protect his beloved pets, he should consider this: it's impossible to kill, transplant or exclude every last snake or toad.  It's nearly impossible to seal your yard against determined desert creatures that dig and climb surprisingly well.  So you better have your dog under control for that unexpected one that will eventually try to reclaim your yard as its territory.
Posted by Margarethe Brummermann at 12:17 PM