To me, orbweavers with spiny abdomens seem exotic and tropical. But actually we have at least two in SE Arizona that I see occasionally.

When I found Acanthepeira stellata (Starbellied Orbweaver) in Sycamore Canyon, Santa Cruz County, and nearly mistook her for  a shriveled leaf. She typically rests during the day in the vegetation and occupies her web only at night, so this kind of cryptic shape and coloration seem certainly useful.


Rather colorful and obvious, the day active Micrathena funebris hangs in her vertical orb web during the day. The spider occurs from southern Arizona and southern California south to Costa Rica. Until a couple of days ago, I had seen one specimen in Montosa Canyon (Santa Ritas). But when Heidie and Eric Eaton visited Sabino Canyon (Catalinas) on a balmy hot July morning Eric spotted many in the understory of the vegetation of the riparian-desert interface, and one day later, with a freshly honed search image, I saw them in the Athascosa Mountains (Santa Cruz Co) as well.

Along highway 83, I collected two tightly woven retreats hoping they contained young Jumping Spiders. Instead, they turned out to be Prowling Spiders Miturgidae.  Eight eyes in two rows of four, claw tufts, conical spinnerets, and the habit of building silk retreats or sacs characterize the group.

The spiders I found along AZ Highway 83 and again in the short vegetation along Montezuma Canyon Highway  belonged to genus Cheiracanthium (Longlegged Sac Spiders). They hunt, running quickly over the vegetation at night and build a new retreat every morning.


The space-filling, tangled web of the Desert Shrub Spider (Fam. Diguetidae) is suspended from the spiny pads of a prickly pear cactus. In the middle hangs her retreat, a dome that incorporates many old prey items.

Diguetidae possess only three pairs of eyes. Their bodies are usually covered in reflective setae, probably an adaptation to the radiation of the desert sun. At night, we found several females weaving  and repairing their webs.

The typical cactus spider in our own backyard west of the Tucson Mountains is Metepeira labyrinthea (Labyrinth Orbweaver). Her web is an orb surrounded by tangled labyrinth lines. Egg cases are incorporated into the tubular retreat that is covered in detritus. Spiderlings often stay within the mother's labyrinth. 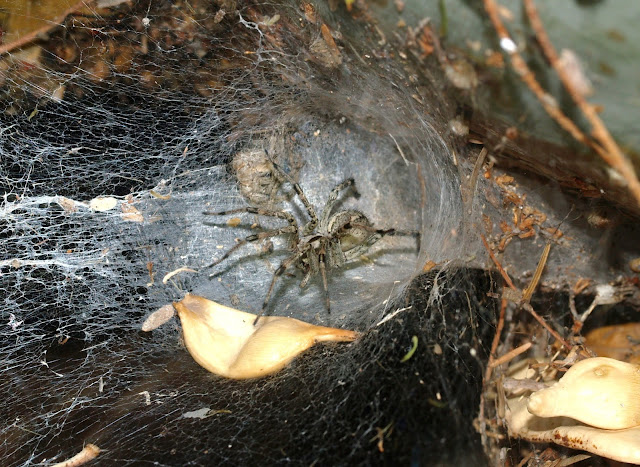 Close b to the ground, also protected by the cactus spines, a Agelenid spider (Funnel Weaver) lurked in her funnel entrance. Her web is not sticky, the fast spider rushes out to run down  prey that comes close. Eight eyes in two procurved rows and a pair of dark longitudinal stripes on cephalothorax and abdomen are characteristic.

In similar locations the funnel web wolf spider can also be expected. So look them deeply into the eyes: all wolf spiders share a typical eye arrangement: a row of four in front plus a trapezoid of four further back.

In the prickly pear at the Canoa I 19 rest stop we also found Western Spotted Orbweavers that already looked surprisingly grown up. That's a clear sign of the waning of another Arizona summer.
Posted by Margarethe Brummermann at 2:24 PM