About every three years the beetle collecting community - that does not include me, as a mere photographer - buzzes with new about the emergence of the spectacular longhorn beetle Megapurpuricenus magnificus   (Texas Canyon Longhorn). It's the beetle that used to be called  Crioprosopus magnificus, but when I had just learned that name, it was changed. 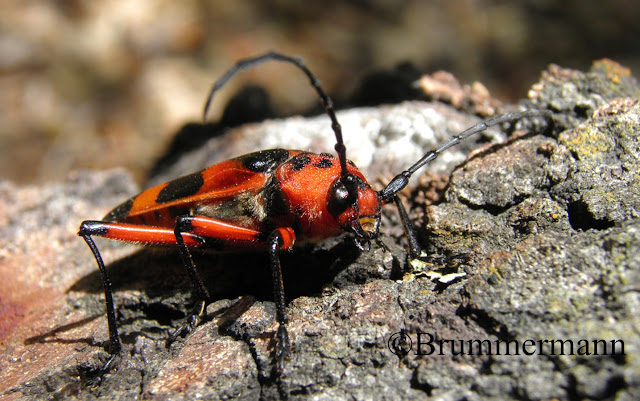 Many big beetles go through several years of larval development. But members of most species still emerge every year. But like the 17 year cicadas, the Texas Canyon Longhorns emergences appear to be rather synchronized. The beetles are very rare for a couple of years, then they appear in numbers, then again only a few individuals show up. Despite their common name, they do not only occur in Texas Canyon but in several sky island areas of Arizona and Mexico. The three year rhythm seems consistent everywhere, but the different populations all seem to be on their own clocks, so in a particular year they may fly in one mountain range, but not in the other.

Their host trees are several of the local live oaks, Arizona white oak, Emory oak, Silverleaf oak (Hovore 1983). In Arizona, the beetles seem to like smaller trees (or the host trees are stunted due to the beetles activity?) - the diameter of the stem  between knee and hip height is usually only about 10 inches. From Mexico there are damages reported, and those mostly occurred in pure Quercus potosina stands at 2500-2642 m elevations.  Under trees with fresh emergence holes you can often find piles of old saw dust that former generations of beetles pushed out when they emerged. 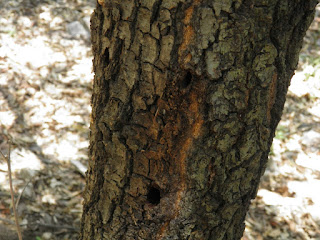 From Fred Skillman I learned a little about the beetle's biology. I'm not sure in which layers of the tree trunk the wood boring larvae feed, but when they are ready to pupate, they chew and exit hole to the outside. This is important because the adult beetle lacks the mouth-parts to chew its own way out. The hole is closed with a double plug of  wood pulp, then the larva pupates. When the imago (adult beetle) sheds the pupal skin in early summer it removes the first plug, but leaves the second in place. Behind it, the beetle is ready for the first heave rain of the monsoon.  At that time it emerges, neatly timed with its neighbors. Now males and females will be active for a short time, usually on warm mornings between 9 and 11 am and preferably after rainy days or nights, so they can find each other to start a new generation which will take flight after another three years. 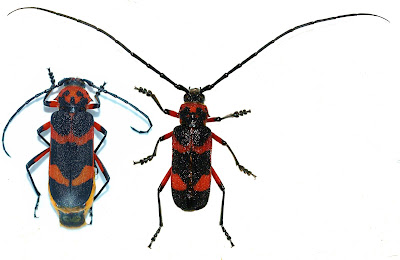 If they don't get caught by collectors first. Luckily, the beetles behavior protects them to a degree: to find each other, they climb to the top of the tree canopy. The females may just sit up there and send out their pheromone signals, but the males can be seen cruising from tree top to tree top. In Texas Canyon, the oaks are fairly low and loosely spaced, so the beetles are quite visible once you develop a search image for them. Flying up there, the beetles are out of reach of most butterfly nets. 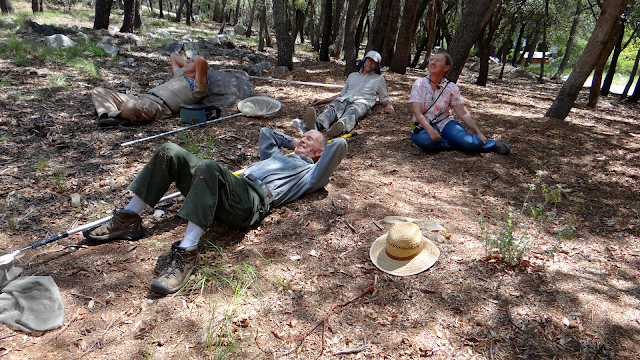 But there are other ways. Once I came upon a group of collectors on a friend's private property who were lounging on the soft carpet of leaves, leisurely watching the top of an oak.  In the morning they had found a female emerging from her pupal chamber in a nearby tree trunk. 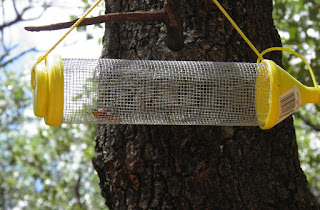 They put her into a little cage and with a rope pulled her up into the tree canopy.  There she obviously did her chemical calling, because eventually we saw a male flying in. 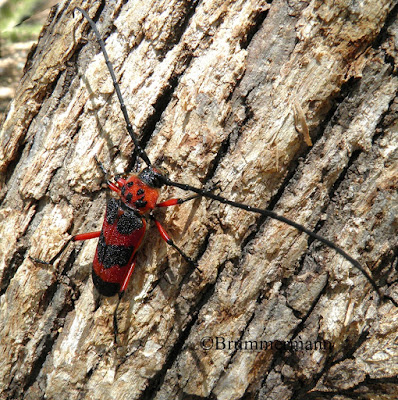 He circled, found the cage, landed on it. The collectors lowered it, reached impatiently with their nets, lost him. Warned, he disappeared. But soon another one showed up, and this one was caught.

It took a lot of convincing to make the guys set him on a tree trunk for  me to take pictures. Believe me, their nets hovered right out of sight. They got three or four males that day, no harm was done to the population. The female was eventually released, and after my photo shoot, she made her way up to the tree tops, this time without a lift and free to seriously enter the mating game.

It is not easy to harm insect species by collecting. The number of eggs that each female produces is enormous. So gaps left by the ones collected should normally be closed by the offspring of those that remain. None-the-less,  older collectors tell me that this particular species used to be much more numerous, if never common. Due to its popularity and its insular distribution, it may have been over-collected. But Fred Skillman also tells of occasional floods in Texas Canyon that may have drowned big numbers of beetles waiting to emerge - remember, most of their holes are only knee-high in the trees. And besides such local catastrophic events, there seems to be an ongoing decline of insect numbers not only in the Southwest, but all over the world may it be due to habit loss, insecticides or climate change.

Posted by Margarethe Brummermann at 12:54 PM