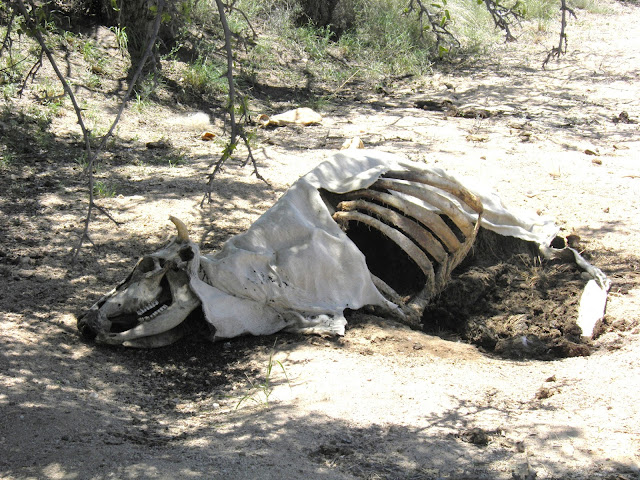 When you walk long enough through lonely stretches of desert, you'll eventually find a carcass. It's a valuable source of nutrients for many insects from Honey Bees (!) to Blow Flies, Dermestid Beetles and many more.

True entomologists would study a sight like this closely, to find interesting specimens. With experience and  comparative data, it is possible to deduct a timeline for the process of decay determining the kind of insects present as well as their state of development. This is used in forensic science.

"During this decomposition, the remains go through rapid physical, biological and chemical changes, and different stages of the decomposition are attractive to different species of insects." Gail S. Anderson, American Board of Forensic Entomology, School of Criminology, Simon Fraser University

Insect species arrive, lay eggs, larvae feed, walk off to pupate all in a rather strict and timely pattern that gives reliable clues about the time of death. So both species identification and knowledge of the ontogeny of the insect in question are important for the evaluation.

I was once asked to work for the LAPD on desert sites because of course desert cases progress under conditions different from cases in other climates and we also have our own specific set of  insects here. I declined, and I also did not check out the cow I found in a wash behind 'The Thing' on interstate 10 in SE AZ too closely (July 10, 2016).

But on one of my first excursions to Madera Canyon with Eric Eaton, he pulled out his long forceps and lifted an older cow hide, so I got to see many of the clean-up crew scurrying quickly into hiding. The two above were among those very late visitors. The rove beetle was probably not scavenging but actively hunting, preying on the scavengers and their larvae. 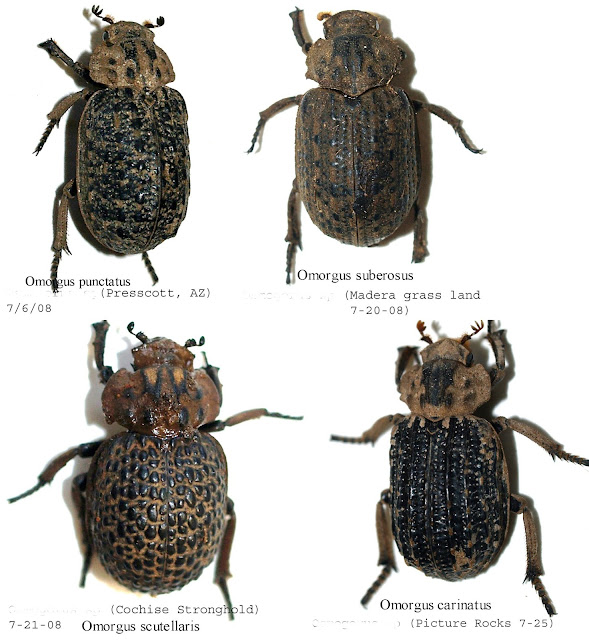 One of the last beetles on a very mummified and desiccated carcass is often a scarab relative of the family Trogidae (Hide Beetles). They show up when only bones and the hide are left - hence the common name Hide Beetles. You can also find them close to Coyote scat that contains a lot of hair. We have a number of Trox and Omorgus in AZ and all are quite similar. Bill Warner identified this group of Omorgus from AZ

Posted by Margarethe Brummermann at 1:11 PM