In Arizona, we do not have any synchronized 17 year cicada shows of the eastern United States. Instead, our cicada emerge year after year, each of our many species according to its own schedule and in its special habitat. Among our multitude of species are desert species and some that live in riparian habitats or mountain forests. 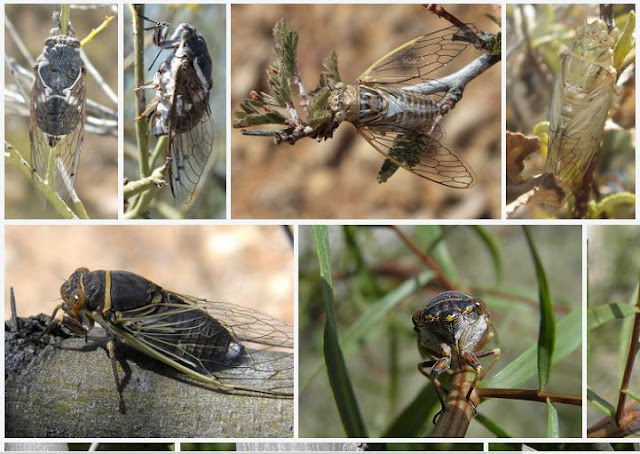 Their songs also vary from species to species: some shriek, some buzz, some only bang their wings, others sing in big orchestras that overpower any human communication. But all appear in the heat of summer and their singing seems to be the sound of heat, sunshine, and the longest days ....

All cicada develop from eggs that the females lay into the ground. Nymphs hatch and feed underground, sucking plant juices from tree roots. 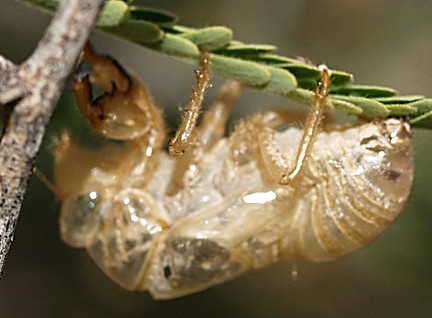 At this age their front legs are specialized digging tools as can be seen in the exuvia above. Invisible to humans, but sometimes pursued by digging predators like moles or rooting pigs, the nymphs steadily grow, molt when their inflexible skin becomes too tight, and thus go through four or five stages of development (instars), typical for hemimetabolic species that lack a pupal stage. 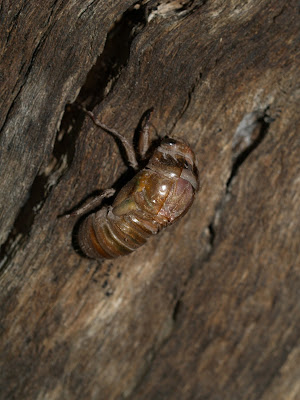 Fully grown, they finally surface. Now the nymphs climb up on surfaces rough enough to securely anchor the claws of their tarsi. They need to hang perfectly still during the next act, their last molt leading from nymph to adulthood.

The exoskeleton bursts open in the back of the thorax. This slit widens, the insect pushes out until head  and upper body is free. Hydraulic pressure is generated and expands the body out of the old shell. Linings of the old tracheae that are also chitinous and are pulled out and turned inside out like the fingers of a glove. Those are the white strings hanging off the exuvia.

The young cicada hangs backwards out of its anchored old skin. Eventually gravity pulls it out even further and faster.


Below: Linings of the old tracheae that are also chitinous and are pulled out and turned inside out like the fingers of a glove. Those are the white strings hanging off the exuvia.


Some photographers like to straighten up images of this stage for easier viewing. But for the animal, an upright position would simply not work and for any naturalist or biologist those images are obvious fakes.

Eventually, hydraulic  pressure inflates the 4 little folded appendages on the back of the thorax into fully functional wings that are able to transport the heavy body as soon as they are hardened.

Another generation of cicadas is ready to join the chorus of summer.

Posted by Margarethe Brummermann at 8:04 AM