As a biologist, I deeply dislike anthropomorphic interpretations of animal behavior. To me it's far more intriguing to try to understand animal behavior in its own context.
Here are some interesting interactions between prey species and predator.

'Herpers' who feed live rodents to snakes can attest to the fearless indifference of many store-bought rats and mice towards snakes. In contrast, wild, experienced rodents seem to be anything but indifferent towards rattlers. But terror and caution are not the only reactions.
I once observed Round-tailed Ground Squirrel running up to a rattler that was sliding towards the squirrels burrow. The agitated rodent (tail flicking and vocalizing) approached the snake several times and came within easy striking distance. The snake ignored him and determinedly slithered into the burrow entrance, leaving the fussing squirrel behind. 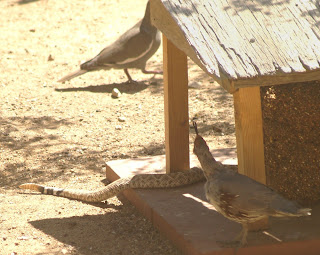 Today, loud mobbing calls came from the ground feeder for birds in front of my window. Quail were pointing with greatly elongated necks. Thrashers were fanning their tails and Doves were lifting their wings menacingly. All the birds were apprehensive and jumpy, but stayed in striking distance - of a Diamond-backed Rattlesnake. 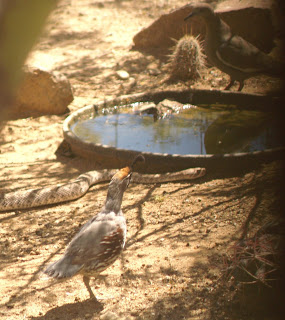 The snake ignored them, crawled into the cool shade by the bird bath and settled to stay. Its eyes were filmed over and blue - it may have been pre-occupied with molting. 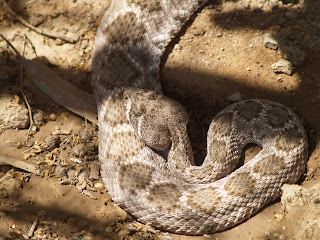 But it was now inside our dog-run and very close to our patio. So with my snake stick, I moved him into a container and carried him about half a mile away from the house. His tail markings told me that he's an old acquaintance - I'd carried him away before. 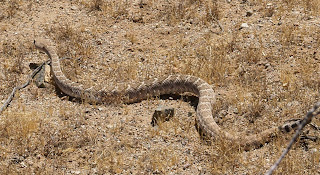 When released, he took off quickly. May he stay away this time. 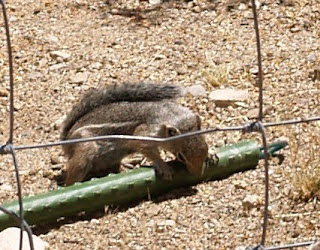 When I returned to my window seat there was another commotion. I had dropped the green snake stick where I caught the snake. Now a Harris' Antelope Squirrel was sniffing intently the tip of the stick. The snake end. The end that scares my dogs as much as a live rattler. The end that even smells of snake to my insensitive hay-fever impaired nose. 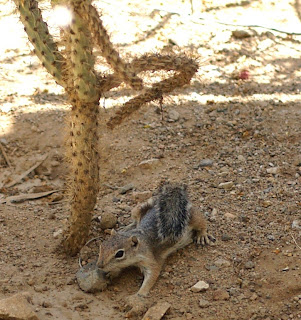 The squirrel then crawled around where the snake had been coiled. Followed the still visible tracks. Laid in the sand where the snake had rested. Came back to the snake end of the stick at least four times, sniffing, tail flicking excitedly, and ignoring my camera. (These guys are not tame and usually rather unapproachable.) 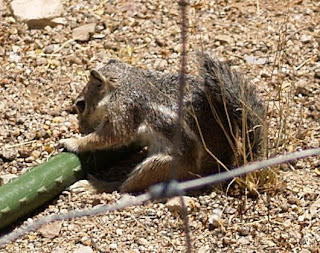 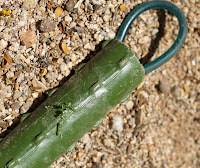 Then - finally - he jumped the noose end of the stick and started kicking, clawing and biting it. Leaving his toothmarks all over it (click to enlarge).

What the???
Posted by Margarethe Brummermann at 11:54 AM