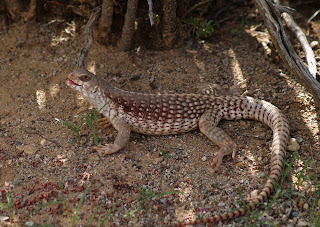 We live in the Bajada of the west side of the Tucson Mountains. Yesterday morning my husband Randy, our dog Cody, and I went to the eastern part of our property to check out the blooming chollas. A Desert Iguana Dipsosaurus dorsalis was bobbing his head in a territorial display. They aren't very common here and I'd found one of them dead this spring, so we were very happy to see this one.

Then the short dry grass right behind the big lizard moved and a snake slithered by, not two feet from him. The very straight movement identified it as a rattler, other snakes move in a more undulating manner. Where lacy Creosote shadows and its own markings made it nearly invisible, it flattened itself to the ground. Snakes, who have no sternum, actually spread their ribs to do so. T 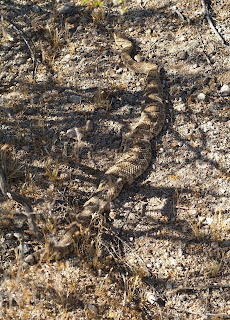 his pose allows them to absorb a maximum amount of heat from the warm sand and from the radiation of the sun. It eliminates most of the cast shadow which hides the snake even better.
This snake turned out to be a female Mojave Rattler, Crotalus scutulatus. Thanks, Brendan O'Connor, for verifying my identification which was based only on the wide white /narrow dark bands of th 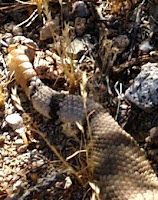 e tail. More reliable diagnostic markers are the facial scales and the band that runs from the eyes to the corners of the mouth. I didn't want to get close enough to record those with my 50 mm Macro lens.

We left the rattler alone - with trepidations. Rattlesnake venom is mostly haemotoxic, extremely painful but rarely deadly to larger animals and humans. But with squirrels becoming more and more immune to it, Mojave Rattlers co-evolved by producing a neurotoxic venom component known as Mojave Type A toxin- which puts them in the same class as the deadly Cobras.
This snake had a very small rattle for her 2.5 foot body length. A rattler adds a section to its rattle each time it sheds its skin which happens several times per year. This one must have broken off parts of it. She also never bothered to rattle even though I was very close. 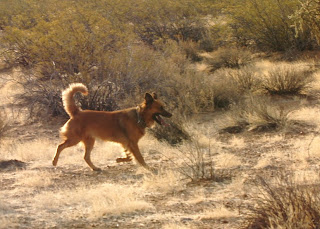 Cody was strolling around but never noticed her. He is snake trained (the hard way) and he flinches even from black and white ribbons, curved branches, or the smell of my snake stick. Occasionally he's fooled by a Gopher Snake. He has a clearly recognizable, rhythmic 'snake bark' that will alert me from my deepest dreams. Rolling out of bed, grabbing some shoes, the snake stick and a flash light, then locating and holding the snake until Randy arrives with a container, has become the routine of hot summer nights when the snakes seem to follow the walls of our house right to the patio and the dog beds. The following morning we carry the captive out to the adjacent State Land for photo shoot and release. From May to September last year we had to move 14 Diamondbacks from patio and dog-run. Elsewhere on our property we leave the snakes alone and appreciate them with the rest of 'our' wildlife. 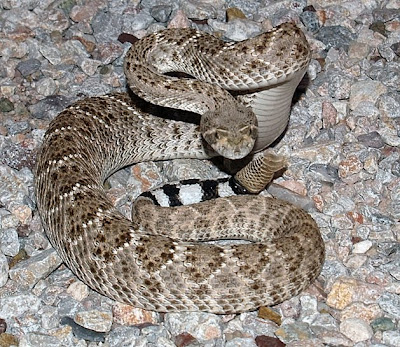 Posted by Margarethe Brummermann at 11:23 AM