Where are the bugs of Mount Lemmon? 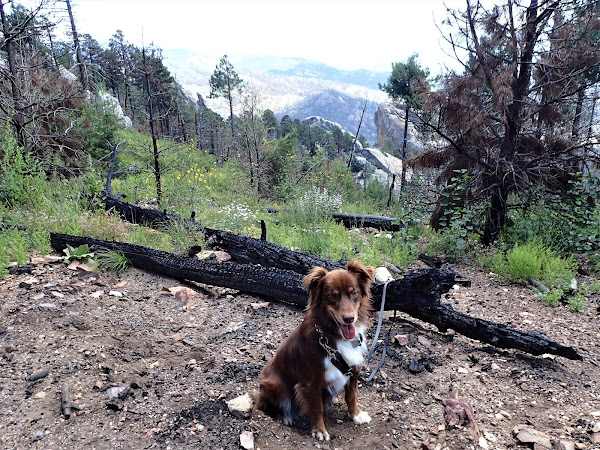 Yesterday, Randy and I took Chaco for a walk high in the Catalina Mountains, above Ski Valley, so above 8000 feet. It was refreshingly cool with a big cloud accompanying us most of the way. We gladly accepted the shade, because Meadow Trail first loses a lot of elevation in narrow switch-backs which we had to regain later on Mount Lemmon trail. 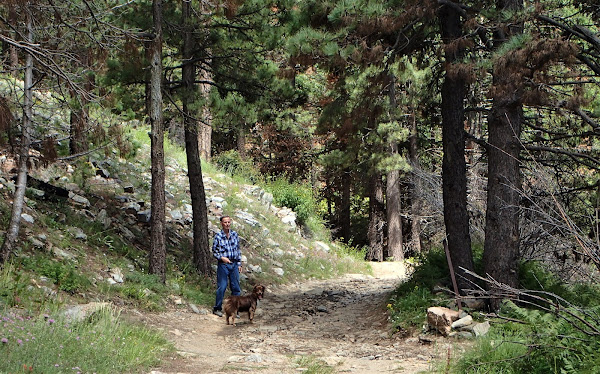 We are very happy that Chaco has overcome his old insecurity. He used to bark and growl at strangers who suddenly appeared, humans and dogs alike. He likes most humans now. A treat can convince him that most dogs are okay as well. It took him a good a year with us to gain this confidence, but it happened over the course of 2020, during a year of nearly complete isolation. So actively socializing a dog is not necessarily the only way to train a dog to be accepting of and friendly to strangers. Interesting 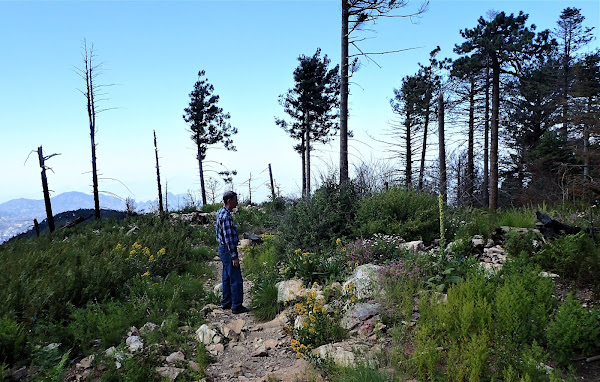 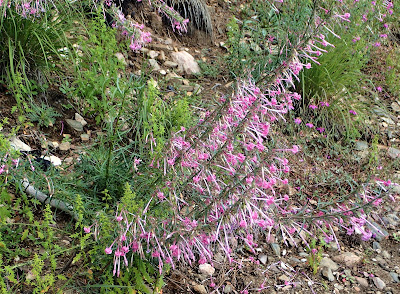 The landscape is still wearing scars of 2 big fires of the last decade. After some real gushers last week, scars from flood-erosion are also obvious. Still, forest and meadows are gloriously green and studded with wildflowers. I got the impression that some, like Gilea and Verbena, are blooming late this year, so they are adding their pinks and purples together with wild Geraniums, New Mexican Thistles and Cornflowers to the yellows of Golden Columbine, Sneezeweed and Golden Route. Path borders are accented by the deep blue of Day Flowers and the red of Penstemon. Very pretty also a blue-blooming night shade with leaves like a potato plant. Spotted Horsemint, Monarda punctata, stood out in big healthy clumps. More pale pink or white of fleabane, and Common Yarrow. 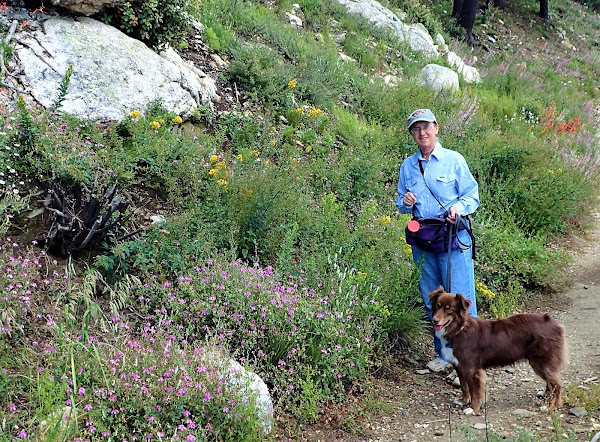 With so many wildflowers, we expected to find interesting insects. A Yellowjacket joining us at our early lunch in the picknick area seemed promising. And butterflies, mostly Sulphurs and some Queens, were in the air, some few Painted Ladies on flowers. White-lined Sphinx buzzing like Hummingbirds. A few Honey Bees. But no Bumble Bees, no Longhorn Bees, the only beetles were tiny Dasytine Melyrids. Hardly even any Bee Flies. No big wasps and Carpenter bees on the inviting stands of Monarda – nothing. 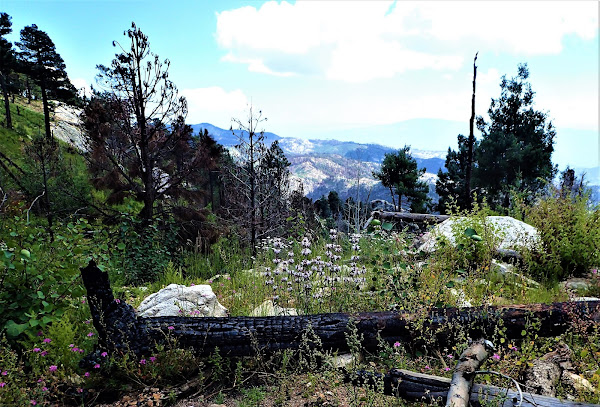 A sad little group of 5 Convergent Ladybugs on the tip of a Sneezeweed leaf. There used to be thousands on the mountain at this time of the year (I hope I just missed the right spots?). When we got back to the car, I made a last effort using my beating sheet. Randy and Chaco went into hiding. Around the trailhead parking lot are stands of Aspen and mixed conifers. I always found Interesting Ladybugs, Weevils, the occasional Longhorn (Neoclytus) and many spiders in my sheet. This time I got nothing from the conifers and one Mirid and some ants from the Aspen. It was quite discouraging. Before we got into the car, I finally photographed a single Syrphus opinator that was hanging out on an Aspen leaf 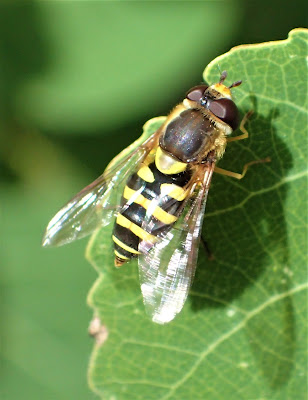 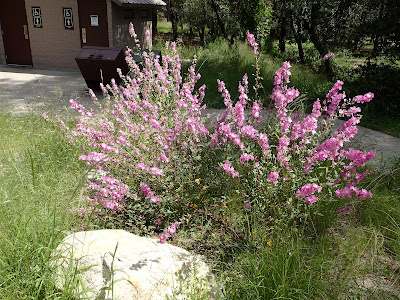 On the way home I was trying to convince myself that the low temps on the mountain top had driven the insects into hiding, so we stopped to admire 2 amazing, pink blazes of Mallow at Middle Bear at medium elevation, before continuing to Molino Basin. Low enough for some desert vegetation to thrive, but still supporting several species of oaks along the creek (running brown with tannins) Molino Basin is usually rich in insect species. But this time I learned why bind weed, or morning glory, has such a bad rep in Arizona that most species are prohibited in commercial sales (we had always found that restriction quite ridiculous). 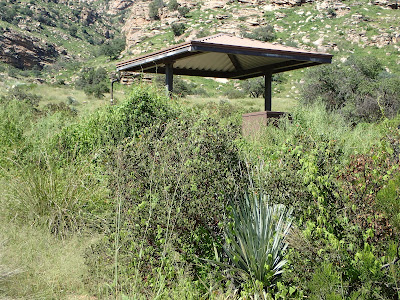 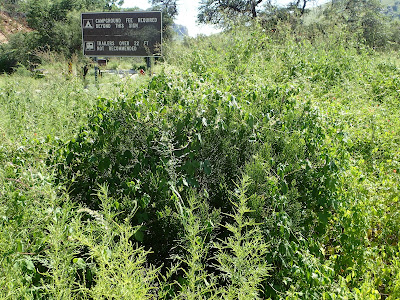 But at Molino, in August 2021, you’d quickly understand. Bush after bush of Mazanita, small oaks, Desert Broom and even fast growing, freshly sprouted Datura were completely covered in a thick suffocating layer of Bind Weed. Not all were in bloom, but from those very lush and intricately lobed leaves I could tell that at least 4 species of Morning Glory were involved. Surprisingly, the delicate Scarlet Creeper, Ipomea coccinea contributed a lot to the chaos. So no Euphoria and Longhorn beetles on those Desert Broom bushes. Just a lot of flies (house flies?) that got into our car. Maybe even they had decided to leave the mountain.
Posted by Margarethe Brummermann at 4:09 PM