Carabidae from the Portal Coleoptera Course

From earliest insect systematics classes at the University of Bochum, Germany, I had a special fascination for Carabid Beetles. In English, they are unimaginatively called Ground Beetles, but the German name Laufkaefer does a little more justice to these fast, fierce hunters. In Germany the genus Carabus dazzled with some rather large metallic, colorful species. 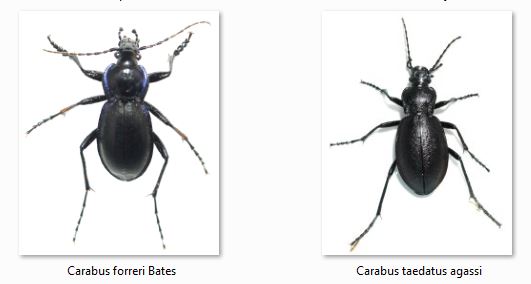 Here in AZ, that genus is represented by only 2 species which are large and impressive, but comparatively dull in color.  During the course, I looked for them at Barfoot Park but this time, they were only found by some friends who really specialized on carabids and searched at night.

In Arizona the genus Calosoma with its several subgenera is much more prevalent than Carabus and at least one member also makes up for the lackluster appearance of the other large US Carabids. During the course, we saw surprisingly few, and mostly black species in a desert wash along Foothills Rd. I did not even photograph any. 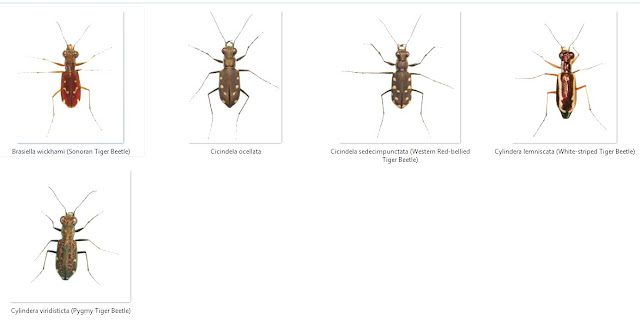 In the desert, we also had the largest diversity of Cicindelinae (Tiger Beetles), as shown above, not a lot. 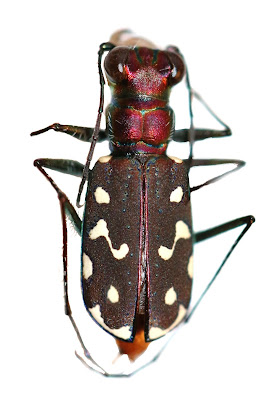 We also looked for the recently described   Cicindelidia melissa  that seems to be limited to the road to Barfoot Park, but we did not see any of those.

Around Barfoot and Rustler I also found a few Cychrini under logs in moist places. With long heads and mouth-parts, they are adapted feed on snails. So in Arizona, their food source is limited to the high elevations of the Sky islands and they do not move away from those confined areas. I believe that they are flightless. Speciation  is beginning.

Currently the populations on Mount Graham, the Chiricahuas, the Huaschucas, the Sta. Ritas and the Catalinas are considered subspecies.
All those larger Carabids in the subfamily Carabinae are sought after by collectors. This time, to me they were mere by-catch. I was much more interested in the plethora of smaller species. I like the colorful Lebiini that are colorful day-active flower visitors but still oblige by coming to lights at night. 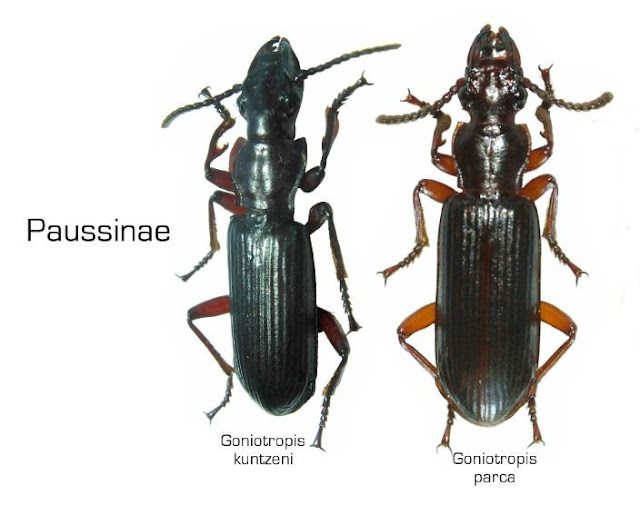 I also searched for Wendy Moore's Paussines that she had introduced in a very interesting talk during the course. I had found some at Pena Blanca Canyon and also in the Huachucas, but it would have been interesting to see them running up and down oak trees in the Chiricahuas. No such luck. We found Brachinus spp. along the creeks and at our lights, but none of these great, dangerous looking beetles. 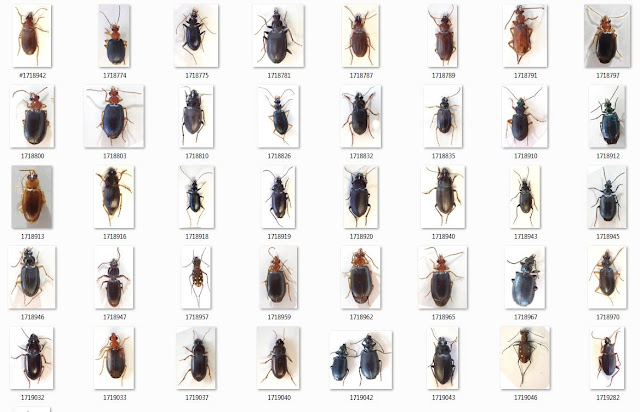 This time I was after all those dark Harpalinae that are (to me) quite hard to identify all the way to the species. Luckily, I have an agreement with Peter Messer who has spent endless hours familiarizing himself with characters like single hairs on palps and groves on tiny foreheads. He lives in the eastern US, but as usual, the most interesting diversity is found here in AZ.  So I am collecting and photographing my beetles as well as possible, and place the result on BugGuide.net. The number that Bugguide assignes is included with the collection data, to be shipped with the specimen to Peter,  for species id and to stay in his voucher collection. He will add his id to my photo on BugGuide. It's perfect, because for my AZ Beetle book I need the reliably identified images, but I will also always know where my voucher specimens are curated.

I was especially happy to find a small species whose elytra show an unusual pockmark pattern: the little Harpaline Sericoda bembidioides. I only found this species once before on Mount Lemmon. It is known to be attracted to areas that suffered an extensive forest fires. Mount Lemmon back then, just as Rustler Park now, were indeed heavily marked by fire. In both cases the time of the actual catastrophic burn was more than 5 years in the past.  But last year I watched forest rangers and firemen build pyramids of cut logs everywhere in the forest. The logs were from fallen trees and from those that were felled to thin the tree stands. The rangers told me that they would let the wood dry and then wait for wet winter days,  preferably with thick snow cover, to burn these piles of logs. They had in fact disappeared by now. This practice seems like a terrible waste and source of unnecessary CO2 emissions. But it seems to maintain pockets of habitat for this interesting beetle.


Posted by Margarethe Brummermann at 1:07 PM