Over the last days I saw several comments on our Facebook group from concerned folks who questioned collectors of beetles who showed a well-curated series of Dynastes grantii. Today I got an e mail from a concerned lady who is finding dead Rhinoceros Beetles in Prescott Valley.

I am very glad that people do care! Even if their target for now are mostly those charismatic big Scarab Beetles. It is hopefully a sign that they will also worry, and get active, to help shape the greater environmental picture.
But in the SW US Arthropods Group that I administer on Facebook, I also had to explain why I think the collector of some Hercules Beetles from 2017 was not harming the environment or the species or ethical standards by taking these 9 male beetles.
Since it took some effort to answer this and because it keeps coming up, here is what I wrote:

I think many people do not consider how most insects propagate. There is no parental care - there cannot be because the short-lived adults are not around when the larvae hatch in January/February to start their multi-year growth period as larvae. So each female lays from 30 to 90 eggs at least, some of which will actually survive to adulthood. If a female dies before her time, before she is done depositing her eggs, some more of her neighbor have room to survive. Males probably sire even more offspring - the few that actually get a chance to mate with a female in a competitive mating situation. If some are collected, again, more chances for the remaining ones. These are not humans or elephants with great investment in the individual. Also, if 90 come to a given light with a limited radius, thousands must be in the hinterland. What destroys insect populations is not a collector. It's habitat destruction and maybe some really strong light (border patrol? ) that drain the area night after night of millions of bugs, If they are collected or not, those usually die at the lights.
To be clear, I'm no collector and I only see reasons to collect (personally) if scientific questions are behind it. But that's just me. I know that humans by their very existence are detrimental to great numbers of other species. But I also know that most people do not care one bit about insects and think the more are destroyed, the better. If Neal Mower's pretty collection gets a couple of kids interested enough to be protective instead of habitually destructive, I think his efforts are well validated .
6
Edit or delete this 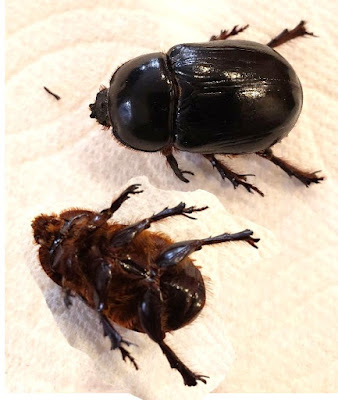 and here is the e mail about the Rhinoceros Beetles from Prescott Valley:
Good morning,
I saw your article on rhinoceros beetles and it was the most informative one I found. Recently there has been an event near my house in Prescott Valley where we have seen hundreds of female beetles crawling around during the day. I have not been able to find a reason why this is happening due to there not being a lot of information on these little guys. We found a lot of them tipped over yesterday and spent some time flipping them. This morning we discovered most of them dead. I was hoping you might have some further explanations for the behaviour. I have attached a photo of one we found this morning. We have spent the morning trying to learn as much about them as possible but have been unable to find more info. Thanks for taking the time to read this, I hope you have a wonderful day!
Jessie D.

And my lengthy answer:
I am glad that you care, Jessica! But there is not a lot that you, or anyone, can do.
These scarab beetles spend most of their lifespan as grubs feeding on rotting wood, somewhere in the Coronado forest around Prescott. Then they pupate, later the young beetle emerges from the pupa, and then it waits for the monsoon to begin to emerge from its pupal chamber. Now it has wings and will use them first to find a mate and then, if she is female, to find a suitable place with great mulch for her eggs. She seems to prefere rotting mountain ash logs over all other mulch.. There is a theory that she will first play it safe and lay most of her eggs close to where she herself was born, and then, much lighter after depositing most of her load,  strike out to carry the last eggs further out to maybe give the last offspring new opportunities in less crowded areas. This is just a theory, but possible. We find older females often far from the normal distribution areas.  Of course, the end of this journey for the female is death. As adults, most scarabs live only for a couple of weeks to a couple of months and the males die earlier than the females.  Now the reason that you find so many wandering around in the morning is that they most likely came to lights at night. They usually orient by the moon and artificial lights drag them off course. That uses up resources and there is probably no food where they land (they feed on sugary substances)  The reason that they die (if pesticide use can be excluded) may be that they are old and at the end of their natural life. The specimen in your photo has its feet broken off. That can happen ante-mortem in old beetles. Old, weak beetles also will not bury themselves during the day as fresh vigorous ones would do, so you find them crawling around in the morning.
So you really cannot help them individually at this point. Hopefully they had a chance to lay their eggs in a suitable place before they landed at the lights. And you can assume that there are many more where they came from that will take care of the continuation of their species. If you can convince home and business owners in Prescott Valley to use lights with little UV component (yellow or some led lights are good)and no Mercury Vapor, you may be able to reduce the draw on the beetle population and spar the home owners some of the dead beetles that clutter their porches
Again, thank you for caring!
Margarethe Brummermann


And maybe we all can help by influencing those in power by writing to them and through our votes to consider the problem of habitat disruption through high power lights. For years, we have seen the impact of the light canons that the border patrol was using every night at their control points on I 19 and Hhw 83. The stinking carpet of dead beetles at those light was so bad that the officers kept asking traveling entomologists for help. We could only say: Switch off those light canons'  In the end it was cost efficient new technology, not our advice that changed the mercury vapor lights to LED lights, but now dead beetles are no great problem anymore. I can only hope that all the recent border protection activity will not result in an illuminated corridor all the way along the southern border. That would have a disruptive effect on more than just beetles and could have dire ecological consequences.


So let your representatives know that you care!

Posted by Margarethe Brummermann at 12:13 PM