The First Coleoptera Course at the SWRS in Portal 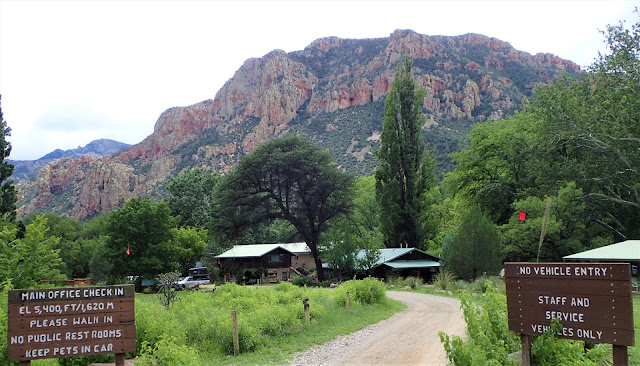 I just returned home from the inaugural, 10 day Coleoptera Course at the South West Research Station in Portal, AZ. We hardly noticed that this was a first - it ran so smoothly.


Steven Lingafelter was the Lead Coordinator and did most of the planning and preparations for the 2019 Coleoptera Course at the Research Station in Portal, Arizona:  After he took and enjoyed the long established Moth Course in 2018, he brought the idea for a Beetle Course to the station management and then devoted weeks (months?) of work to the project. It must have been a huge undertaking and it turned out so well!

Among all the other things, Steve prepared a reference library, a teaching collection representing all relevant beetle families, and 14 Smith Boxes with examples of 50 families for all students to practice their identification skills on. I helped to collect the specimens for those boxes - that's mainly how I became a course assistant.

I had printed out over 30 pages of images that I have prepared for my and Art Evan's Book Arizona Beetles. Before the course, I only made it to family Tenebrionidae (my PC crashed a week before),  which means there were 1267 identified species depicted (of the about 2000 that will be in the book). During the first days of the class, the ring binder with those images was used quite a lot for species identifications. Later people got more involved and confident with the keys, and were working mostly with difficult to photograph small specimens.  I tried to photograph those during the course to the abilities of my camera equipment to later add them to the book. 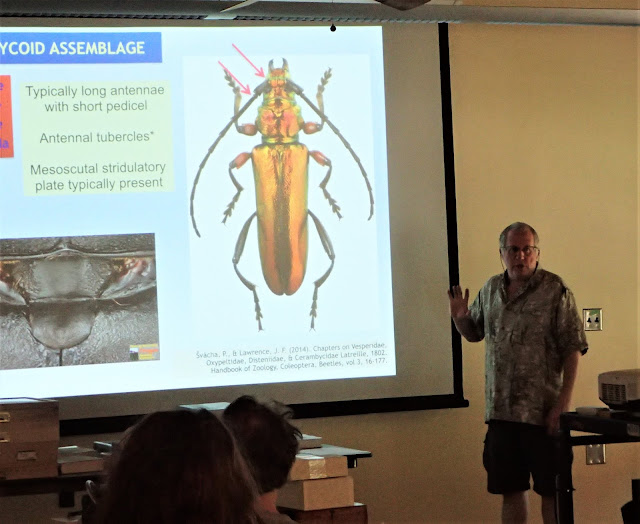 .
Every day started with a lecture. Richard Leschen flew in from New Zealand to be the Lead Instructor. He gave a series of very focused lectures on diversity, morphology, classification, and identification of beetles. I am no systematist, but I feel that I learned a great deal. I am grateful that he made the lectures available in print and file. It relieved us from painstaking note-taking and provides a useful base for further study.
Rich was supported by knowledgeable input from Matt Gimmel. Matt also introduced an electronic interactive identification key. Differing from the usual dichotomus keys that are based on a fixed series of character couplets, this key lets the user decide on the approach that seems most accessible. A very interesting tool that I will have to explore further.

Christopher Carlton, supported by  Brittany Owens, instructed us in the use of a diversity of traps for collection: V-Flight intercept, Malaise Trap, Pheromone traps, insitu sleeve contaiment,  Berlese funnel were demonstrated and put to use.  He also explained special preparation methods of delicate specimens that made somewhat hidden components of the exoskeleton more visible under the compound microscope.. 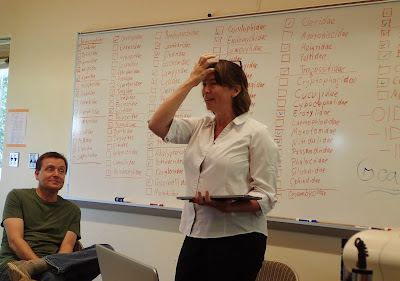 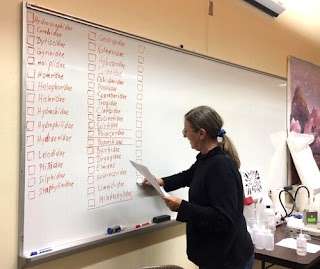 On the first day, I wrote on the white board a list of the 100 beetle families that we were most likely to find according to Matt's predictions.
When beetles were collected, the relevant families were tagged. As to be expected, he large, most obvious beetles were soon found and tags appeared on the first 50 families rather quickly. Further families were added more slowly, after tiny beetles that many of us tend to overlook or ignore where found and analyzed.

Searching different habitats (creek and ponds) and the catch from traps and filters added many of the more elusive families. End result: 71 families in 9 days. Pretty impressive!

The lab was well equipped with a good modern microscope and light source for every student, and we spend many hours bent over tiny specimens. The class dynamic brought back memories from field stations during my student years -  concentration, cooperation and long hours. 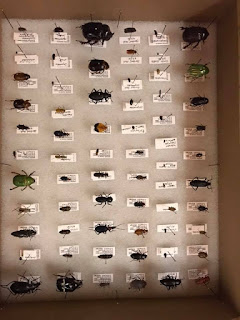 People appeared before breakfast and stayed long after the last black lights outside had been checked. Personal collections, beetles pinned neatly on styrophone boards, grew on every desk. (I only identified and photographed my specimens)

The station has convenient lodging and dining facilities, making it perfect for courses and also individual researchers. Meal times and procedures are quite strictly regimented and announced by a deafening noise, produced ranch style by banging on a metal triangle. Long lines form. The food is well worth it.

The Research Station in Portal is located in the heart of  one of the high-diversity areas on the planet.  A main component of the course were field trips into the higher Chiricahua Mountains and the surrounding desert. I think that the breathtaking beauty of the surroundings cannot be underestimated as an inspiration to unlimited exploration.

Despite the full schedule, students with interest in special families, like Buprestids, did find time for their own excursions. The famous Buprestid from Desert Willow Rd was found in small numbers by several participants.

I fished the usually terrestrial scarab Gymnetina howdeni out of the swimming pool. It's the first time I got hold of a living specimen. They usually fly high in the tree canopy and seem to only fall to the ground at the end of their lives. 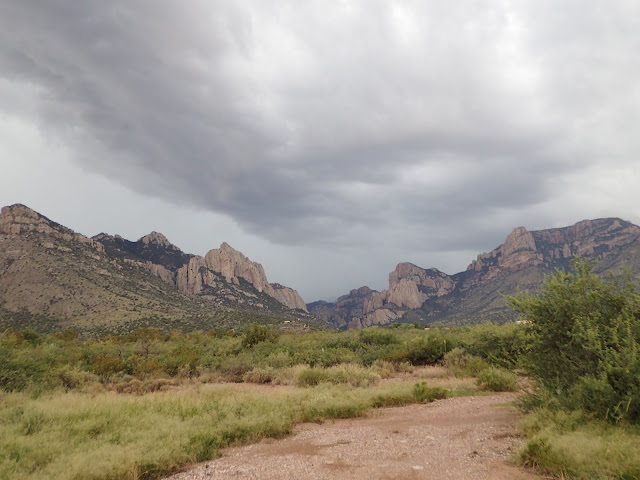 The desert habitat along Foothills Road provided very different beetles from those of canyons and forested mountain tops. We black-lighted there in a wash - rain was not in the forecast, otherwise flash floods could have surprised us. The photo above is from last year.

Folks to whom desert habitat is as exotic as rain forest would be to me returned during the day to check out Barrel Cactus and Opuntia patches surrounded by vast stretches of Creosote and Mesquite.  Perennial flowers that usually bloom there at this time were still delayed by the late onset of the summer rains. I hope they will be ready in time for the bee course that directly follows  our beetle course. 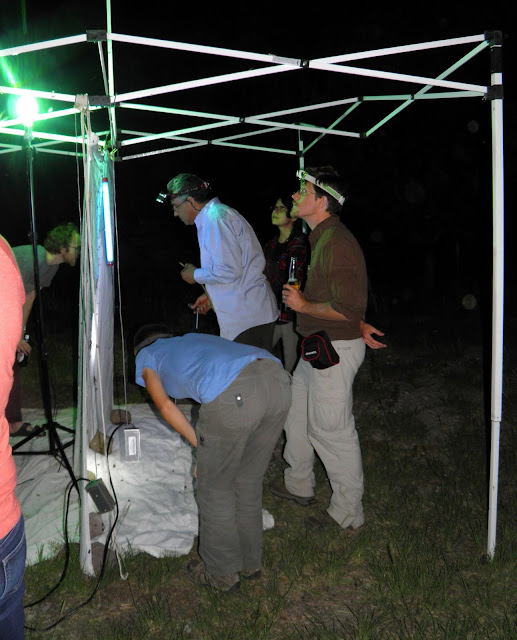 Every night UV and Mercury vapor lights attracted beetles and rather competitive collectors alike.  For the next course, we may want to slow down the sheet collection somewhat, so more students can actually see and enjoy the beetles. Moth will remain free for grabs, though.

We also had some uninvited guests helping themselves to 'our' bugs. Skunks, visiting at night, became quite habituated and never threatened to spray us. Acorn Woodpeckers, Canyon Wrens and Summer Tanagers could be seen at sunrise, cleaning the sheets off last night's bugs.

The classroom was open 24/7 and although I slept very little, I never found it empty. Some people seemed to be at workaround the clock. We did have some party time off, but by then we were all so tired, that only the great blue grass music played by 4 very talented members of the group rescued the evening. Loved it! Here is a link to Flickr because my recording is too long to be posted directly to this blog 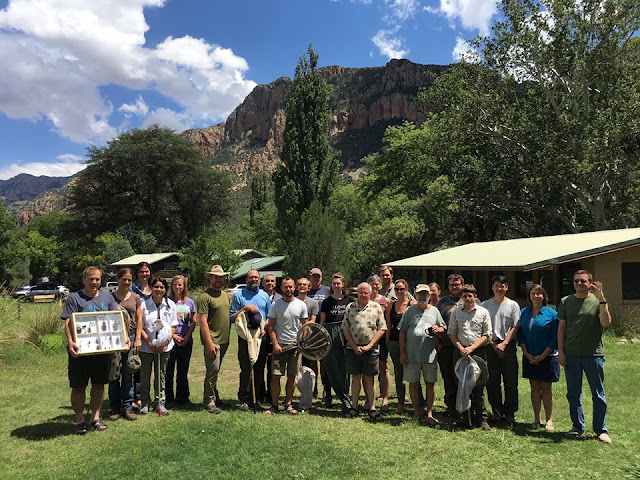 The students in this first class were nearly all all professionals with a good deal of experience. Most were identifiers or entomology professors. This was a hand-picked group that will hopefully give valuable feed-back after this first run. 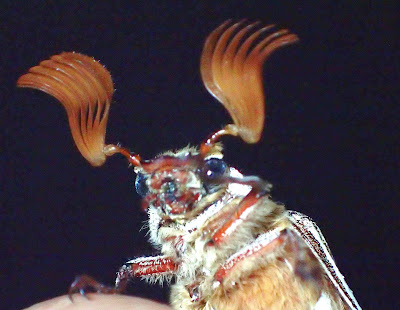 The Bee Course at the SWRS, which is the oldest of the courses and a model for the newer ones, is now in it's 35rd year and still has long waiting lists for applicants. So - lets see how our Coleoptera Course is doing in 35 years!

Posted by Margarethe Brummermann at 11:14 AM