Animals in their Habitat: Roadrunner 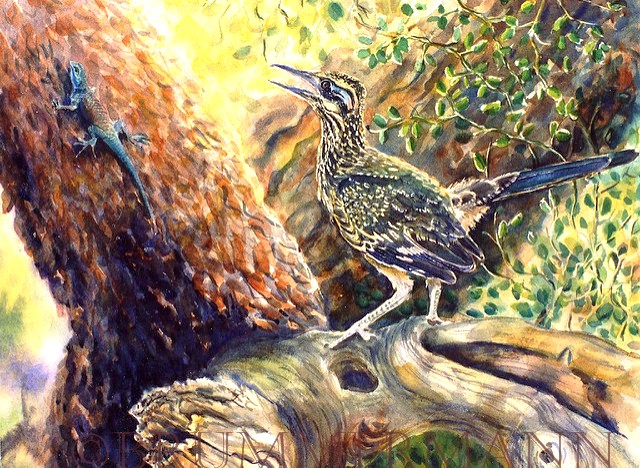 Roadrunners are one of the icons of the deserts Southwest. They are most often depicted running through open spaces of sun-bleached sand with maybe some cactus, or, cornier, an even more bleached cow skull in the background.
But our huge raptorial cuckoo-birds would not really like that cliché landscape too much. While they are tough enough and very adaptable and often run rather than fly, they still appreciate the low trees of the thornbush chaparral just as much or even more than the wide open desert.
Their nasal wouw-wouw-wouw calls are most often heard from the height of an ironwood or mesquite tree, and later I see our resident bird up there all fluffed up, turning exposed patches of his black skin towards the morning sun to absorb the warmth. I know he is perfectly able to regulate his bodytemperature by autonomous means (shivering, panting) - much better than for example the tiny hummingbird - but he seems to prefer those primitive behavioral ways.
To me, that makes him seem even more like some ancient saurian velociraptor that his sharp profile and strong running legs remind me of. Fast, fierce and insatiable and smart. Even the tiniest, blind nestlings can swallow whole lizards that the parents provide. Adults catch everything that moves, from tarantulas to House Finches to rattlesnakes. One was filmed while catching hummingbirds at a feeder. Roadrunners are probably the greatest  menace in the young lives of baby quail.  When our cat got out last summer, he came racing back with a Roadrunner in angry pursuit.
And yet - I'm delighted each time I catch a glimpse of a speedy runner or hear their fast, clacking ratchet noises in our backyard.
Posted by Margarethe Brummermann at 6:56 AM