Desert animals in their habitat: The Owls of Sabino Canyon 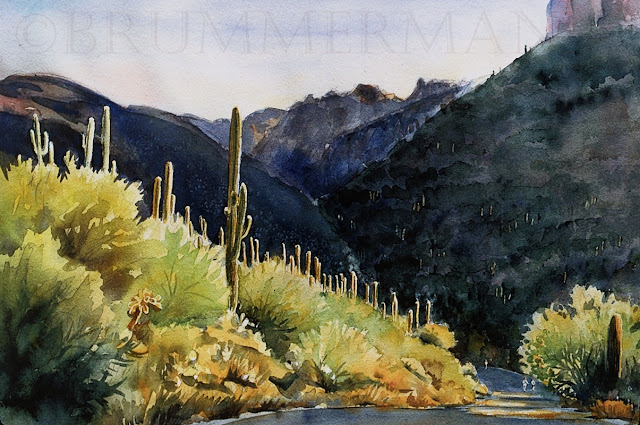 To me, this is also a painting of wildlife in its habitat. If you can't see it, close your eyes and listen. There: the hooting call of Great Horned Owls. I have never hiked the area at dusk without hearing them calling to each other. In fact, a Native American friend who was often with me felt their presence so keenly that they made him uncomfortable (I did talk him out of it). Why is it that owl...s have such a bad reputation in many traditional cultures? When I was a kid in Germany, my mother thought that owls might have been drawn to windows that were illuminated at night and in the old times that often happened when someone lay sick or dying. So they were thought of as harbingers of death. Anyway - I'm glad we moved away from those superstitions and can enjoy our owl sightings now. Not all old traditions are to be cherished.
Posted by Margarethe Brummermann at 9:13 AM