While sorting the slides for my first ever public talk, a presentation about insects in our local forest in Westphalia, Germany, I found that about 75% of my more interesting photos showed insects in some kind of sexual activity. I was 17, my audience mostly older gentlemen from the local zoological society, and I felt somewhat embarrassed. I got over it and the talk was a success. And think about it: Adult insects, stuck in their stiff exoskeleton...s, aren’t exhibiting too many visually impressive behaviors. They eat or get eaten, or try very hard not to, and they mate and lay eggs. But mating may involve calling, scenting, lekking, courtship and pursuit, dancing and rejection, rape, gift giving, copulating, decapitating, mate guarding …. There is plenty to observe and photograph. And even the most flighty Tiger Beetles tend to slow down for a while …

For animals that do not live in social groups, finding an appropriate partner is the most important part of mating. Pheromones released by one partner may stimulate extremely sensitive olfactory organs of the other gender - and matches are made.
When the Mesquite trees are blooming in the Tucson Mountains I sometimes find the catkins of single trees covered in net-wing beetles. They are nearly all mating pairs. They probably attract each other through pheromones. But there are usually beetles of 2 different species present. Pheromones of closely related species can be similar or identical, so there must be an additional process of mate recognition to match up the correct partners. Lycids are loaded with toxins, so these aggregations may not only allow the beetles to find mates but also protect them against predation.


Antennae of most insects are the site of incredibly sensitive chemoreceptors but in Melyridae (Soft-winged Flower Beetles), the male's antennae carry big, lumpy extensions. You can see them on the right beetle. Those are not receptors, but producers of stimulating chemicals. On this occasion he was waving them at her, stroking her antennae, doing a whole dance of seduction with them, but she still rejected his advances in the end.

Most biologists define a species as a group of genetically similar individuals that can produce viable offspring by mating under natural conditions. Several beetles in Arizona appear in drastically different color morphs. But they are definitely conspecific because they mate and produce offspring indiscriminately of their color morph. 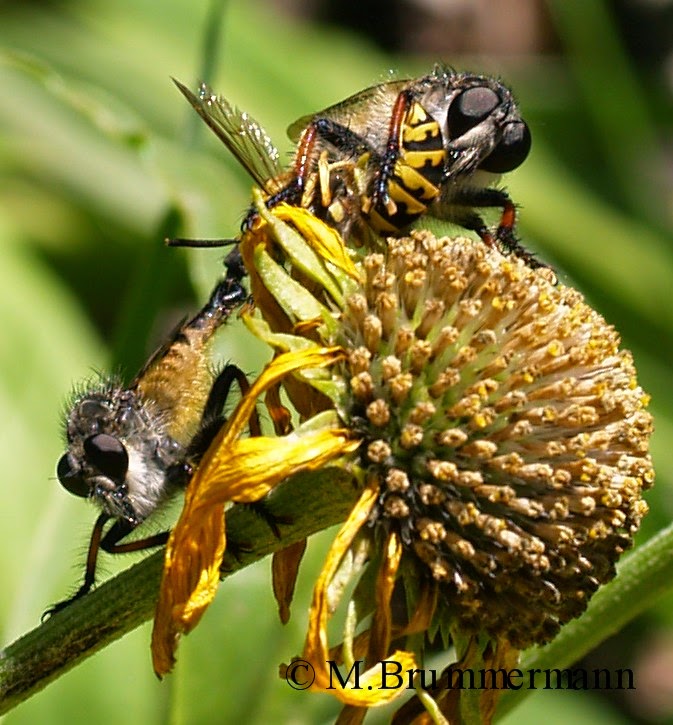 Approaching a female can be risky for males of aggressive predatory species that are used to taking prey that is hardly smaller than they themselves. Several groups of diptera (flies) have developed ritualized gift-giving which appeases the female. I am not aware that these big Robberflies actually do that, but this male did successfully grab his chance while the female was busy feeding on a Yellow Jacket.

Dragons and Damsel males have secondary sexual organs.
Prior to mating, the male moves sperm from his primary genitalia at the end of his abdomen to the middle of his body where he stores it in a secondary genital location. When he finds a female he grabs her neck/head/eyes with his claspers. Tandem position. She then reaches forward to position her cloaca against his secondary genital opening to receive the sperm. Their bodies now form the mating wheel.

After mating the two may stay together in the tandem position while she lays her eggs. This is mate guarding (against other males) but also allows the female to submerse herself to position the eggs under water while the male hovers above to pull he up.

When I saw the bees swarming a fence post at the Arizona Desert Museum I thought at first that I had found the hive of a social species. But they seemed too frenzied for worker bees. They turned out to be male Leaf-cutter bees waiting for females.
Leaf-cutter bees are solitary, but a good nesting site with many deep tunnels (beetle holes) may attract many females. Each lays multiple eggs in those tunnels, eggs that will become females are placed deeper inside, prospective males more towards the tunnel entrance. The males hatch first. Then they hang around the entrance, waiting for the females to hatch. No matter that some will be their sisters. On thing is certain: no female will run this gauntlet and leave a virgin.

Among social bees, only the young queens and few lucky drones mate. A young queen mates only once. She takes off with a part of the old hive's workers to start a new hive. There she will produce thousands of eggs from this one mating.
While the bees are swarming and traveling to a new location they often rest in the open, all clustered tightly around the queen. At this stage the crops of the workers are full of stored honey and they lack aggression. The swarm I found was very small, which might indicate that these were Africanized bees, but I could approach closely without problems.
Drones (males) are recognizable by their large size and their big eyes - I have focused in on one in the right photo. Drones do not forage and don't get fed after the mating flight, so at times they can be found dying under the hive. This is no indication that anything is wrong with the hive in general.

Leafcutter Ant colonies release swarms of winged males and females after generous monsoon rains in late summer. Clouds of alates hover like smoke columns over the nest exits. Young Acromyrmex versicolor queens mate with small-headed males in the air and tumble to the ground together. They lose their wings and the males die soon after. The queens are carrying the beginning of a new fungal garden in their crops with them. Several of them may start a new colony together.

While scouting in preparation for the BugGuide Gathering in 2013, I was caught in a July thunderstorm in Florida Canyon, Pima Co, AZ. Suddenly many insects were flying in the soft warm rain, most of them tumbling to the ground. There they quickly shed their wings and began running around in pairs. Soon predators like ants an birds began picking them up. But many couples escaped to find new underground nesting sites to begin a new huge family of Termites. Different from ants, wasps and bees, they will have a long fertile life as a couple ahead of them.

And what do bugs do instead of on-line dating? Black light dating! Always available during the monsoon months in Arizona and highly recommended ....


Posted by Margarethe Brummermann at 7:28 PM