Of course, arid Arizona does not seem to be the very best place to look for aquatic life in any form. But we do have a few riparian areas left, some permanent creeks and cienegas, some artificial lakes, artesian ponds, rivers that carry mostly treated waste-water and of course many temporarily flooded areas during a good monsoon season. But where there is water even temporarily, there are always many interesting creatures.


Predaceous Diving Beetles (Dytiscidae) were always among my favorite aquatic insects. As a kid in Germany, I used to raise the huge, fiercely predatory larvae of Dytiscus marginalis, one of our largest beetles. But here in AZ I came to appreciate also the beauty of some of the smallest members of this family. Although so prettily patterned, these 4 mm long, fast swimmers are nearly invisible in the tannin-colored water and against the mica glittering sand of Sabino Creek.
Note the air bubble that is held under the elytra. When the beetle has used up oxygen from the original air, fresh oxygen diffuses from the water into the bubble. It's a physical gill. From time to time fresh air needs to be collected at the surface because the bubble constantly looses nitrogen to the water, which cannot be recovered, so it keeps shrinking. The beetle does not need the nitrogen per se, but it needs to keep up the volume of the bubble to allow for the exchange of O2 and CO2 with the water. So occasionally, it comes to the surface for refills.

Here is another beauty, the Sunburst Beetle. It's larger than a penny and catches the sunlight very nicely when it swims in flat water, propelled by strokes of its modified hindlegs.


Most Water beetles like Hydrophilidae and Dytiscidae lay their eggs under water, their larvae are aquatic, but to pupate, they have to come on land. I collected pupae under drift wood at Watson Lake in Prescott and let them hatch.

Gyrinidae are primarily surface swimmers. They often form large aggregations and when disturbed swim in erratic circles (name!) . they have horizontally divided eyes and corresponding brain areas are devoted to seeing above and below the water surface respectively.

Many true bugs lead aquatic lives, and all states of their life-cycle are water-bound, even though the adults of most species are good fliers. All I can think of a predatory and administer venom and digestive juices through their pointed 'beaks', some have raptorial arms, most have legs that are adapted to swimming and diving.

Water boatmen were in the news some time ago. A species in Great Britain was found to be the loudest animal on the planet, relative to its body size. It can create mating calls as loud as 99.2 decibels. The male water boatman produces this noise by rubbing his penis (or “genitalia appendage”) against the ridged surface of his abdomen.


Water Striders, Gerridae skate, using the surface tension of the water as their only support. They are predators and use their tactile sense to locate drowning, struggling insects that cause characteristic wave patterns. Getting close to the source, they switch to chemical prey recognition. A long time study subject of sensory and electro physiologists.

This photo, borrowed from Historic Rivers Chapter, shows the bug breathing through a snorkel  at its hind-end. So thisis NOT  a stinger! Instead the bug catches prey with its raptorial arms and injects venom and digestive juices through its 'beak'

While beetles and true bugs are good fliers and can easily find new ponds and meet mates during their nightly excursions they spend most of their adult live ponds and streams.
Other insects that spread more delicate wings once they have outgrown their aquatic larval phase, do not return to the water as adults, except to deposit their eggs.
This great photo of Odonata (Dragonflies and Damselflies) was taken in New Mexico, but all three species can be found in Arizona as well.

Mayflies (Ephemeroptera) spend the longer part of their lives as aquatic larvae. Note the external gills along the abdomen. Mayflies are famous for the mass emergence of the short-lived adults. Unlike most insects, Mayflies go through a winged subadult state that is followed by one final molt to the imago.


Even some Lepidoptera have aquatic larvae:  During the day these little crambid moths can be found sleeping in the vegetation close to creeks and streams. They are night active and come to lights in late summer to fall..
Adult females enter the water to oviposit, carrying a plastron-like layer of air as a source of oxygen
The larvae are aquatic, living within a silken web in fast-flowing streams;
they scrape diatoms and other algae from rocks in streams. 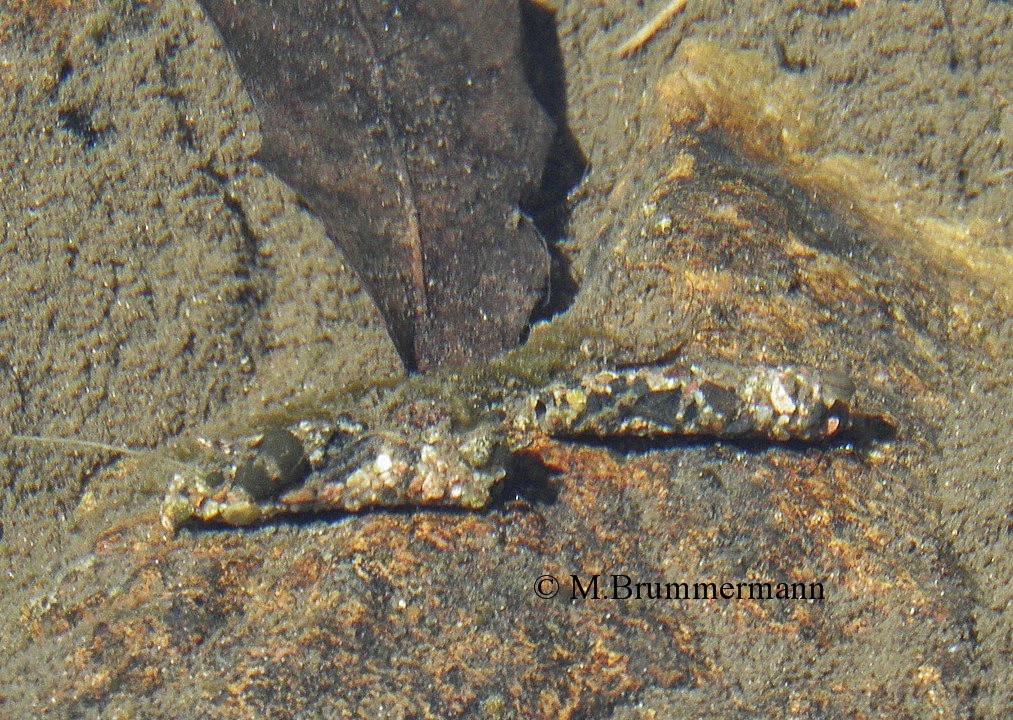 Trichoptera or Caddisflies,, those hairy cousins of the scaly Lepidoptera, are obligatory aquatic breeders. Their larvae build tubes out of detritus and anker themselves on the bottom of slow moving creeks.

This is a female Dobson Fly, about the size of a wooden cloth pin. The males have amazingly long mandibles. Order Megaloptera: The female lays thousands of eggs in a single mass, placing them on vegetation overhanging water. Megaloptera undergo the most rudimentary form of complete metamorphosis among the insects. There are fewer differences between the larval and adult forms of Megaloptera than in any other order of holometabolous insects,  The aquatic larvae are carnivorous, possessing strong jaws that they use to capture other aquatic insects. They have large heads and elongated bodies. The abdomen bears a number of fine tactile filaments, which, in some species, may include gills. The final segment of the abdomen bears either a pair of prolegs, or a single, tail-like appendage. The larvae grow slowly, taking several years to reach the last larval stage. When they reach maturity, the larvae crawl out onto land to pupate in damp soil or under logs. The pupa is fully motile, with large mandibles that it can use to defend itself against predators. The short-lived adults emerge from the pupa to mate and oviposit - many species never feed as adults, living only a few days or hours.

These are just a few examples of the rich diversity that can be found even in Arizona's creeks and ponds. More than any other habitat, these ecosystems are delicate and threatened by pollution, grazing, mining and continuous droughts.
Posted by Margarethe Brummermann at 5:48 PM