You may think that insects are not really good at it while many arachnids are better. But, as long as the offspring survives it’s probably just exactly the amount of care that’s necessary. In many cases the short-lived parental generation is not around to see the eggs hatch anyway. So the care may all be in the careful placement of the eggs on exactly the right food plant or in the protective microclimate of a nest or at the best spot to hitch a ride with the best foster parents …. Or the care may involve tackling a scary giant as a host or a smelly pile of dung rolled into appetizing portions …

Some dung beetles are 'tumble bugs'. Using their shovel-shaped heads a pair cuts a round ball out of a fresh pile of dung. Then they roll their prize a considerable distance from its origin, bury it, and the female lays eggs inside it. In some species, the parents stay around to protect and feed the offspring while the larvae grow in their dung ball. Why don't the beetles just drop eggs into the fresh dung and leave? Some flies do it that way? That's just it: dung of big vertebrates still contains many nutrients in a very accessible form, so the competition is great. Beetles, flies, worms, all claim their share. Large dung beetles develop more slowly than many smaller competitors. Also, dung attracts predators. So these parents grab there share and then set up house as far away from the source as possible.

Many wood-boring insects have to deal with the trees self-defense mechanisms. If the larvae are feeding in living parts of the tree they are likely to be gummed up by an avalanche of sticky tree sap. That is the reason why bark beetles are so dangerous during droughts: the tree does not have enough sap to spare to fight back.
In Arizona, we have several longhorn beetles whose larvae grow up in twigs. They are rather host specific, so one uses oaks, another species specializes on mesquite and close relatives.  To guarantee the safety of the larvae, the female chews a grove around the twig, all the way through the cambium to interrupt sugar and water transporting vessels. Often a big glob of accumulated sap can be seen on the tree-side of the cut. But the apical part of the twig is now wilting and dying and defenseless.  That's where the beetle is placing her eggs and where the larvae will grow up. Several other species of insects that are usually drawn to freshly dead wood also find those dying branches. So if you collect those dead branches in a raising box you will usually find a number of different insects emerging.

Freshly dead wood is at a premium for the larvae of wood-boring beetles. Adults of a number of species can be found at wood cuttings or wind breaks where they mate and deposit their eggs. A special situation are trees killed by forest fires.   Buprestids in the genus Melanophila  have pits on the mesosternum that actually detect fires. The females are so drawn to this wood that they may come too close to the fire and burn off their tarsi (feet) while ovipositing.

Many true bugs stay with their brood and take care of them.. I still remember hearing recordings of acoustic communication between stink bug mothers and their offspring at the University of Ljubljana when I visited the physiology department there in 1981. It was a squeaking sound that she seemed to  generate by stridulating her proboscis in its grove. The kids were quite obedient, they dispersed at one signal and clustered under mom at another. My photo shows a bug from a different family, a Flat Bug (Aradidae) with very young nymphs and eggs 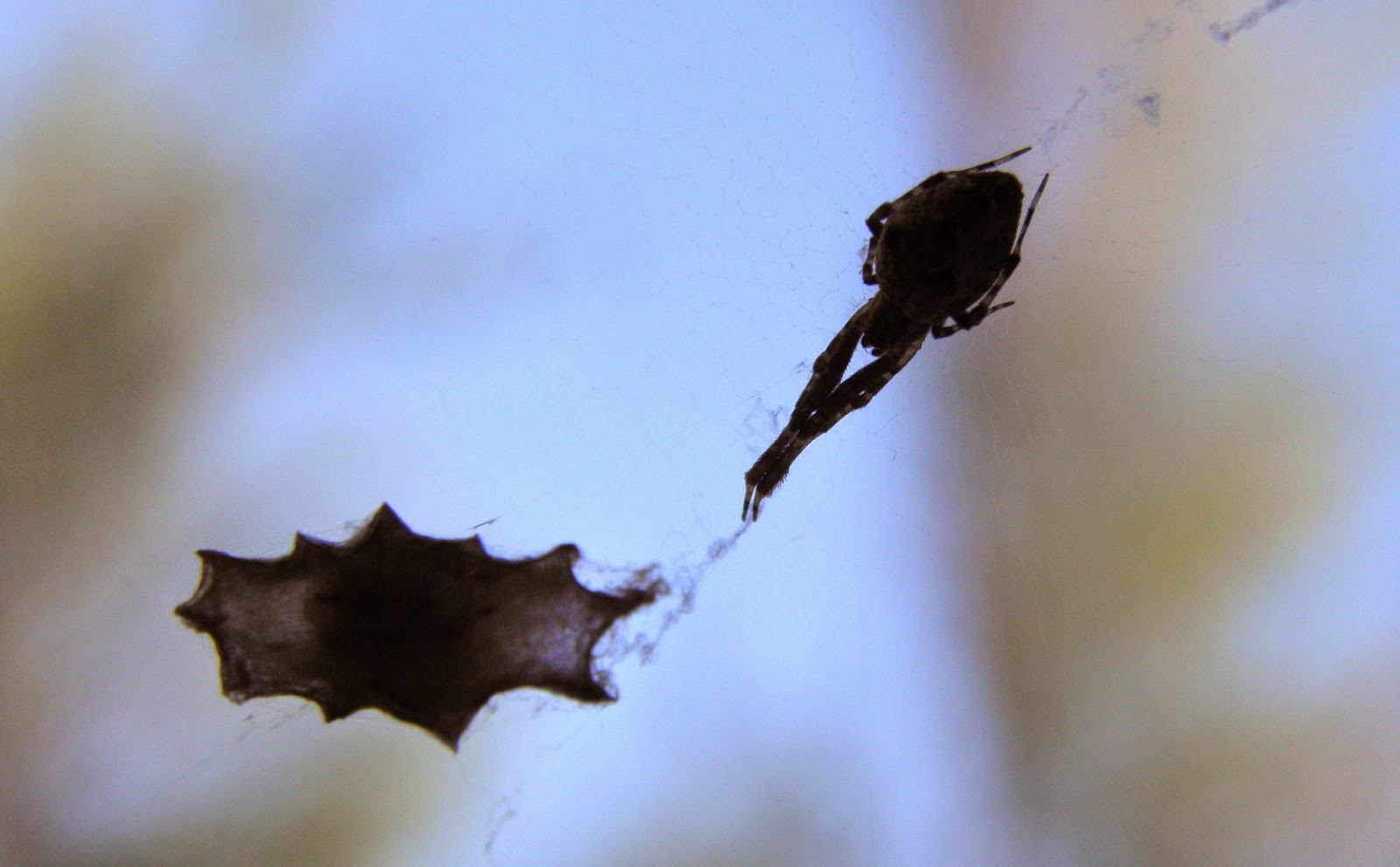 Our Uloborus spiders live indoors with us. They are pretty safe from most predators and, I must admit, from my dusting as well. But they multiply! They build starshaped eggsacks that hang in their cribellate webs until they suddenly burst into fluffy cotton balls, releasing dozens of miniature spiders. Mom allows them to live in her web for a while and then they build their own ones close to hers. So eventually I will have to oust them ..

Spiders often guard eggs and hatchlings in their webs. But few wolf spiders have webs to call home and they need to get around to hunt. These ambulant species have a characteristic way of lugging their egg-sack around under their abdomen. When the young hatch they climb on mom's back for a wile. I would love to see the mother catch prey. I assume the kids get to eat then, too.
By the way, wolf spiders have a good reason to be vigilant. Wasp Mantisflies are waiting to get their own eggs into that egg-sac ... 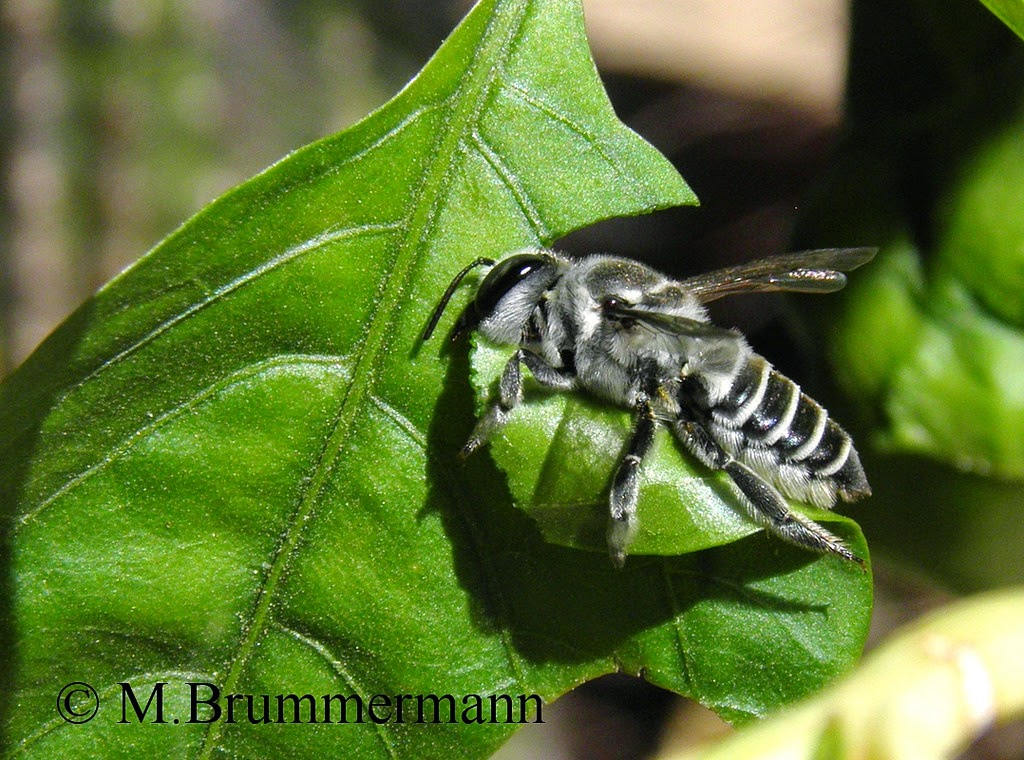 Brood parasites wait for every tasty clutch of eggs and even more so for eggs that come provisioned with food. So many eggs are deposited deep within nests which are hidden and sealed. Here a Leafcutter Bee is choosing the wall paper for her nursery. Her nest is in a pre-existing hole, maybe a hole from which a wood-boring beetle has hatched. She covers the walls with her circular cut-outs and she uses them to separate the tunnel into several cells. Each will hold provisions (pollen) and an egg. Males develop faster, so those eggs are placed closer to the exit than those that will become females. Leaves may provide moisture and insulation, but most importantly they have some antifungal and antiseptic qualities that may protect the pollen and the egg.

More sophisticated than most other care systems is that of the social hymenoptera. A queen (or several) starts the nest in spring. After she's raised a few new workers, she's got help and can concentrate on her main role: to lay more eggs. The larvae will be tended by the workers, who are their sisters. These females need not reproduce themselves because they share at least as many genes with these larvae as they would with their own offspring.
In Arizona I have always seen dark brown Polistes major castaneicolor. But in early spring I found some solitary wasps that I could not fit into any of our Polistes species. Now I see one of them on each of the new nests, in this case accompanied by 2 of the 'castanaeicolor' individuals. I'm guessing that those are the first daughters of the young queen and hatched from the two cells in the center that contain no eggs. New cells are added on the periphery, so those are younger. You can see the eggs inside. If only the overwintered queen is banded in yellow and rust, it's no wonder that I thought that ALL P. major castaneicolor are brown.

Posted by Margarethe Brummermann at 5:40 PM