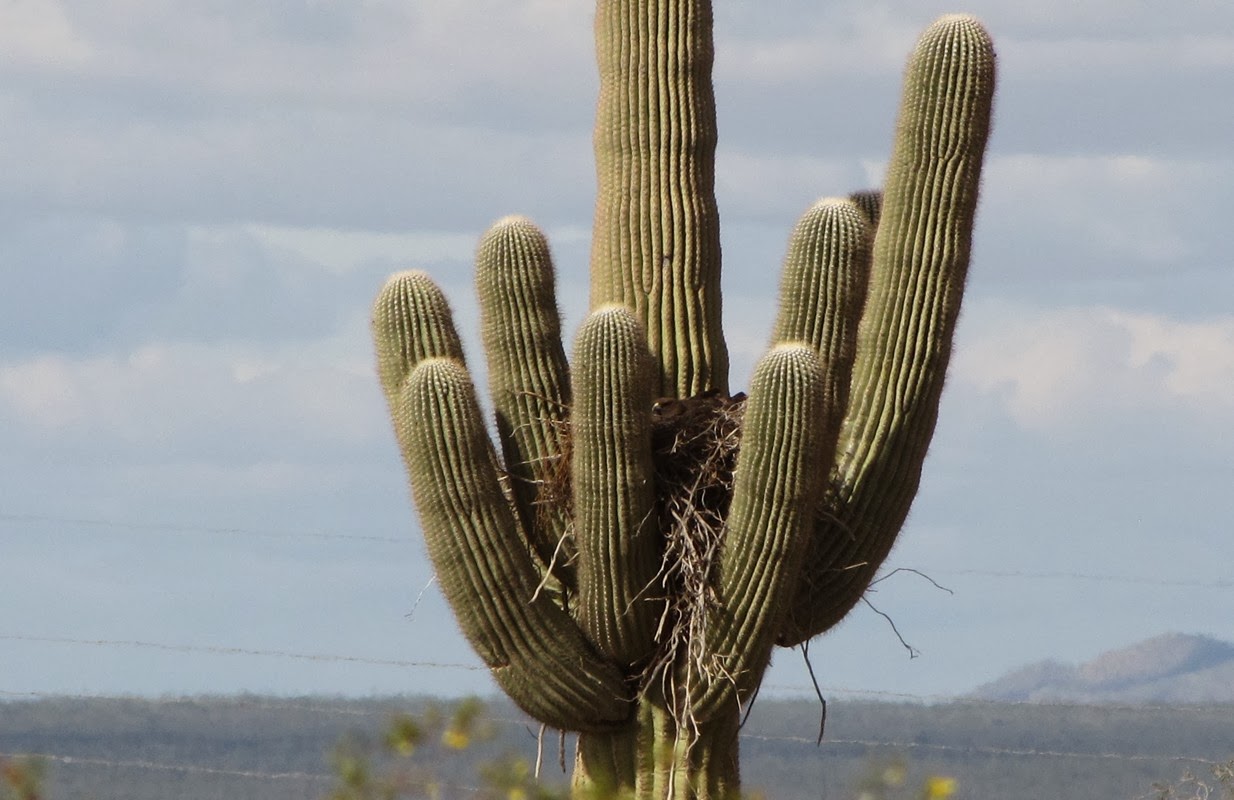 She's back! The dark-morph Red Tail Hawk  is on her old nest again. I introduced in this blog in 2011 Every year since then she  successfully raised a brood in one of two saguaro nests in the state trust land next to our property. Usually she alternates between the nests. But in January 2014 I found some green boughs of creosote and mistletoe hanging from the nest she used in 2013, indicating activity. I also watched the distinctive dark hawk defend her territory against a visiting Harris Hawk. But that chase took her way south into Picture Rocks, miles from the old location, so I thought she might have moved? Three weeks ago, a very light hawk took off from the saguaro nest. Now I think that that was her mate, so they were already incubating. Hawks start that process after the first egg is laid, while some other birds, especially our Gamble's Quail in the chicken family, wait until the clutch is complete before the female sits down to incubate. Two different strategies: raptor chick hatch in sequence. That spreads the risk and allows the parents in bad times to concentrate on raising only the bigger first born(s). The precocious quail babies all have to be ready to leave the nest together, so they need to hatch simultaneously. 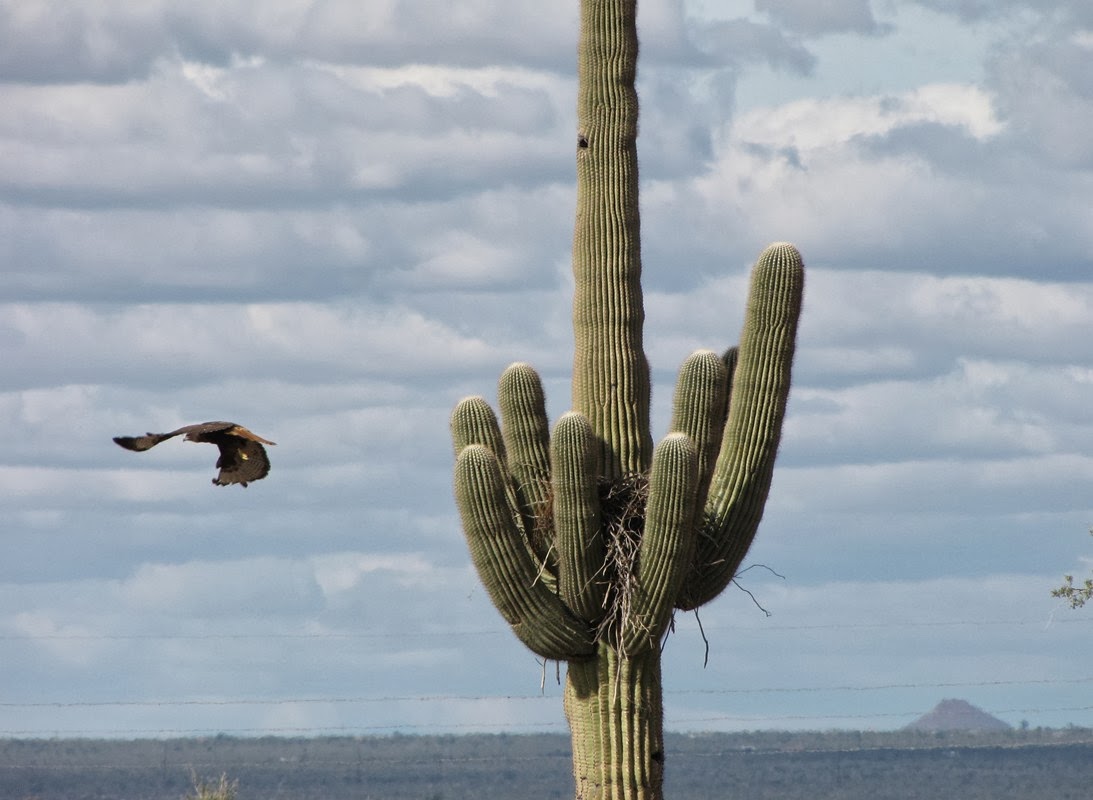 Raptors should not be disturbed when they sit on eggs because they may leave them. They are much more devoted to the hatched chicks and not as easily discouraged at that later time. So we waited until today with our next visit.
We stayed so far away that even with binoculars  I couldn't tell whether there was a bird on the nest. I took some photos anyway and could then see in the blown up image that it is the dark female again! But even though I was at least 500 meters from the nest and in the cover of a wash she still took offense and flew up. But she did not leave the area. 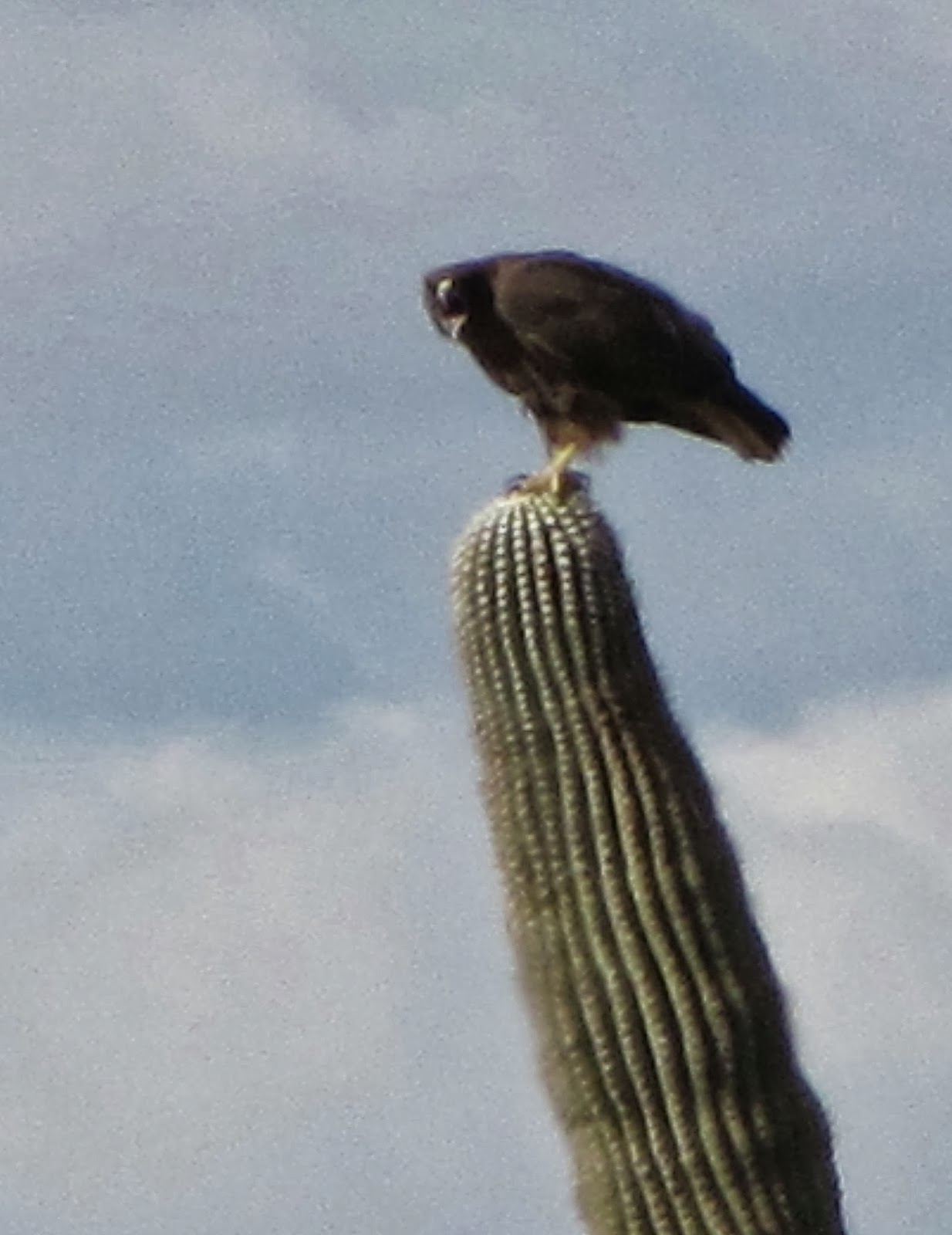 Landing on a near by saguaro she scolded and screamed and then took to the air to follow my retreat closely, and Randy thought he saw the male high above in the sky. I did not get to peak at the nestlings. The dark female has always been extremely protective, and she really doesn't like human visitors. So no wonder that her nest is nearly exactly in the middle between the road, the quarry, and our land, as far as possible from each location. We will leave her alone again, most of the time. I wish her success and another pair of healthy chicks! 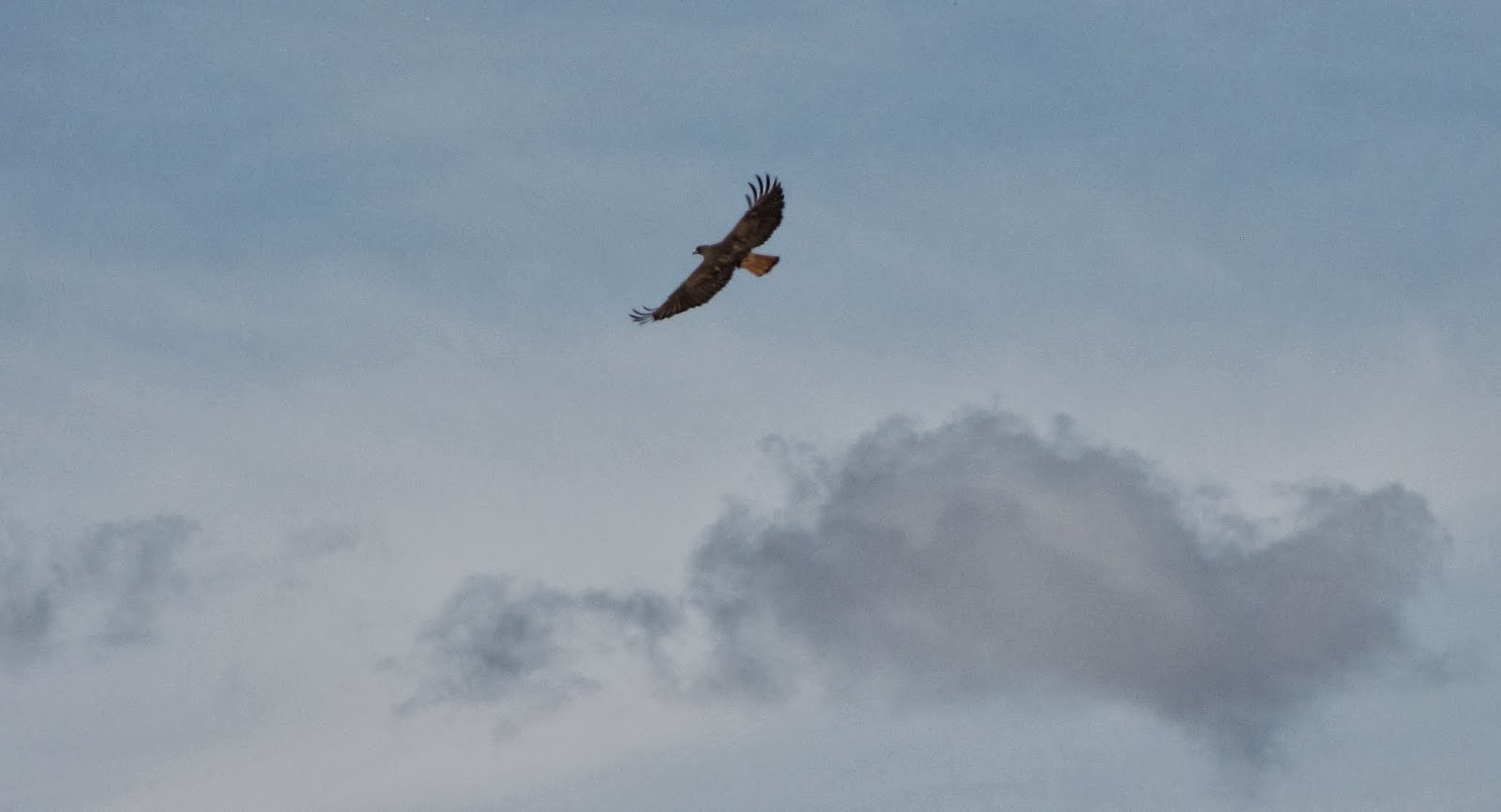 On March 27th for the first time both hawks were in the air. The male is light with a dark head. They flew over to scream at us but then returned to  hunting over the Twin Peak. Nestlings were still not visible, but at least one was chirping loudly. 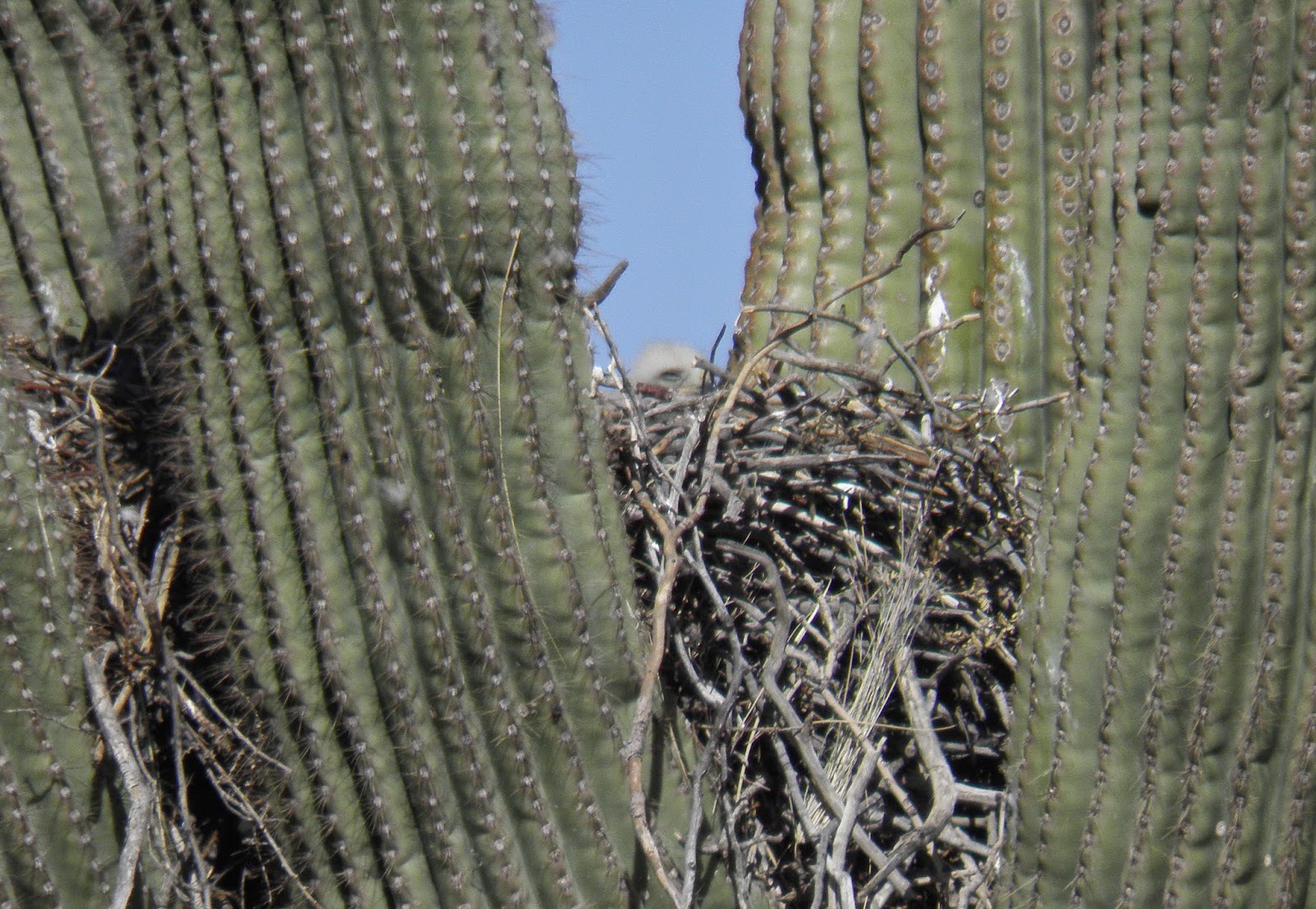 April 3, fist peak at a chick. He was already busy rearranging twigs of the nest. Looking healthy. From the whitewash under the nest, I'd say there are at least 2 chicks. But who knows.

We also watched a shrike scaring a pair of Gnat Catchers, White-throated Swifts harassing the male Red Tail, and found that our rodeo-riding neighbor brought new cattle to the state land. 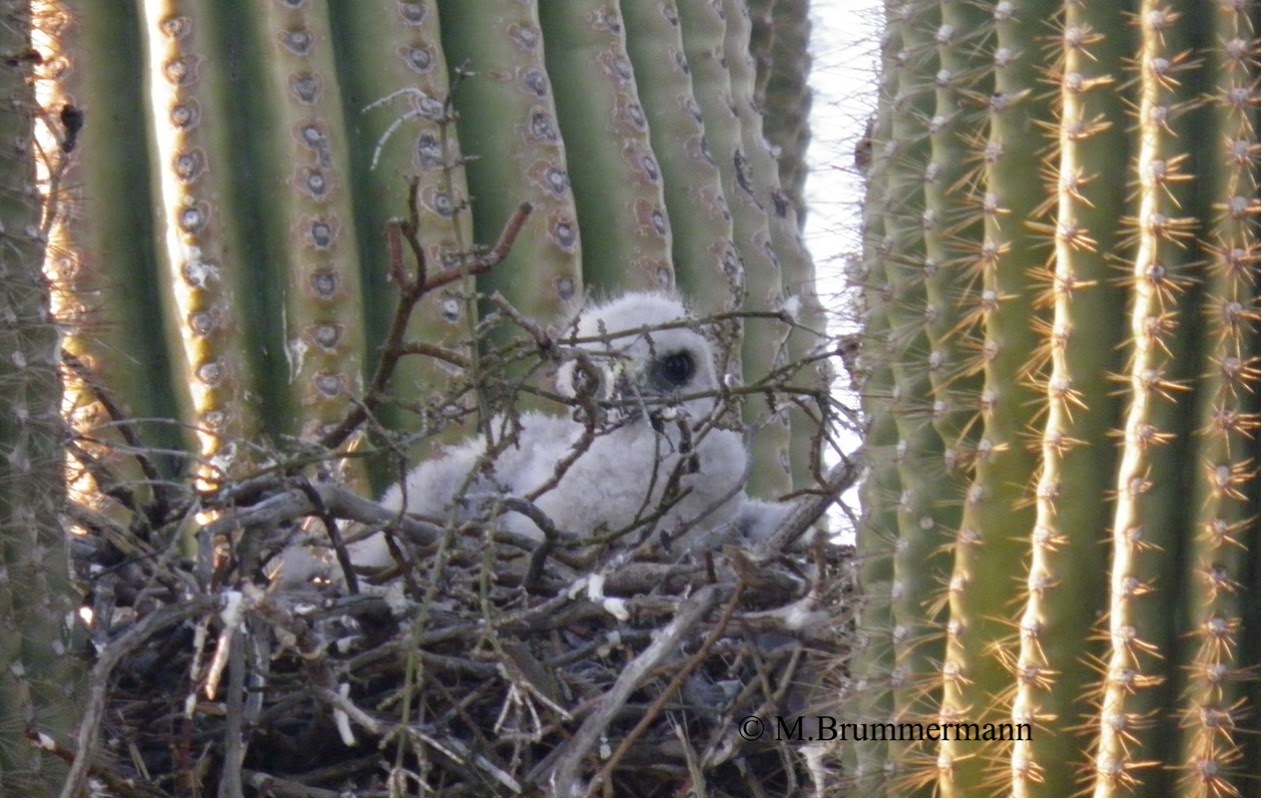 April 15, The chick is much bigger, but is he an only one? I can't tell, and mom is screaming madly at me, coming all the way from the Twin Peak to scold me. 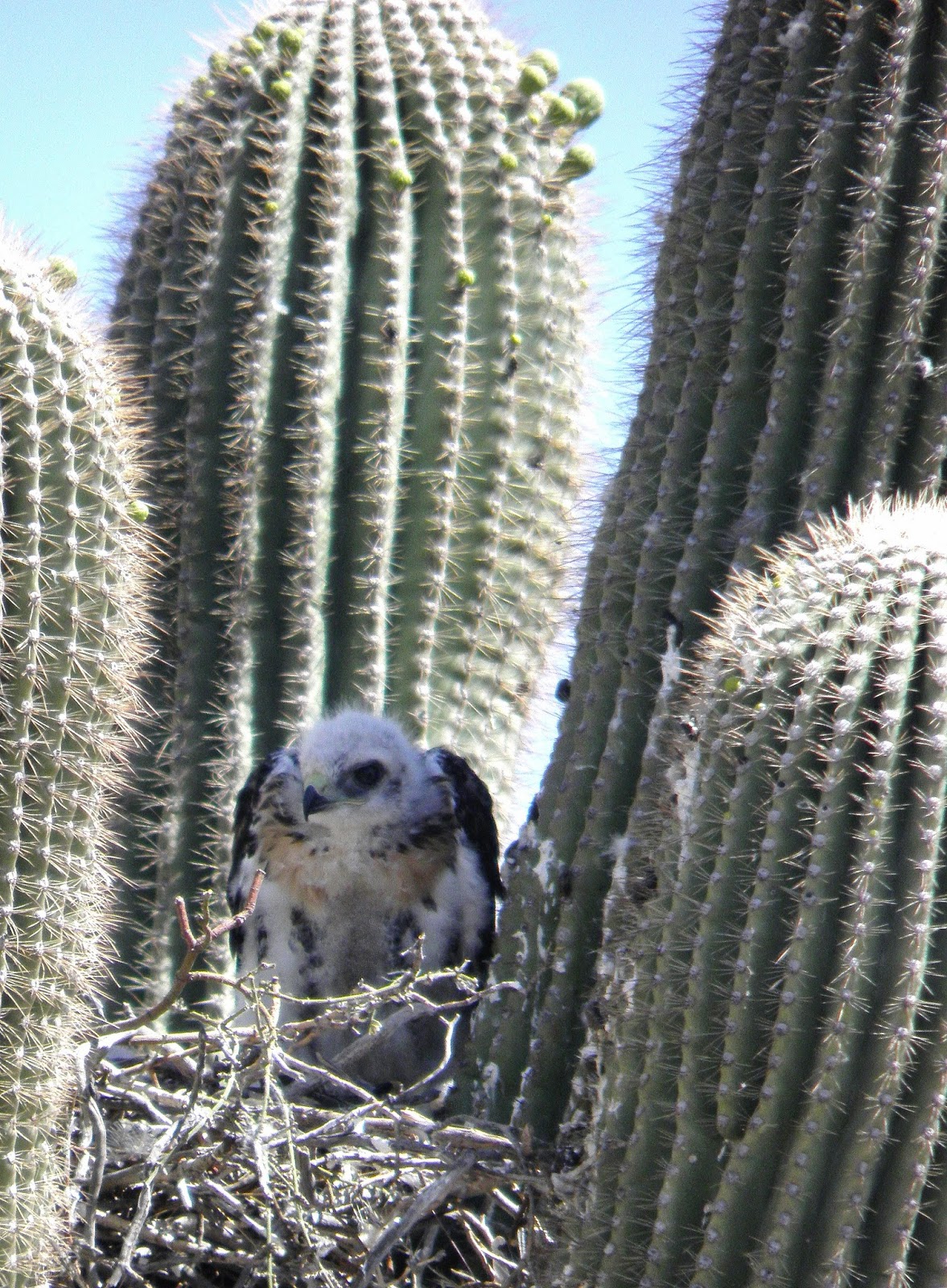 April 21, The contour feathers are there. I still haven't seen more than one chick, but our friend Frank stayed a little longer and got rewarded with a peak at a second chick. 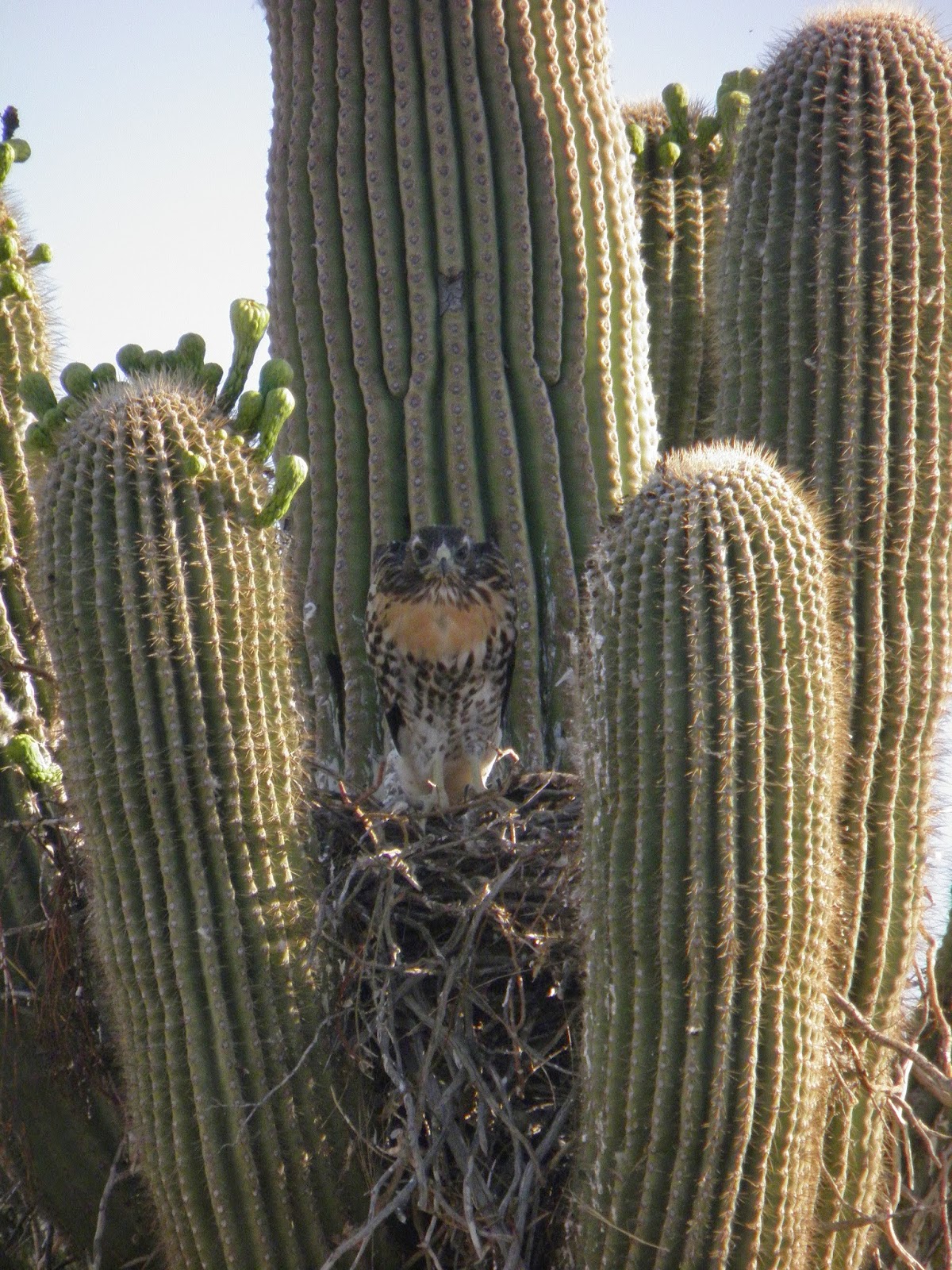 5/6/2014 Saguaro blossoms sprouting around the nest and the chicks are getting big. One is always staying low, but I have seen his head. Mom was agitated this morning and kept swooping up at eye level, then landing on a saguaro close by. Cactus flowers can support the weight of a hawk! 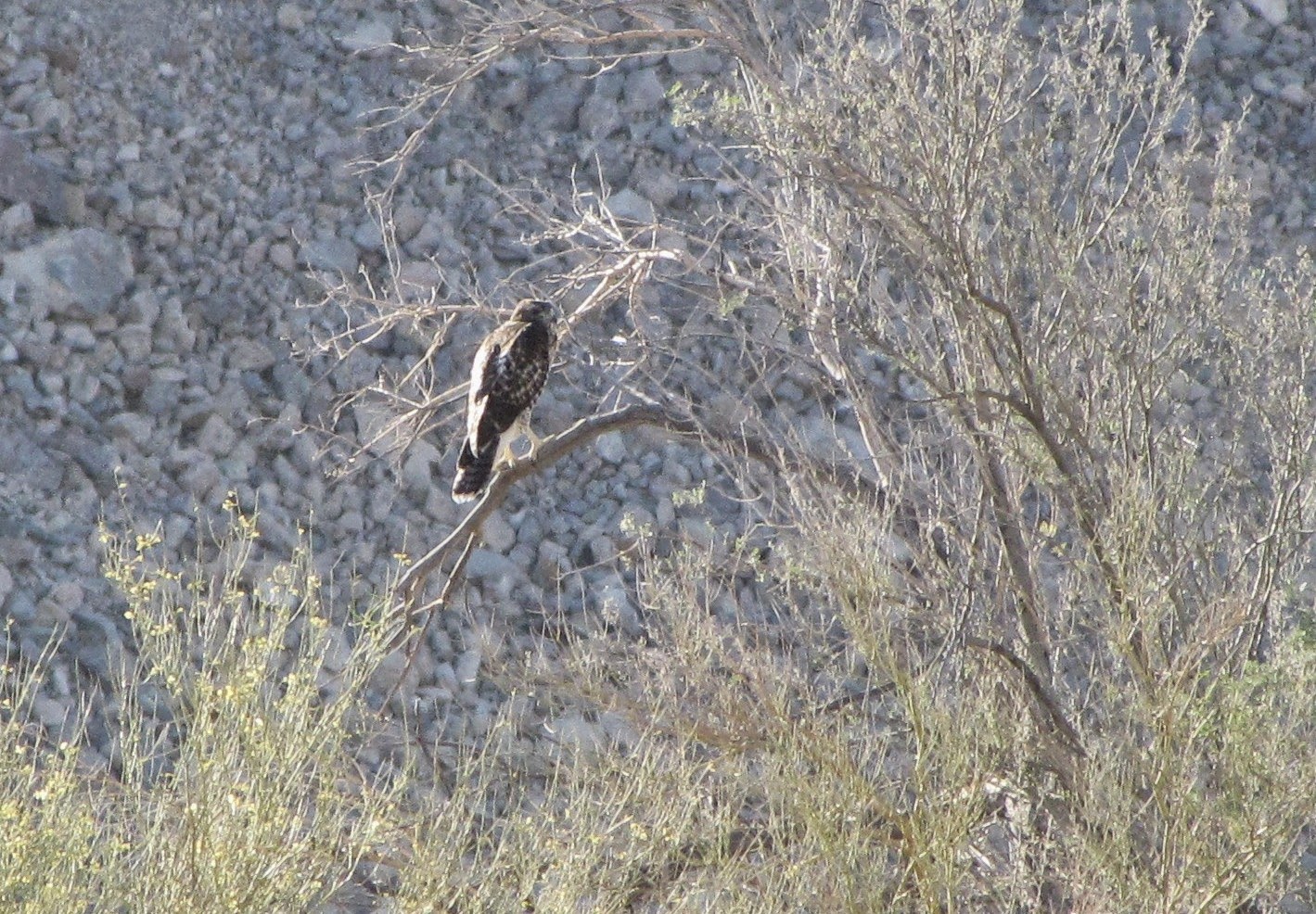 5/12/2014 The nest is empty and at least one chick is perched about a third of a mile east of the nest, closely guarded by his dark mother who is more protective than ever. Good luck! 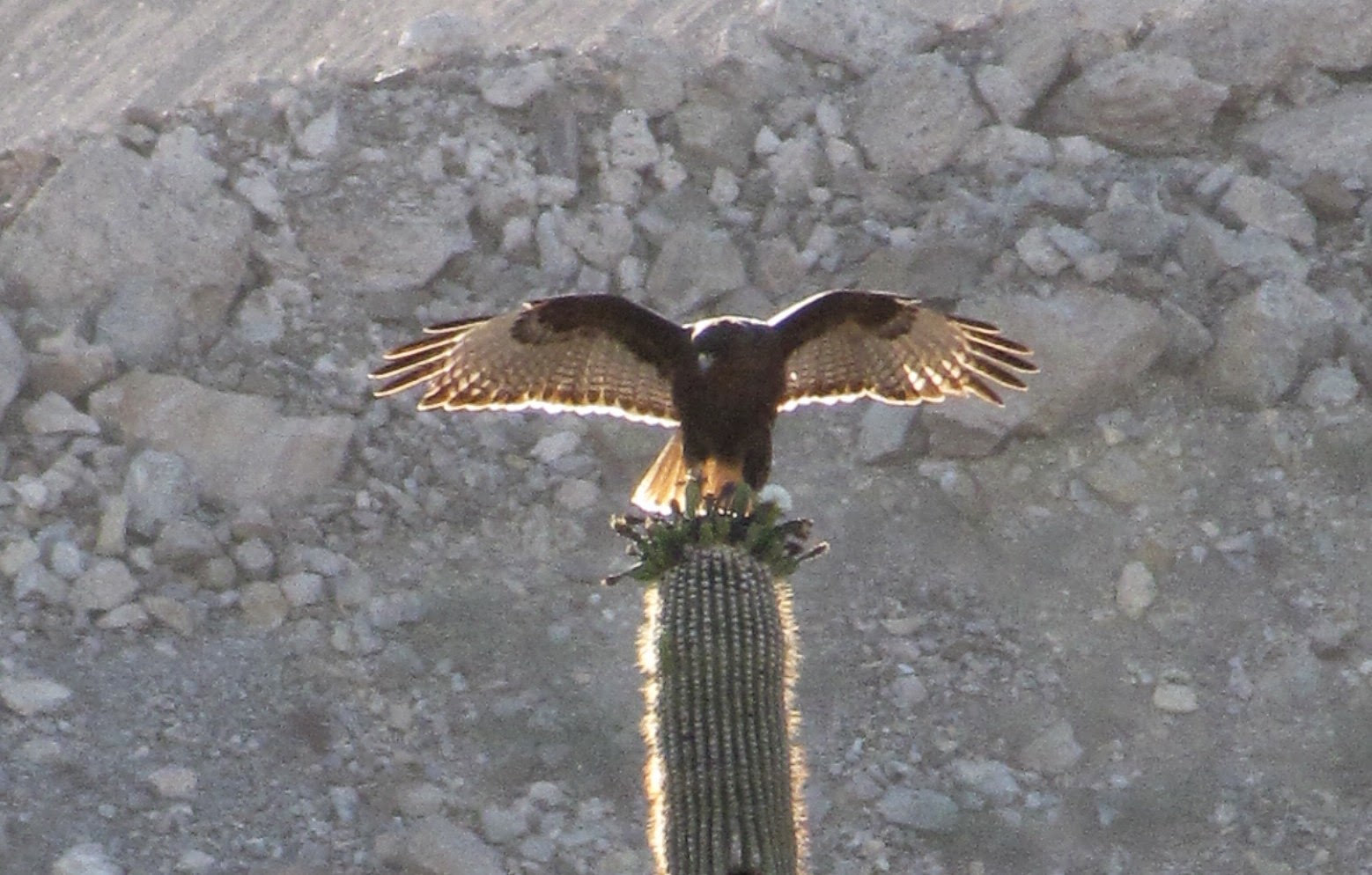 For more photos of this last visit to our hawks in 2014 click here! 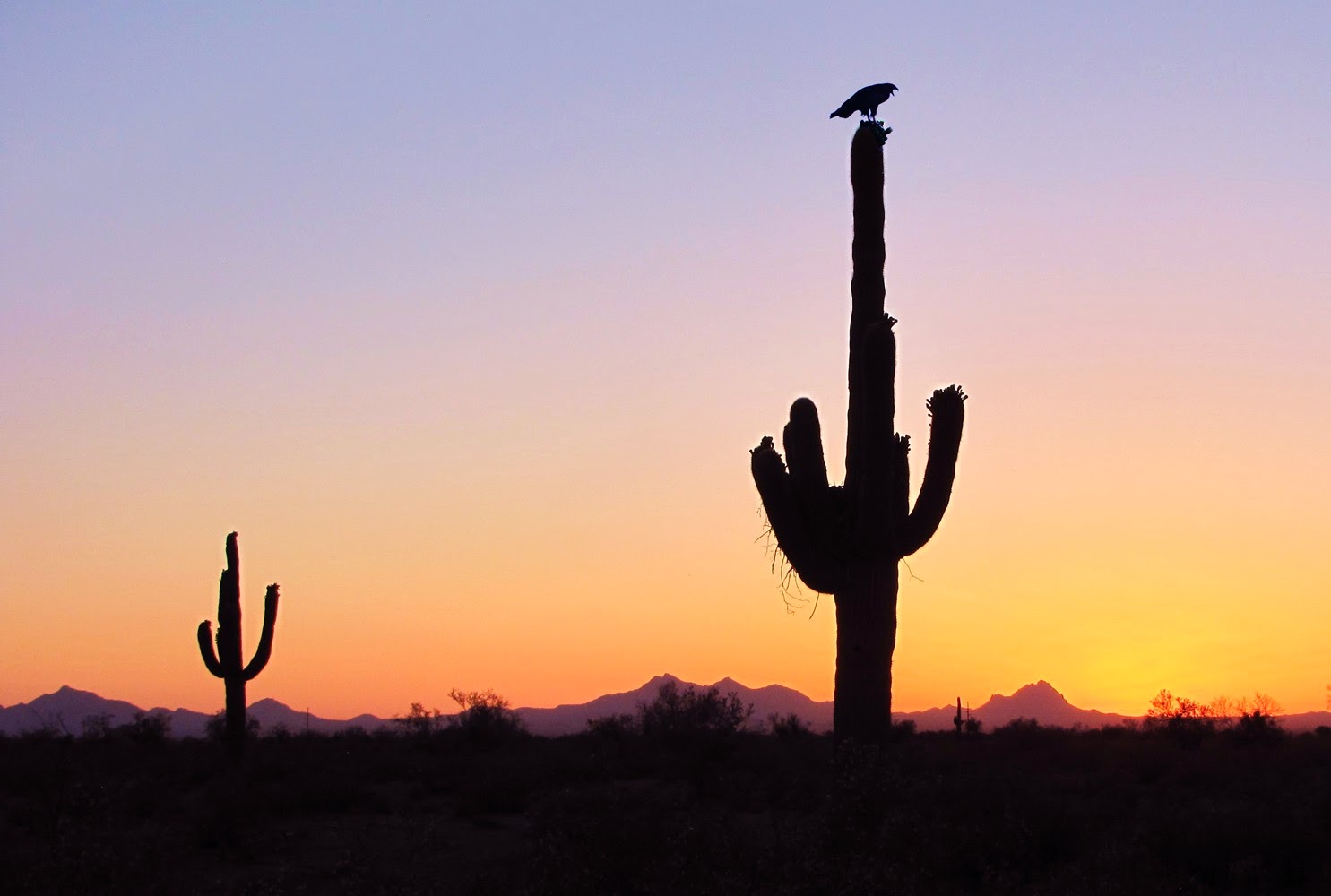 Cody and I walked over on 5/13/2014 for a last visit (two years ago a pair of youngsters kept coming back to sleep in or close to the nest). But the nest (in the right saguaro) was empty. Mom still felt she had to come over and scold us, either out of habit or because the youngsters were hidden close by.
Posted by Margarethe Brummermann at 8:20 PM