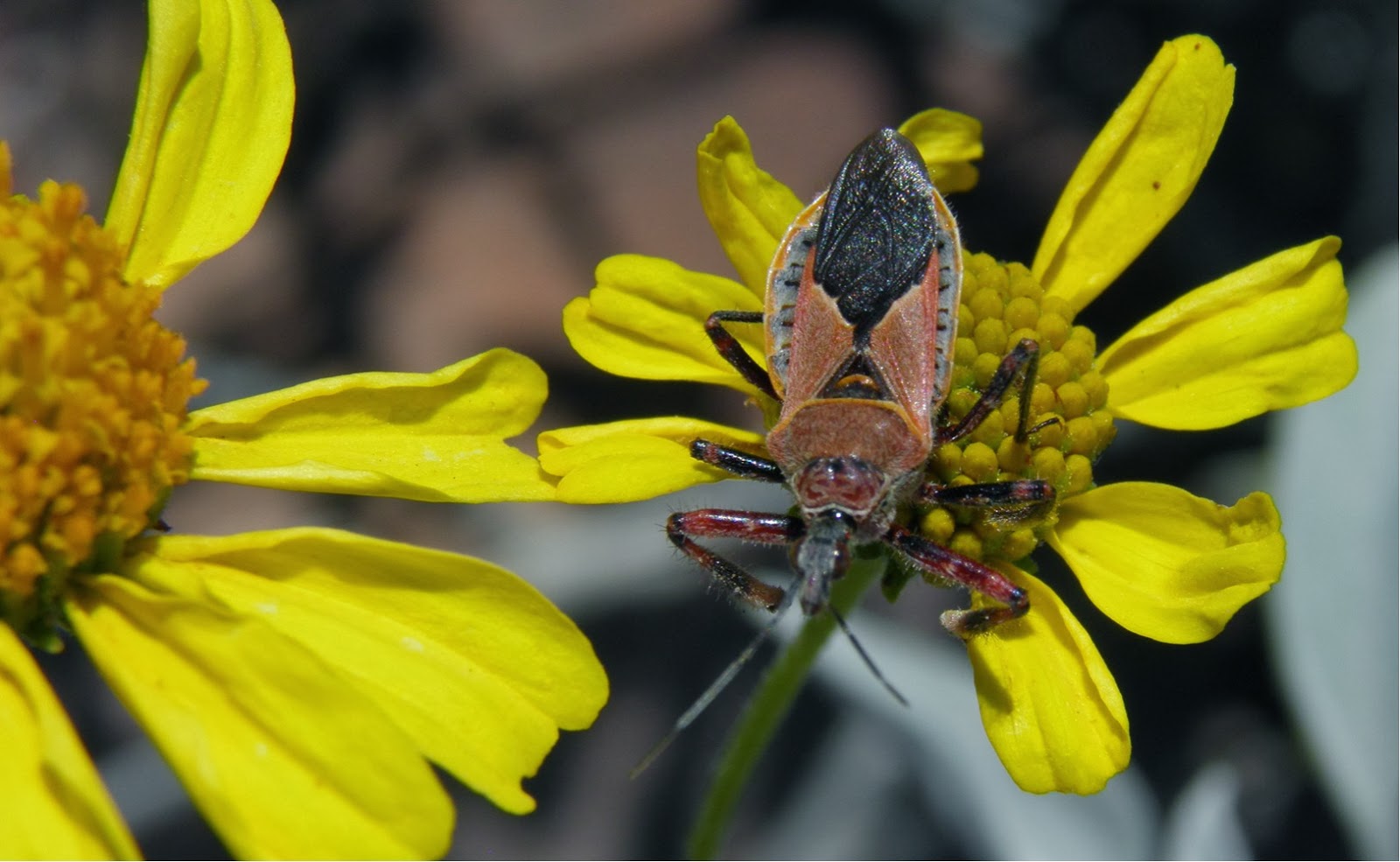 Today I went out to photograph some small bee assassins. I find this species every in Saguaro National Park West when the Brittle Bush blooms. When I came home I looked up what had happened to the species name of this insect since I had first seen it in 2008. It was a somewhat convoluted story:
In April 2007 J. Dockens posted her observation of a small Apiomerus from the Boyce Thompson Arboretum in Superior, Arizona, on BugGuide, and Eric Eaton identified it as Apiomeris cazieri.
A year later our most active Assassin Bug expert D.R. Swanson commented 'This has actually been bugging me (no pun intended) for awhile. There is no mention of Apiomerus cazieri in Henry and Froeschner's catalog (1988). I also have the revision of the genus by Costa Lima (1951) in front of me and there is no mention of A. cazieri there either. In fact, I cannot find a single literature record for this species. Now that doesn't mean there isn't one, of course, but it does have me curious and albeit it, a bit skeptical.' 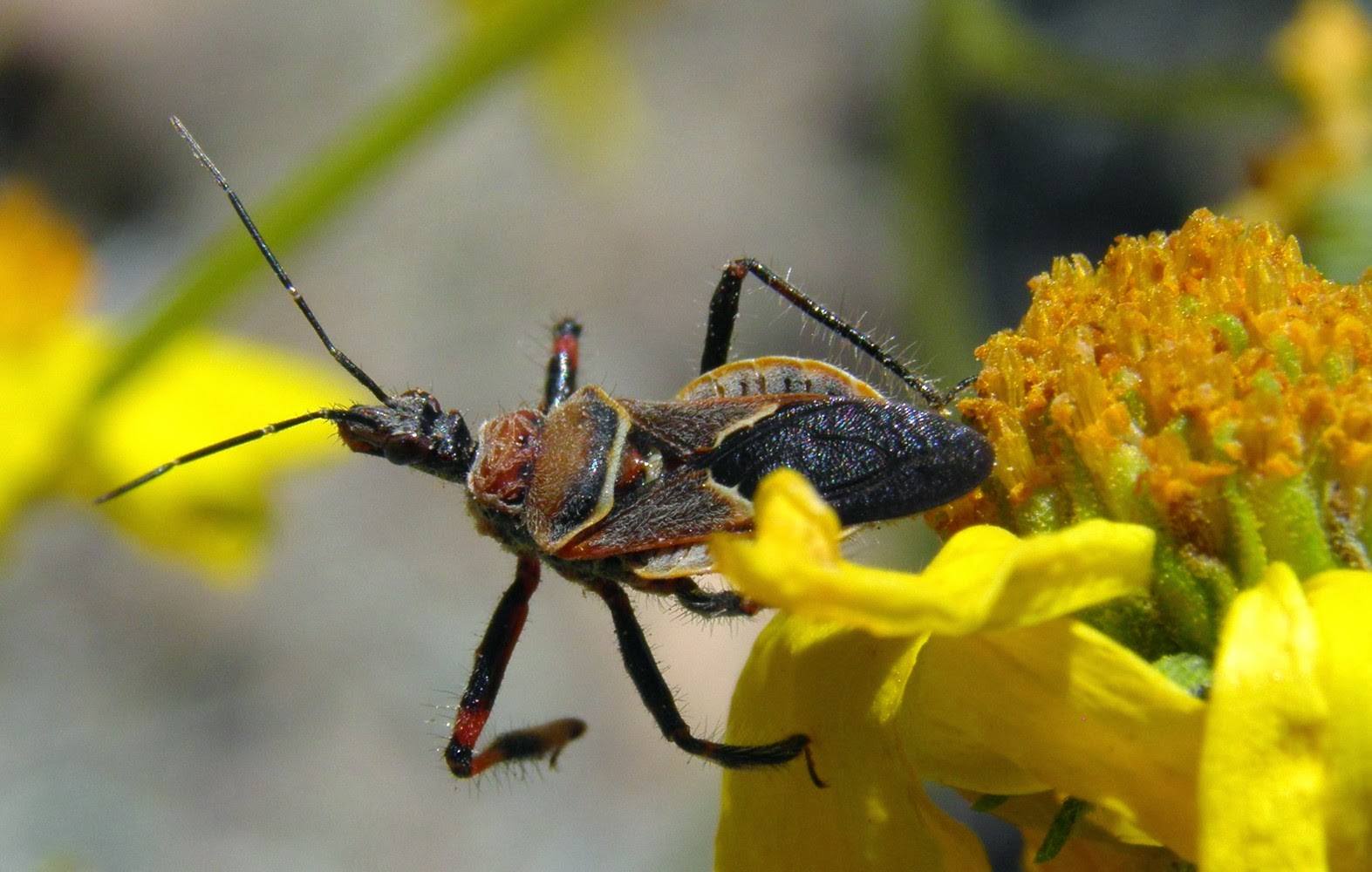 So how did this discrepancy come up and who was right at the time?
Eric Eaton, then living in Tucson, had access to the University of Arizona Insect Collection, and there in the reduviid drawers were several Arizona specimens of a small bee assassin clearly labeled Apiomerus cazieri. But Carl Olson, the collection manager, told me the strange of those labels:
The specimens had been part of the type series of  Leopold Szerlip's description of a new species for his doctoral dissertation. A Berkeley grad student at the time, Szerlip completed a biosystematic analysis of the Apiomerus of North and Central America in 1980 as the topic of his doctoral dissertation. Unfortunately other than qualifying him for his PhD, nothing more was done with the information; a paper was never published. As a result, the 19 new species erected within it were invalid. 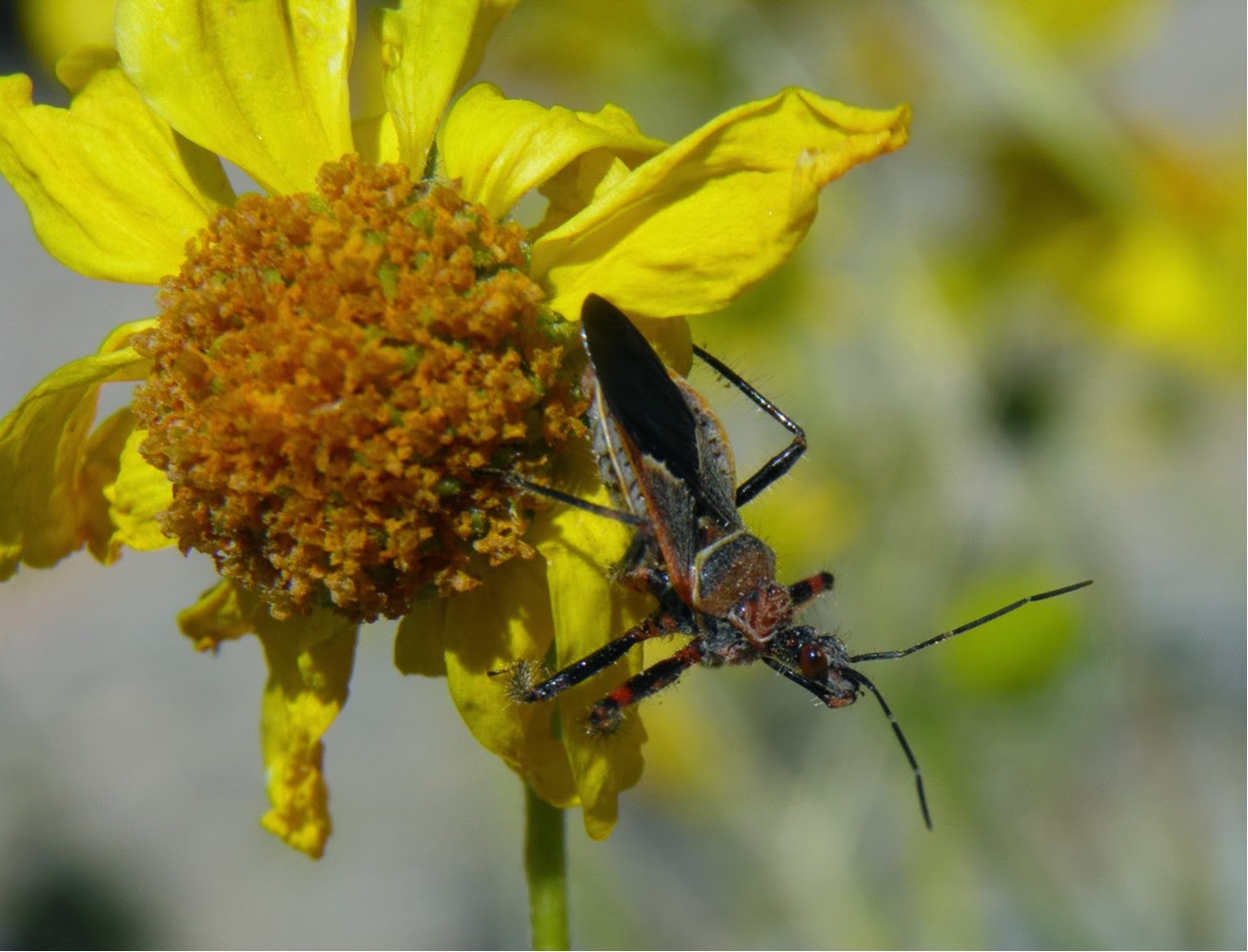 But at the same time, no other scientist felt comfortable to do any work on the group because of this existing manuscript. At BugGuide and at the U of A specimens kept coming up that were carefully designated as  Apiomerus crassipes species group (crassipes species group) with 'A. cazieri' added  in quotation marks. We all knew that 'A. cazieri' was a 'good' species, easily recognizable by its small size and the early spring appearance of the adults, but we also knew that the name was invalid. 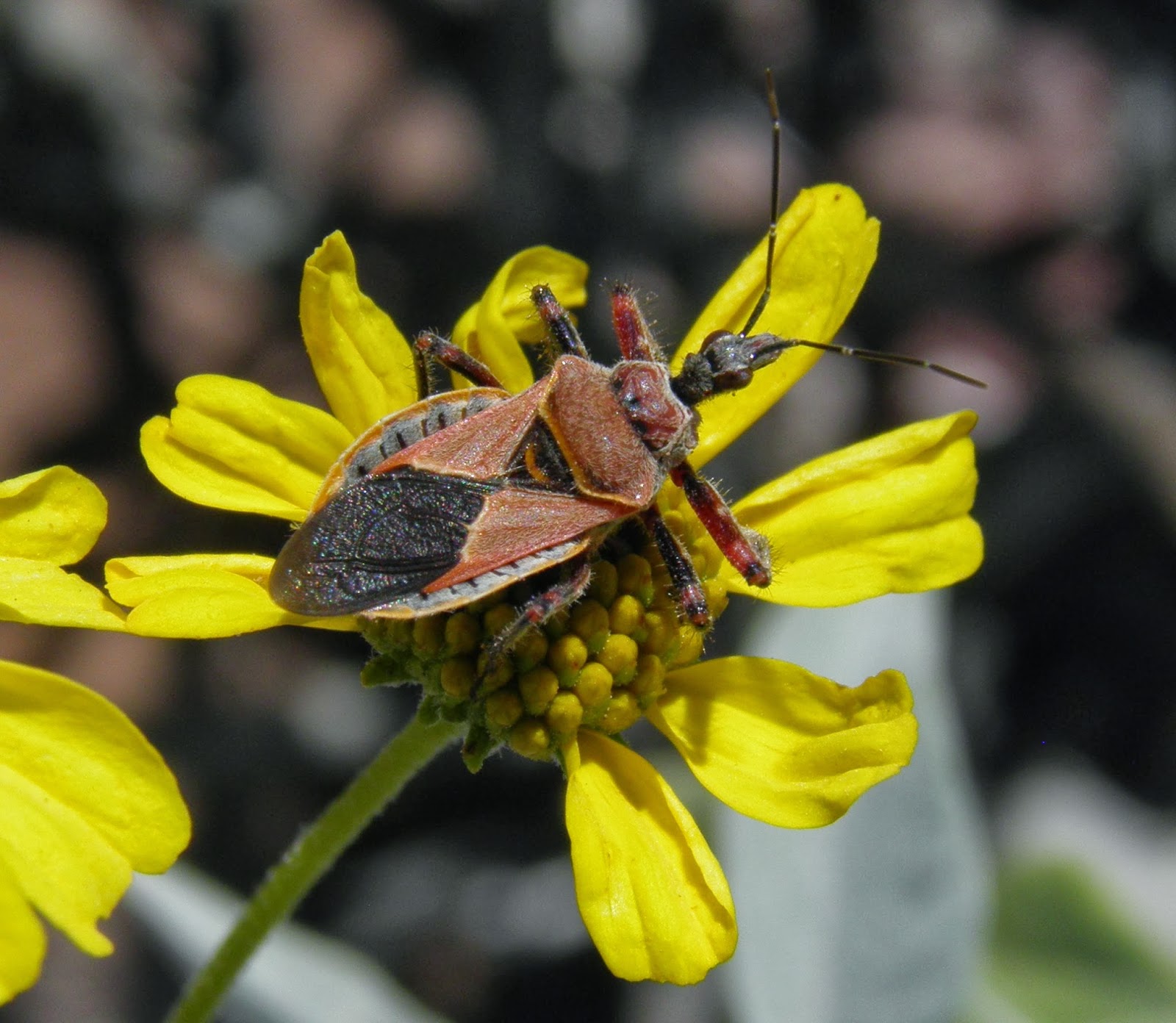 While we were still scratching our heads Ted C. MacRae got the ball rolling in 2009. He wrote:
'Dimitri Forero, a Postdoctoral Researcher in Christiane Weirauch's lab at University of California-Riverside, has just responded to my discussion about this situation on my website and informs me that it will be rectified soon. A Masters student in their lab is revising the species concepts of Szerlip and adding a phylogenetic analysis, while Dimitri is dealing with the rest of the fauna in Central and South America. Best of all, Szerlip will be a coauthor of the Masters student's work validating his names. I think this is a fantastic outcome - not only will Szerlip's names be published, but he will get the credit he deserves and benefit from a modern phylogenetic analysis. Soon, we will be able to say Apiomerus "floridensis" (and Apiomerus cazieri) without the quotation marks!' 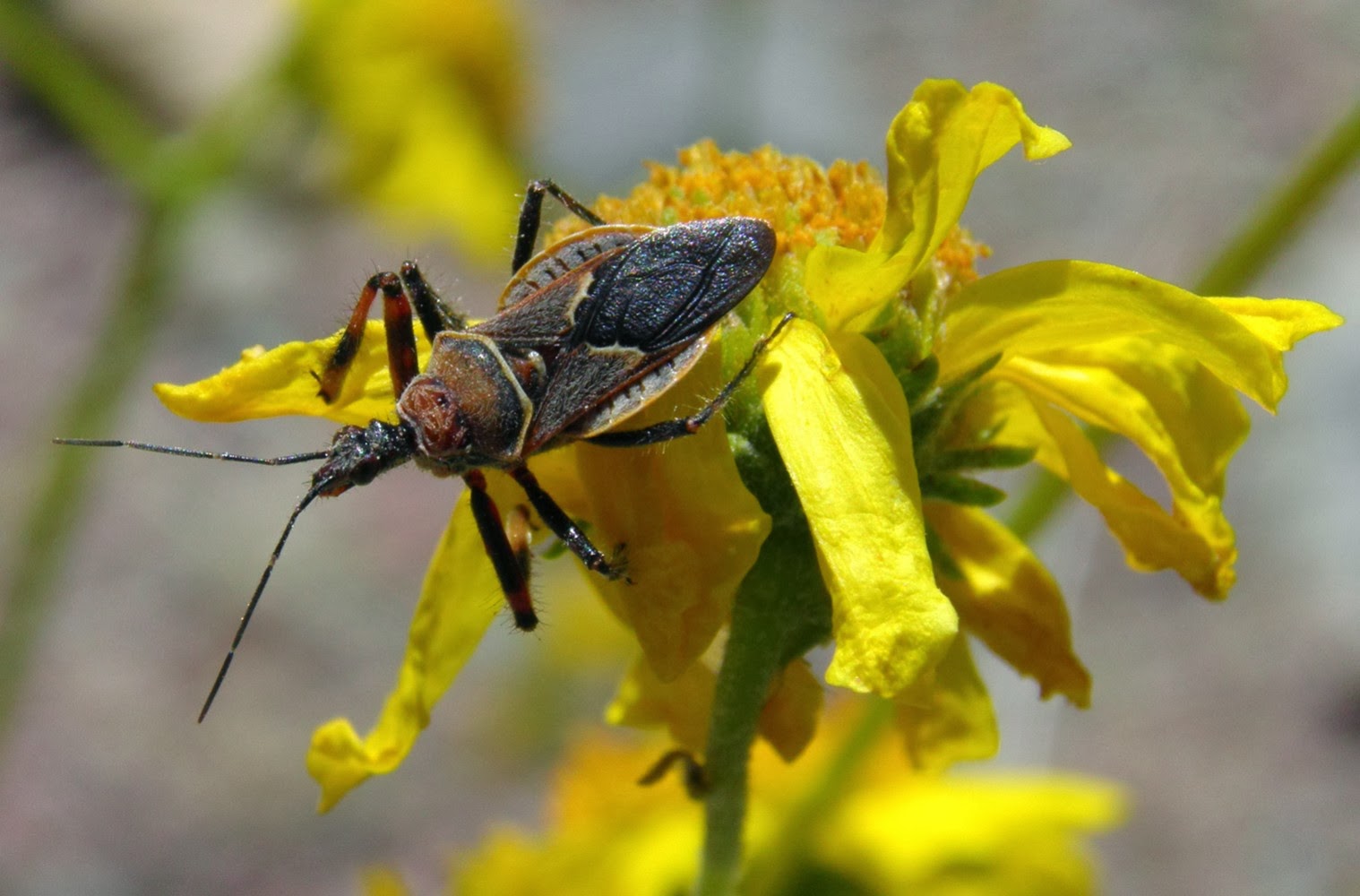 Anyone who is wondering how the validity of a species name is controlled and tested should turn to the code of the International Commission on Zoological Nomenclature (ICZN) and consult this scheme;  names from Szerlip's unpublished thesis would have been disqualified in the second line. 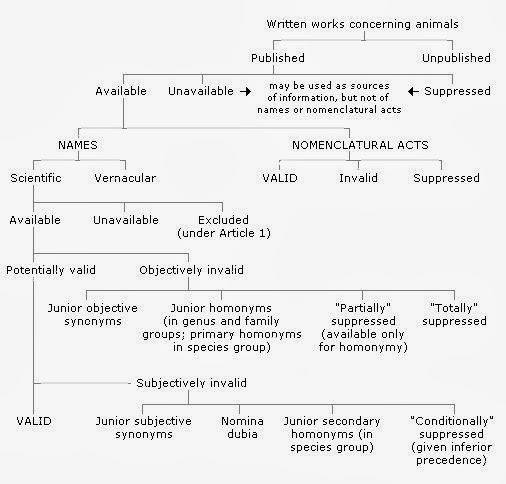 With this blog, I would like to make one point very strongly: When research is done at a public university it not only takes the work of the one researcher. It usually also takes resources from tax dollars, lab space, a position that others would love to have.... But beyond that, keeping the research community in limbo needlessly by not publishing is unethical in my opinion. I understand that there are lots of reasons for delays, and I do not know what exactly caused it in this particular case, but still....

But what really surprised me most in this case was that this little Apiomerus that is so distinctly different from others in the crassipes group had been overlooked for so long and was not described before 1980. Of course, I have the advantage of living right in the middle of its habitat, so I see some of them every year when the Brittle Bush blooms in Saguaro National Park West. The reason for the late discovery may have been that early spring is not one of the most interesting times for all those collectors who usually arrive for the monsoon bugs. So keep your eyes open, Arizona still has more to offer!
Posted by Margarethe Brummermann at 10:38 PM