This spring the author of several great books on caterpillars, David Wagner, visited us at the University of Arizona Insect Collection. Working out of the University of Connecticut, he had concentrated mostly on eastern species (Caterpillars of Eastern North America, Princeton University Press, 2005) but now he's progressed to the real thing, working on a guide to Arizona, or better southwestern caterpillars.

Inspired by him, I have been looking at caterpillars with renewed interest. Most specimens that I found were shipped as quickly as possible to Connecticut to (in)star in the new book. 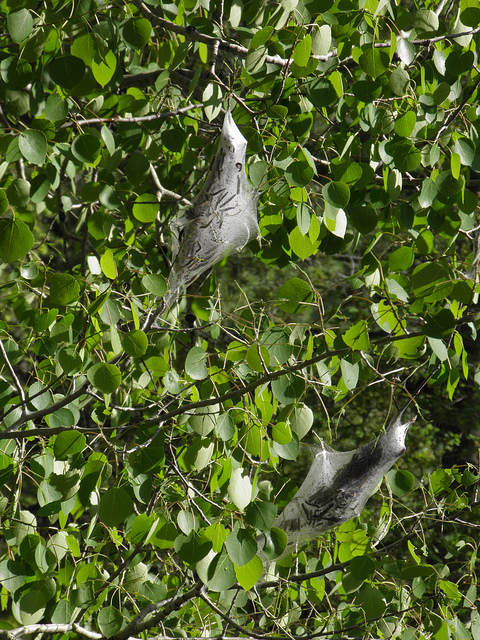 This year we had  an impressive outbreak of Tent-Caterpillars of the genus Malacosoma on Mount Lemmon in the Catalina Mts. One of my collecting trips in mid May was mostly devoted to these guys. 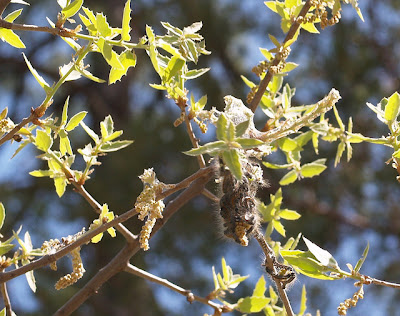 Of the oak feeders, I only found early instar caterpillars in very rudimentary nests, all the larger caterpillars were by themselves. I learned later that this solitary life style is typical for the species. 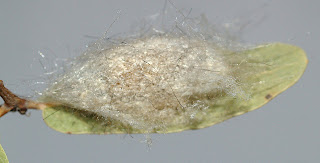 The oak feeders spin flocculent cocoons under and between oak leaves to pupate.

The caterpillars on Cherry, Aspen, and Willows at Marshall Gulch are probably M. californicum, the Western Tent Caterpillar.  The final word (from Dave Wagner) on these ids will come when the adult moths hatch. He confirmed it later.

The Western Tent Caterpillars on aspen, cherry and high-elevation willow spin communal nests between branches of their food plant. When they leave the nest to forage they seem to follow scouts and leaders, and around the nests I found silky threads marking their highways. After feeding, the caterpillars return to the safety  (and warmth) of their nest to digest their food. The protection of these communal nests is profound. In Greece I once tried to open an empty nest of the related Procession Spinner. The urticating hairs left in the old nest caused my hands to blister so badly that it nearly spoiled the whole trip. 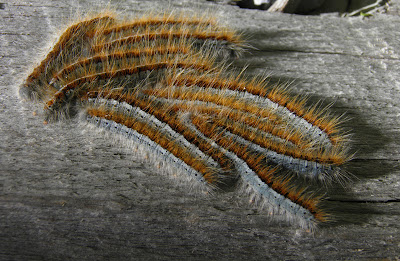 On Mt Lemmon I also found big gatherings of the aspen feeders resting out in the open on tree trunks and fence posts. 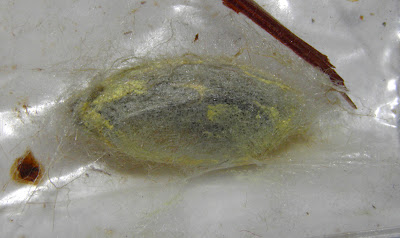 One of the caterpillars spun its cocoon on the way home from the mountain - anchoring it to a plastic bag instead of leaves of the food plant.  Note the infusion with a yellowish powder, typical for some Malacosoma species.


Although several of my Malacosoma caterpillars eventually  wove their silky cocoons and pupated inside, I have not yet seen any adult moths. Instead, I soon found a big hole in each cocoon, and next to it a smaller pupa in the barrel shape characteristic for a dipteran (fly) cocoon. Over the last few days several adult Tachinid Flies of different genera, but no adult moths, eclosed.  I hope David has more luck with the caterpillars I sent him. Parasitism of caterpillars is common. As a child in Germany I wanted to raise our beautiful Peacock Butterfly, Inachis io. Instead I got a whole row of little wasp cocoons (Ichneumonid) attached to an empty,  hollowed out caterpillar skin.. The experience shocked me so much that I didn't try to raise any more caterpillars until I had to do it in a developmental physiology course during my biology studies. We worked with wax moths and repeated Kopec's ligation experiments - so again, I was deprived of any inspiringly beautiful results.

But - the limited success of this generation of tent caterpillars will probably save some aspen trees on Mt Lemmon from death by defoliation next year. And I am sure Nature will strike a balance in a way that will eventually allow me to see an adult Tent Caterpillar Moth.

June 17, 2012
A moth eclosed from a pupa that I collected from Gambel's Oak at Summerhaven, behind the Community Center

* Malacosoma tigris is scarcely distinguishable from the others based on its phenotype and/or genitalia.   It is closest to constrictum, which, mercifully, is found only in California.
* adults of tigris, incurvum, and californicum are very close and in some cases indistinguishable
* adults of incurvum and californicum are especially close and no genital characters are known that distinguish them.
* Stehr's (and all subsequent) taxonomy is based larval phenotypes (and hosts).
* I plan to call Stehr tonight.
* the good news: there are only four species in the Southwest.

Called Fred.  He says egg color is definitive.  If you can find any of the old egg clusters on the cherry trees that had tents in April, Fred says we can get a definitive ID.  Incurvum eggs are white; californicum eggs are grayish white.
Also, which seems important: incurvum and californiucm are only marginally distinct as species....and could be lumped by some...or at least would still be expected to be in some genetic contact.
I am sticking with my original thoughts:  Malacosoma tigris for your oak-feeders and M. incurvum for all others on Mount Lemmon.
I have enough reared adults and larval images to feel that this is the best we can do until we see egg clusters.  These dets are consistent with the larval images recently sent to me by Terry Fitzgerald, a social caterpillar guy at SNY Cortland. Anyway, that's my story and I am sticking to it.
No M. californicum until you prove it! (Usually, and only usually, californicum caterpillars have a pale middorsal stripe.)
Dave Wagner

Posted by Margarethe Brummermann at 11:09 AM