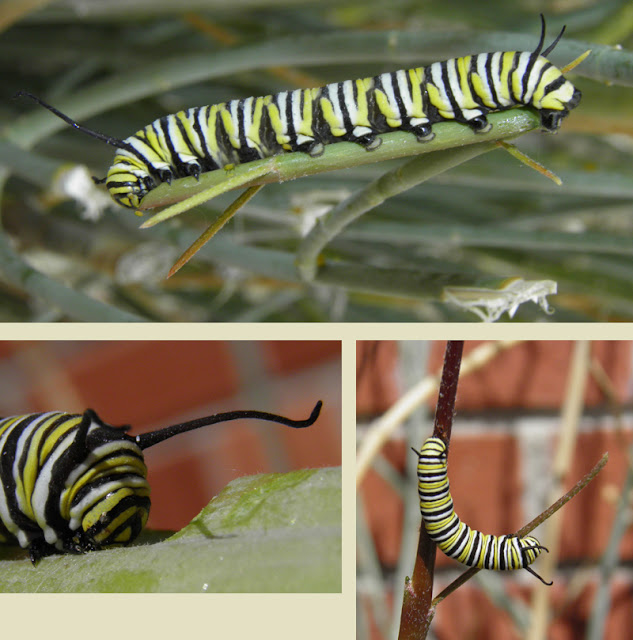 Last Friday my colleague Gene Hall showed me some Monarch caterpillars that are growing up on Desert Milkweed plants on campus. 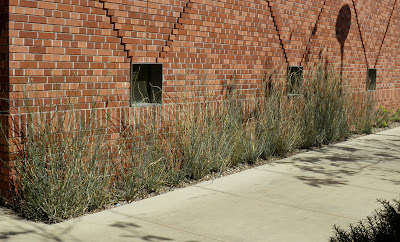 The plants are snug against the south-exposed brick wall of the Chemistry Building, so if the caterpillars survive the periodic drastic clipping by U of A gardeners, they have found a microhabitat that will sustain them even during the colder weeks of winter.
We found very small caterpillars around a centimeter in length, probably second instar, and a few that were more than an inch long, indicating that at least two females were ovipositing here lately. I did actually see two adult Monarchs in Marana last week. All these observations are data points off the main eastern or western migration route of the majority of Monarchs, but storms displace a number of them each year and we also seem to have some small, but constant populations around Tucson. 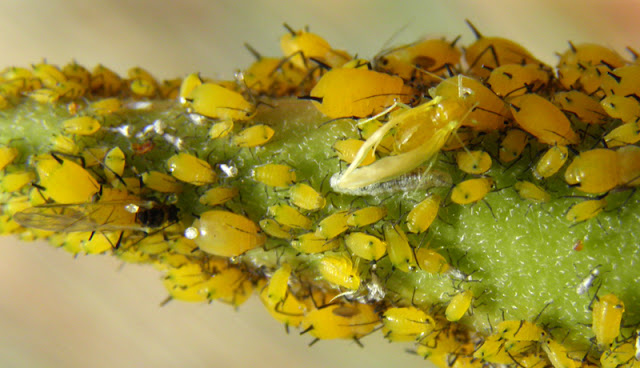 I took the opportunity  to photograph groups of bright yellow Oleander Aphids (Aphis nerii) that commonly feed on milkweeds. Besides hundreds of wingless individuals one group also included a few winged females. One of them was very freshly molted and teneral, with still soft wings and without mature pigmentation. (I will try to describe the complexities of Aphid reproduction and generation sequence in another chapter). 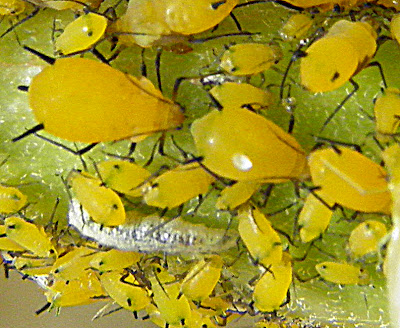 On the enlarged images I later discovered a syrphid larva that was feeding on the aphids (bottom left). It was nearly transparent and moved inconspicuously among its victims. 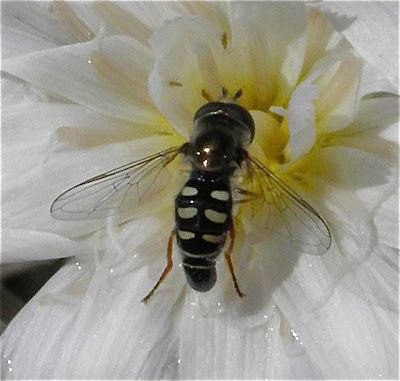 The syrphid larva could be the offspring of the male  Bird Hoverfly that I had photographed a couple of days before in the same area. 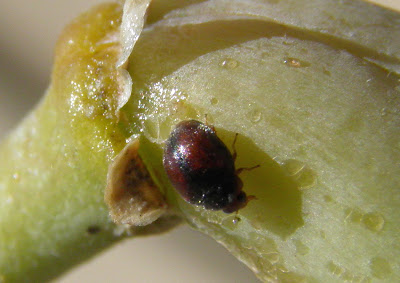 An only  2 mm long Dusky-colored Ladybug, a species in the genus Scymnus, was also preying on the smaller aphids. 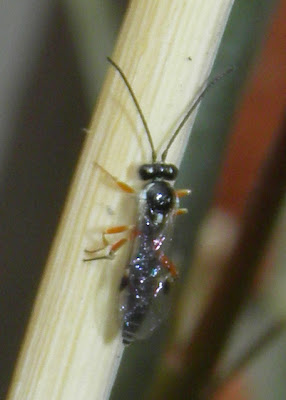 During the photo session, an Ichneumon Wasp appeared. It flew around the milkweed stalks as if searching for something, and I assumed that the parasitic wasp was planning to lay its eggs one of the Monarch caterpillars. When it landed very shortly, I managed only one unfocused shot, just for documentation. But it was enough: from the blurry image plus the description of the situation Bob Carlson on Bugguide was able to narrow down the identification to the subfamily Diplazontinae. All species of this group are believed to be parasitoids of syrphid larvae.

So with our short lunch hour excursion and some follow-up research we had discovered a whole complex ecosystem of herbivores, predators, and a parasite of the predator. All that right next to the wall of the Chemistry building, in an unpaved area that is only a few inches wide. 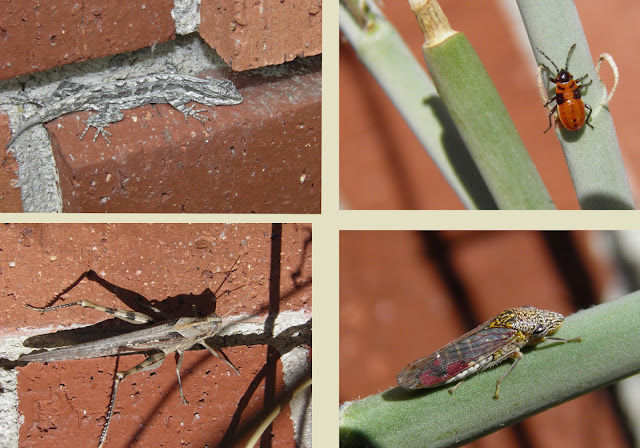 In the interest of full disclosure, there were also two ornate Tree Lizards, several Small Milkweed Bug nymphs, a Gray Bird Grasshopper and a  Smoke Tree Sharpshooter hanging out among the milkweeds.  Some, like the bug nymph, were there to sip the chemical cocktail provided by the milkweeds, others probably mostly to get warm on the sun-exposed bricks. Either way, it takes care of the energy budget.
Posted by Margarethe Brummermann at 3:51 PM