Packrats in our Compost Bin and in Science

In all biological questions, my husband usually refers to me. The latest was: "what do you want to do about the rat in the compost bin?" 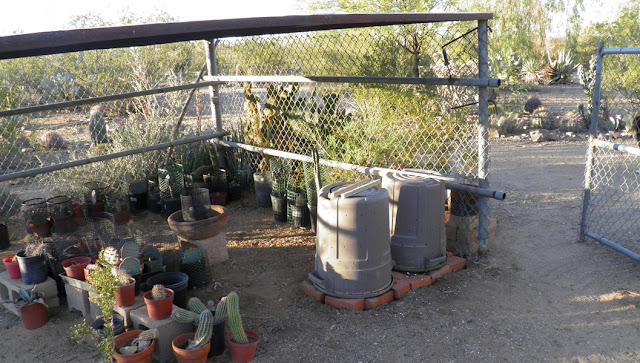 In kitchen and yard, we religiously save all scraps of organic material to let them decompose into fertile soil in two upside down garbage bins that sit with their openings on the ground. 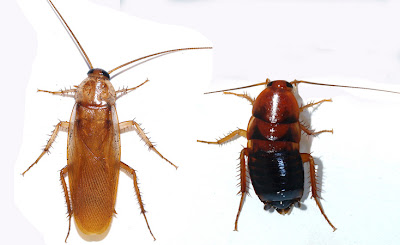 It works - industrious Turkestan Roaches seem to be doing a lot of the early break down, and that's no problem because the bins are far from the house in an old 4H-goat pen. The fence keeps out our Husky, Javelinas, Coyotes and Foxes, and rows of bricks around the bottom of both bins prevent most rodent intrusions. Somebody once chewed right through the plastic wall - so now there is a hardware cloth patch. 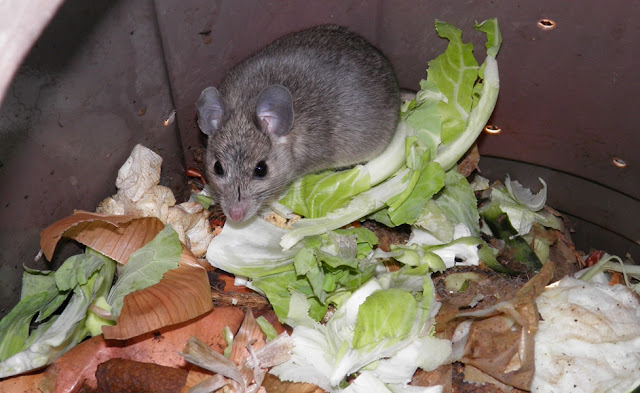 But for a couple of days there had been a packrat sitting in the cockaigne of lettuce leaves, cucumber seeds, carrot pieces, and onion peels. Gray and big eared, she wasn't shy at all - just glared at me from under the lid of the bin. I knew that my friend Ned Harris was looking for a packrat photo opportunity,  but I could tell that this background wasn't quite it.  So, a photo for myself (I'm much less critical than he) and then the release of the rat. First I tried to lift her by the tail like a white lab rat, but she desperately clung to the substrate and I could feel that the tail's loose sheet of skin would be sacrificed before I could dislodge the animal. So I just coaxed her onto a trowel, lifted her up to the rim of the bin and let her hop off . I wouldn't  try that with a wild Brown Rat (Rattus norvegicus). But this was a White-throated Packrat (Neotoma albigula), and I had noticed before that our resident females are rather calm-natured.  So now she can get back to her business of collecting Randy's cactus clippings to decorate her home. Notice those fences around single pots in the photo above? That's how we try to protect our favorites.

All over the Americas, there are many species of packrats. Our backyard with its scattering of Creosote bushes and cacti is the ideal habitat for the local species Neotoma albigula, the White-throated Packrat, and not even our five dogs and two mostly indoor cats seem to be much of a deterrent.

We live in an uneasy truce with the rodents. As the name says: they collect stuff to pile on top of their nests. But the nest can be in the down-spouts of our rain gutter with lots of collectibles left on the living room window sill that happens to be part of the way to the roof. That rat had to be evicted twice.

Another one added parts of the start-plug cables of my car to its midden. I used to park in the shade of a large Ironwood Tree. As the rats prefer working in the dark of the night, I now park over special, photocell-activated lights that Randy has sunk into the driveway. So far no further electrical disasters to report.

Pack rats are also carriers of several transmittable diseases. Hanta Virus has been found in Pima County Neotoma populations, but since we are (hopefully) never exposed to a room full of dried, pulverized, airborne rat droppings that are the most likely source of infection, there seems to be no problem.


Pack rats middens are also the favorite breeding ground of Kissing Bugs. Every summer night we can find several of those, usually engorged with blood from our dogs,  around patio lights or my black light. Kissing Bugs are part of the Assassin Bug family Reduviidae. Adults usually appear from May to early July and disappear during the monsoon season. Immatures have been found crawling around even in winter. These bugs bite rats, dogs and people alike to drink their blood. They attack at night and use an anesthetic, so their bite goes unnoticed. If you don't get allergic (which can happen after repeated exposure) there seems to be no reaction to the bite itself, no itching or swelling. But Kissing Bugs can transfer the tropical flagellate protozoan Trypanosoma cruzi that causes Chagas disease. This parasite has been found in Arizona packrats. Luckily our local Kissing Bug species Triatoma rubida seem to abstain from behaviors that would transmit the parasite. (I will get back to Kissing Bugs in later blog). 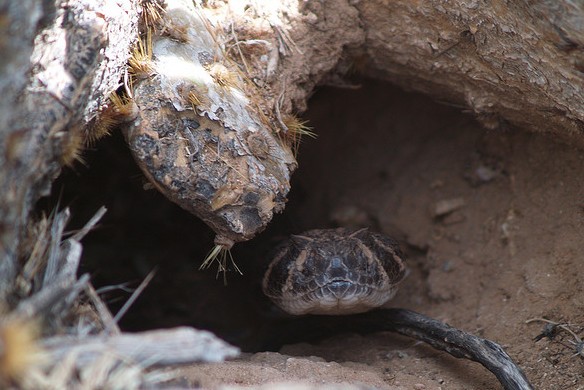 Packrat populations may also attract rattlesnakes. Indeed, we had a big old Diamondback living in the entrance of a midden. I couldn't tell whether he shared it with the rats or whether he had already devoured his hosts. We were acquainted with him for years until he scared me several times too badly - by being nice, really: he just didn't rattle anymore when I was out there single-mindedly concentrating on my photography, and several times I found his big head less than a foot from my ankle or my dogs' paws. The midden in question was under a big old opuntia. I finally lost my nerve and we relocated the snake to the state land. It took less than one summer for the rats to destroy the cactus.

So there are plenty of reasons to dislike packrats. But I can't help finding them also entertaining and fascinating.

Low desert packrat species share their extremely arid and hot habitat, without access to fresh water, with a masters of desert survival, the Kangaroo Rat. But while K-rats can live on dry seeds thanks to the enormous concentration capacity of their kidneys,  packrats void copious urine.  Thus they are only able to maintain their water balance as long as they have access to their favorite high-water-content food, succulent plants like cacti and agave (Schmidt-Nielson and Schmidt-Nielson, 1952).

Their most special adaptation, which gives packrats their name and makes it possible for them to live in very hostile environments, is their ability to construct huge, insulating middens. Packrats seek rock crevices, caves or dense patches of vegetation as shelters, but they improve these by piling on sticks, pieces of cacti, bones, spent shells from guns, toys - just about anything portable that catches their eye. These piles can be conspicuous and over 2 m high in some species. Underneath this fortified den that protects from predators and buffers against temperature extremes is a burrow system with chambers serving to cache food (Packrats do not hibernate) and the small nest made from soft, shredded material.

When we evicted the 'down-spout-rat' by turning on the water-hose I was surprised that it showed neither fear nor aggression even when cornered. Now I observed the same 'tame' behavior in our compost-bin guest. This character has probably evolved in packrats because the fortified den is a save haven for this animal that has no energy to spare for fight or flight. Packrats live under chronic energy stress due to their diet of low energy plant material (Cactus, Creosote, Juniper) much of which is also rather indigestible because it is loaded with defensive chemicals like terpenoids.  (McClure and Randolph, 1980).


Amberat, a treasure to science
So Packrats are extremely faithful to these middens that their survival depends on. Good den-sites are in short supply and the accumulation of material is costly, so generation after generation of the female line uses the same den, adding material and caching food. Over years, decades, centuries, even millennia, urine accumulated and dried in amber-like clumps under the nest - this substance is called amberat (Some starving miners around 1849 actually tried to eat the 'candy-like food').
Today, paleontologists and archaeologists are finding the Southwestern packrat middens a plethora of valuable information. Fossil plant pollen are imbedded in amber-like urine deposits and the whole den  is a collection of animal and plant records that reach far back into the Pleistocene.
As there are no pollen-preserving peat bogs in the Southwestern deserts, and pollen studies were limited to lake sediments in only a few locations, the study of packrat middens became one of the most important resources for the understanding of the changing biogeography of the Southwest from the Pleistocene to the present.


Posted by Margarethe Brummermann at 11:54 AM