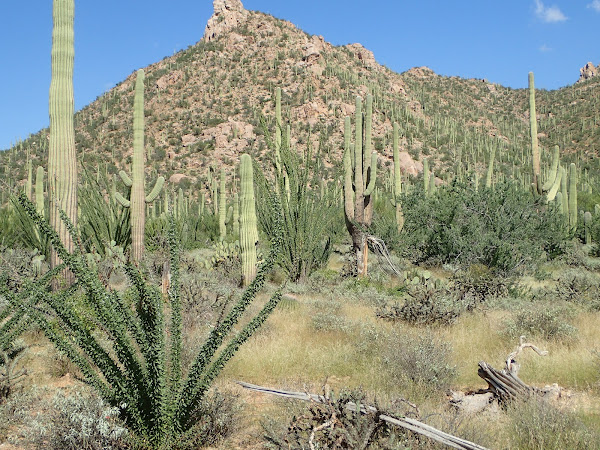 Yesterday I cruised through Saguaro National Park West on the open part of Golden Gate loop. We got record monsoon rains in July and August, so every leafy plant, including Ocotillos has greened up. The Saguaros must have doubled their circumference. In the park, flowers are relatively rare at this time. 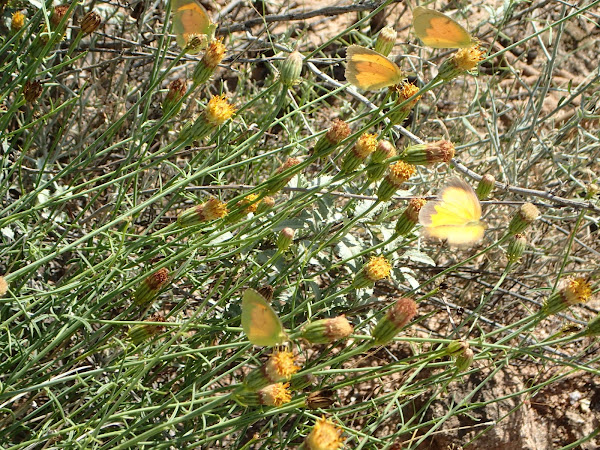 Thousands of nectaring butterflies are clinging to a few yellow Asteraceae. Some bushes, noticeably Sweet Acacias and Wolfberry (Lycium), are already heavy with fruit. 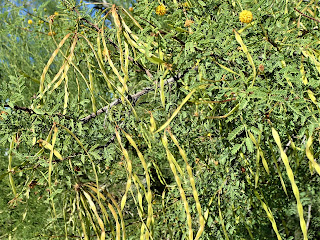 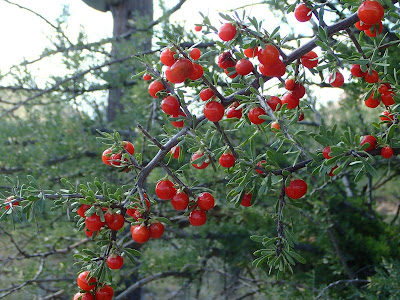 After snacking on sweet berries for a while, I remembered one of my missions: to check Lycium sp.bushes for Echenopa permutate, nymphs or adults. One of my clients is working on their audible communication and I have a standing order for life specimens. 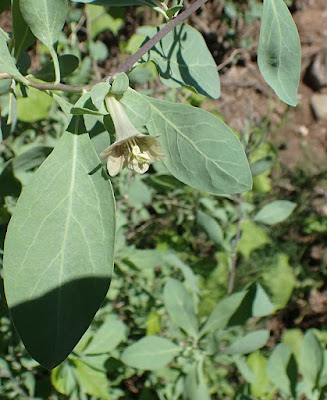 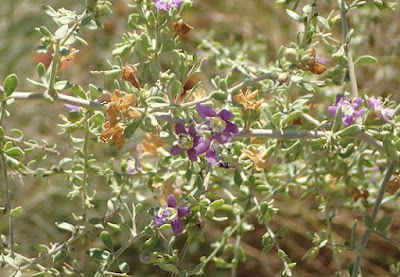 Lycium brevipes from Mexico, a common plant in Nurseries in AZ 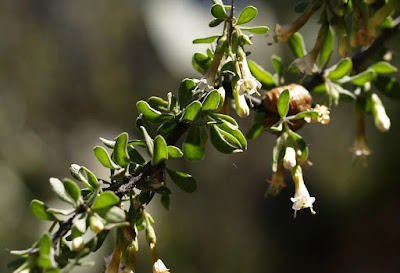 Lycium andersonii, probably our most common desert species with nearly succulent small leaves and small whiteish flowers While not finding any treehoppers this year - the Lycium plants were obviously drought-deciduous and this year put out leaves only after the first monsoon rains - I did learn something about the available Lycium species in Arizona. And since google brings up the popular Goji Berries with any Wolfberry search, but then proclaims that they (all?) stem from China, let me clarify here: Goji berry is a Wolfberry (genus Lycium) from China, but we have quite a number of endemic Lycium species in the US and especially in Arizona. With edible, probably healthy berries. The first bushes I checked looked extremely healthy. Only a few berries had been squished by a hungry Green Fig Beetle (Cotinus mutabilis) I have learned not to expect phloem-juice-sucking treehoppers on bushes like that. With my close-range binoculars I finally spotted (from the car!) a lot of movement in a single Lycium bush that looked more than a little bedraggled. 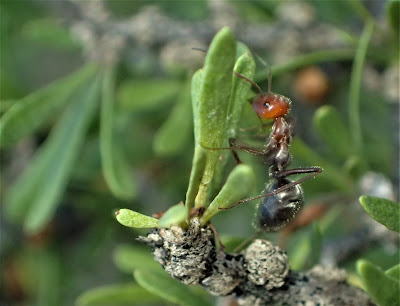 Most of the movement that alerted me came from red-headed ants that were surprisingly difficult to photograph. They appeared to be all one species but different size casts (?) in addition to these constantly running ants, dozens of other species of insects kept appearing and hiding again while I watched just a small area of gnarled twiggs. 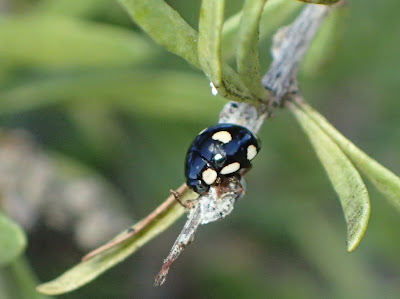 The only beetle sp. present, represented by a striking number of individuals, was a ladybug in the genus Hyperaspis perhaps sp. conspirans. This may provide a hint of what’s going on: Hyperaspis mainly feed on Aphids and scale insects. The lumps that made the twigs so gnarly were probably scale insects (or caused by them). While the ladybugs may have been actively hunting for those, all the other insects were probably there to lick the sweet honey dew that the sedentary bugs secrete. 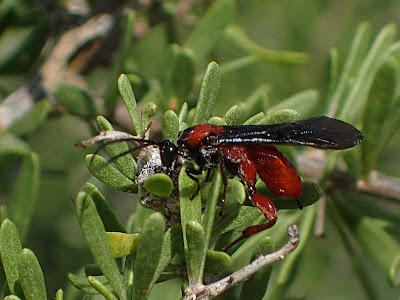 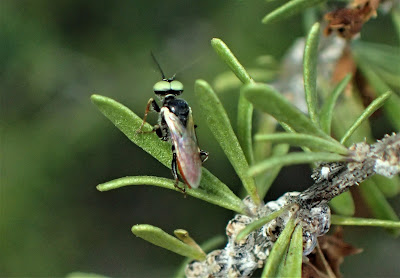 These 2 wasps, a Crabronid and a Braconid are just examples of a variety of hymenopterans most of whom evaded the camera. 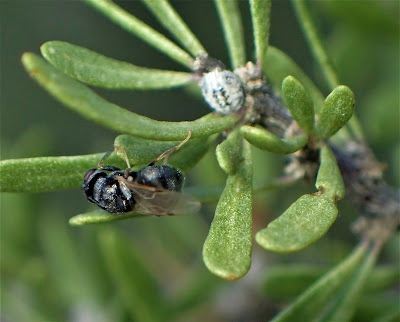 Flies of several species were also heavily represented in the melee. 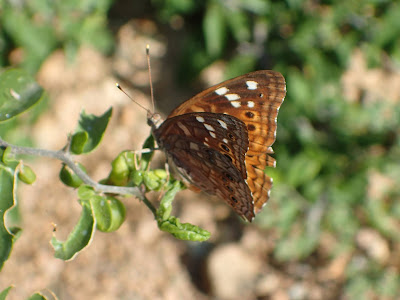 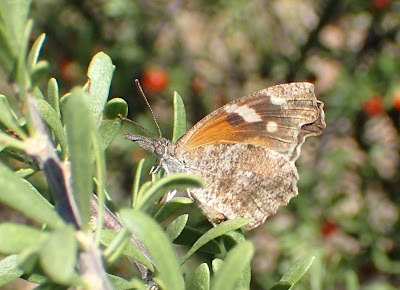 Empress Leilia and American Snout stuck their probosces in, while none of the ubiquitous sulfurs seemed attracted to honey dew Sadly, I saw no trace of the Membracids (treehoppers) Enchenopa permutata that I was looking for, so I am showing male, the ‘horned’ female and a nymph from another trip which took me to Box Canyon, Santa Rita Mountains. 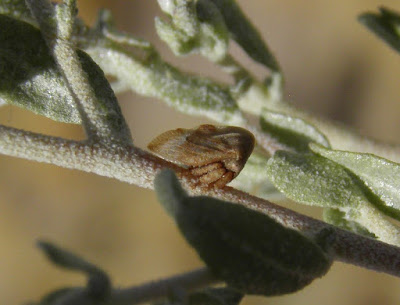 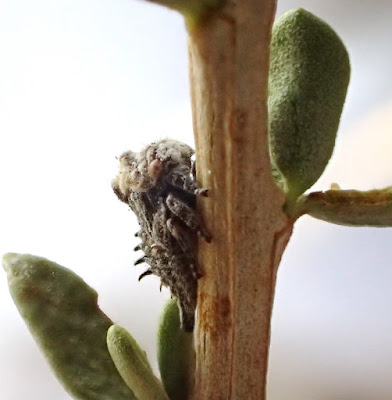 In the wetter spring of 2015, we found Enchenopa permutata in May, and now it’s September, so this may be the wrong season. But I had been hoping those small bugs might be multigenerational. I will keep looking.
Posted by Margarethe Brummermann at 5:15 PM