The colors of arthropods

Evolution has produced many outrageously colorful arthopods. The driving factor may have been communication, intraspecific to attract partners or interspecific to warn or deceive predators.
Many patterns and color combinations that appear out-standing when seen out of context may be very cryptic on the right, natural background. Pigments also protect underlying tissues from radiation damage and play a role in thermoregulation. 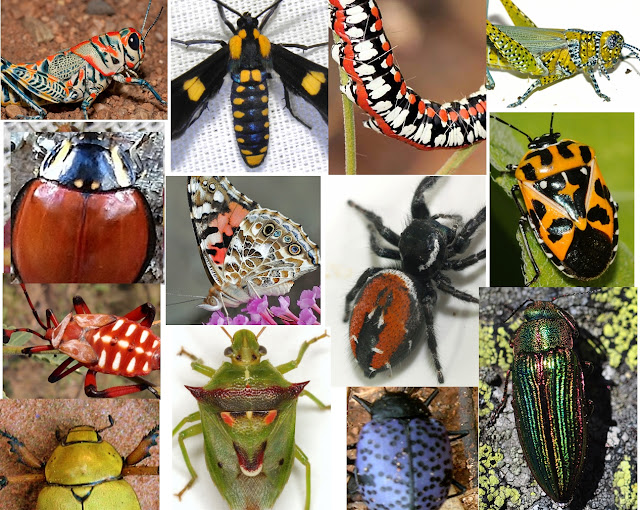 Colors of arthropods can be based on several different phenomena:

Transparent epithelia that allow  hemolymph or inner organs be visible and therefore to determine the outer appearance. The abdomen of a mosquito is red shortly after a blood meal, and some spiders adopt the color of their prey if they feed on highly pigmented insects. They 'become what they eat', for a short time.

Many colors of arthropods are based on organic pigments that are embedded into the exoskeleton or cell layers directly underneath it. These pigmental colors are based on the partial absorption of light. The pigments (carotenoids, ommochroms, flavenoids, quinones, etc) are obtained from food and sequestered or products of the insect's metabolism, often by- or waste-products, and their stability is based on the animal's living, active metabolism. Some arthropods have the ability to change these colors actively (Crab Spiders, Tortoise Beetles). Pigment based colors typically change or fade after death.

Structural colors are either based on the selective refraction of reflected light by the exoskeleton or by living cell layers directly under a transparent cuticle. I cannot find definite explanations of the mechanism, but these refracting elements in the latter seem to consist of layers of lipid droplets.

Many tortoise beetles are able to control these refractors, effectively switching from a bright gold metallic to a dull brown or red appearance.

The permanently metallic appearance of many other insects is created by the unique structural arrangements of many dozens of layers of exo-skeletal chitin. The cuticle, which is just 10 millionths of a meter deep, has some 70 separate layers of chitin—a nitrogen-containing complex sugar that creates the hard outer skeleton. All these layers have different refractive indices.
Incoming white light (sun light) is refracted through—and reflected by—each interface giving, in particular, phase differences in the emerging reflected rays. For several wavelengths in the visible range, there are many reflected rays whose phase differences allow for constructive interference. This leads to the metallic appearance of the the insects. The resulting colors are called 'structural' as opposed to 'pigmentary'. These structural colors outlast the death of the insect. (Loosely quoted from  "Visible light reflection spectra from cuticle layered materials," by Cristian Campos-Fernández, Daniel E. Azofeifa, Marcela Hernández-Jiménez, Adams Ruiz-Ruiz  and William E. Vargas  Optical Materials Express).
The cited study was concerned with Costa Rican Scarabs that appear golden all over.
Very shiny beetles like those may blend in with the multitude of dew or rain drops sparkling on the foliage around them, especially in the dim light of the tropical rain forest.

Metallic patterns on  parts of larger bodies may also break up the larger shape and hide it that way. I have noticed this for example in beetles and caterpillars that live in the lacy foliage of mesquite or juniper. Seen from below, against the light, these insects are less visible than their non-reflecting relatives.

Does the metallic appearance of the exoskeleton  indeed indicate a certain hardness and armament of the wearer? Several parasitic bees that seem to get into scuffles with their host species  appear particularly metallic.


Not to forget: The colors of butterfly wings are also structural, even if they do not usually appear metallic due to the small size of the colorful sub-units, the scales. In some species, however, the arrangement of the scales is such that iridescence is achieved. At the U of A, studies are under way, looking into the importance of these direction dependent flashes of color in the partner choices of our Pipevine Swallowtail.


Posted by Margarethe Brummermann at 4:18 PM