In summer in the mountains of AZ, we often see huge congregations of Lady Beetles. They may migrate up to higher elevations to escape the oppressive heat in the valleys.
In the mountain meadows around Flagstaff, a little parasitic wasp is ready for them: Dinocampus coccinellae, a braconid wasp, stings a ladybug to oviposit. The wasp's larva then develops feeding on the beetle's heamolymph. Also transferred is a virus: D. coccinellae paralysis virus (DcPV for short). The virus multiplies in the developing wasp larva and eventually infects the ladybug's nervous system. At the time the wasp hatches and pupates, the virus immobilizes the ladybug. The brightly aposematic and toxic beetle is forced to stand guard over the silk cocoon that its former unwelcome guest has spun beneath it, basically providing protection for the pupa. The beetle is still able to move, but not to walk away. The DcP virus may actually enhance the deterrent effect by making the beetle twitch. In a recent study, no wasps without virus were found, so there was no test group to see what happens if the wasp pupa has to develop without its protector. Surprisingly, researchers did find that a fair percentage of beetles actually makes a full recovery. Who would have thought? It is not clear though if those recovered beetles are still able to reproduce. And would the be possible hosts to the same sp. of wasp again? Would they be immune to the virus the second time around? 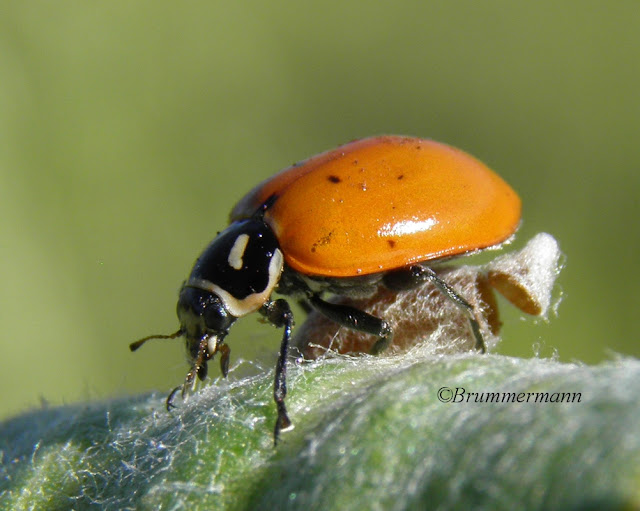 The wasp cocoon in my photo was already empty, and the beetle looked quite healthy, if still tethered. Ready to go, actually. I found it and several others on a mountain meadow near Snow Bowl, Coconino Co. AZ  8/5/2015'

Original research by Nolwenn M. Dheilly et al.  The topic was recently also treated by Eric Eaton in his blog and by National Geographic' website.
Posted by Margarethe Brummermann at 7:59 AM