On Saturday morning (8/22/2015) I met with Jeff Gruber at Proctor Road, Madera Canyon to go bug hunting. Jeff is the most excellent macro photographer whose virtual insect collection  on BugGuide years ago gave me the first glimpse into the possibilities of stack montage photography. He was searching for myrmecophile beetles (beetles that live in ant nests).


Because this involves the slightly Sisyphean job of turning rocks of the size one just about cannot manage, we started earlier than usual for insect observations. At the first nest  Jeff found a tiny (around 1 mm) hister (?). I leaned in to get some shots of workers and pupae for my impending talk about ants at the Senior Academy.
While the ants who had the roof lifted off their nest were quite peaceful and never bothered Jeff, three members of a neighboring Pogonomyrmex colony  climbed up inside my wide cargo pants and nailed me. Outch! I was wide awake after that. 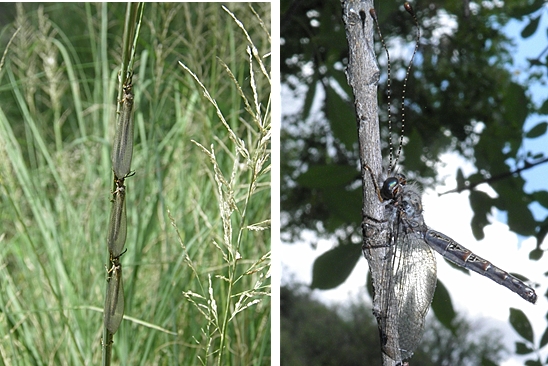 In grasses and shrubbery, night active neuropterans were hanging out for the day. There was one Owlfly,  but most were anlions (I hope their larvae will get a lot of Pogos!) that lined up along Sotol leaves and blades of grass. There, they all moved around in unison, trying to hide behind their narrow perches. 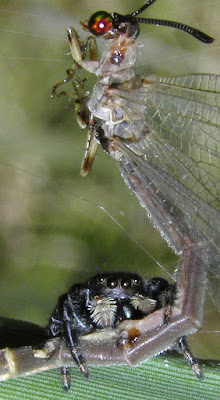 This behavior made photography difficult but did not deter hunting jumping spiders in the genus Phidippus.

Along Madera Creek and Proctor Roads, Robber Flies seemed to be even more prevalent than usual. Most of them perched at the ends of twigs surveying the area for prey. The ones that were already  feasting all had beetles for breakfast: so that's why I could hardly find any.

The notable exception were leaf beetles of the species Leptinotarsa haldemani on a completely leafless Wolfberry bush and Zygogramma signatipennis whose larvae had shredded the leaves of Tithonia thurberi until only fine lacework was left.

Still, the asteraceae were in full bloom and attracted scores of butterflies. We are both no lep people, but the amazing sight was not lost on us. A local butterfly hobbyist stopped by because he saw our nets: within minutes he yelled back that he had seen 28 species, including  Microtia elva (Elf ) that he was trying to breed.


Luckily I had documented the tranquil scene before he showed up - just the creek rushing, Gray Hawk fledglings calling, and dozens or hundreds of butterflies dancing among the flowers in the dappled shade of hackberries, junipers and oaks. For better quality, please watch the video through this link 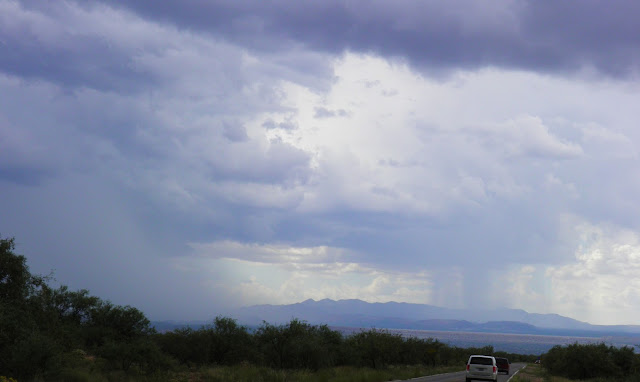 Eventually around 2 pm the thunderstorms forced us back to our cars. I drove home via Mission Road through the reservation and found myself in the aftermath of a downpour where the road was covered in sand, rocks and other debris.
The radio program was constantly interrupted by 'damaging wind and hail' warnings and on the intersection of Ajo and Mission it felt like a load of rocks was pelting the car. But I escaped westward into bright sunshine and watched the dark wall rushing behind me towards Tucson.

Posted by Margarethe Brummermann at 9:58 PM