Last night we were watching a movie when in the background, there were suddenly very loud trilling noises. If that was a cricket, it was on steroids. Now if the movie had been some Amazon nature flick .... but it happened to be a Norwegian Mafia movie, set in snowy Lillehammer. The noise soon reached a volume that droned out the dialogue (kind of hard to follow anyway as my Norwegian is getting rusty), so we investigated. The sounds came in through the open kitchen door. Outside on the patio the dogs had spilled a lot of water from their tub. In that puddle, half a dozen Red-spotted Toads were courting, making great use of the acoustics of our patio, especially a narrow space between the tub and a big wooden box. Mecki was lying close by watching in obvious amazement.

Anurans (frogs and toads) produce mating calls using the huge swelling of their throats to amplify the sound produced by air blown from their lungs over simple vocal cords. Such sounds are unique to individual species and are used during courtship (a prelude to mating). Spectrograms of the calls can be used to identify frogs or toads species. In most species the peak noise level measured 50 cm in front of a calling male exceeds 100 dB, but of course body size is an important factor.
Male toads eager to mate tend to grab anything vaguely reminiscent of a female. When other males of the congregation happen to be approached by mistake they utter a different, shorter squeak, demanding to be released. I think that's what's going on in my video. I'm pretty sure that last night, there were no females around at all, and in the morning there were no strings of eggs to be rescued from the concrete patio floor. The monsoon rains have not started yet and I don't expect the females to show up before that happens. Maybe they need the drumming of heavy raindrops to wake them in their underground resting chambers.


Red-spotted Toads occur all over Arizona, but they are highly adapted to procreate in arid areas where puddles may last only for a very short time. They and the desert Spade Foot-species have some of the shortest tadpole phases among anurans so their offspring is ready to leave the water and stand (or crawl) on its own tiny legs within a few days.

Most of our other toad species need some more lasting water source like this goldfish pond in a friend's backyard at Cochise Stronghold or the remnants of Sabino creek where Ned Harris photographed the big Sonoran Desert Toads.

We have Sonoran Desert Toads in our desert habitat too (in Picture Rocks). There is no open water for miles. Still, the same individual mature toads emerge year after year to harvest bugs at porch lights and my black light. They are huge, old individuals that can probably remember better times when our part of the desert still received enough water to at least occasionally allow them to breed. But for the last 10 years at least, these Sonoran Desert Toads have been celibate and childless. 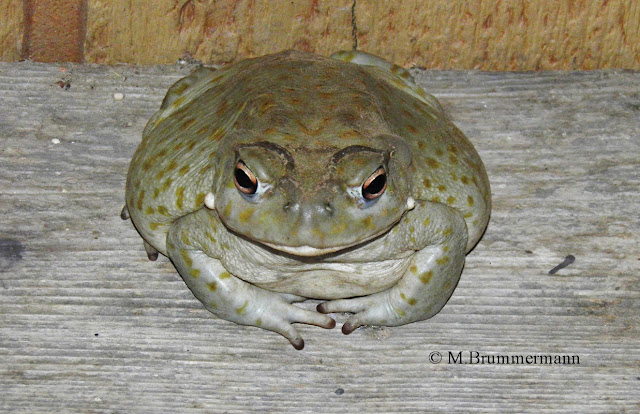 Let's wish them better luck in the future.
Posted by Margarethe Brummermann at 10:42 AM