This blog is the sum of my contributions to our SW Insect group on Facebook for the week-long theme 'Mantodea'
As usual, we looked at species diversity, biological cycle, physiology, behavior, and popular myths. 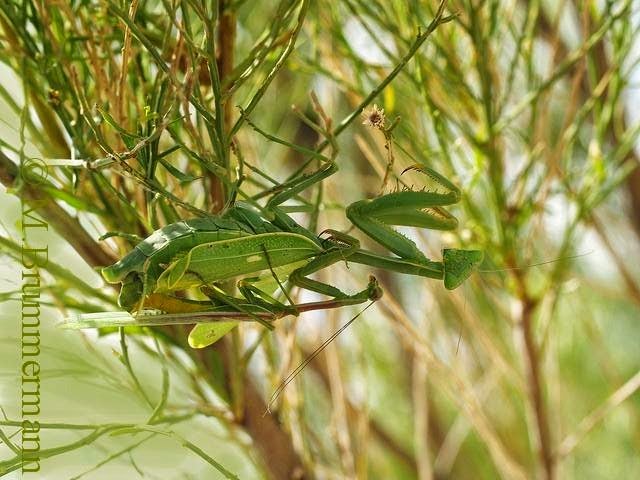 One story that is NOT  a myth to be debunked: Female Mantids tend to bite their mates heads off. Obviously, it's not the rule as this happy couple demonstrates, but it does happen quite often. Research has shown that decapitation in no way interferes with the successful completion of the mating. Actually, it showed that the headless males were more eager than ever. Making the most of their last chance .. 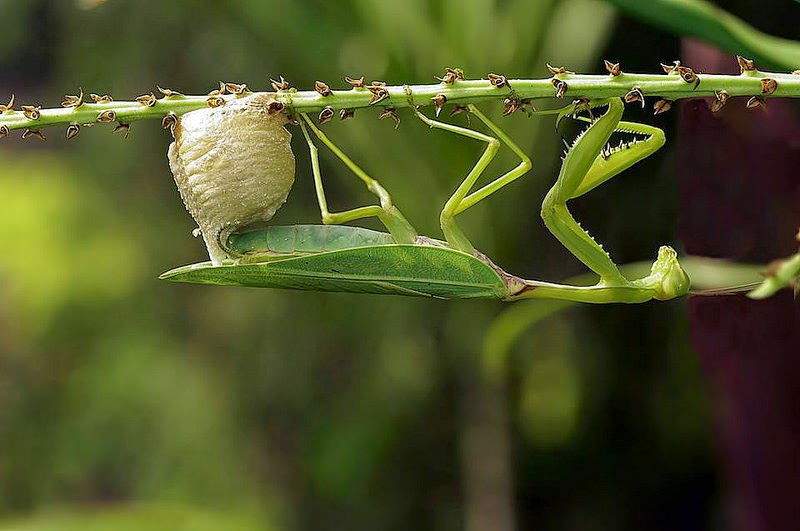 With his permission, I am posting this great photo by Amit Mahajan, Mumbai, India, August 2014 because I cannot find mine of an ovipositing Manits.
He writes: When the female mantis is ready to lay eggs, a protective covering called "ootheca" will be extruded and this will serve as the housing of the eggs. The eggs will then be deposited into the folds of this ootheca.
The shape of the one produced here is similar to that of a Chinese Mantis. That species is sold by and for gardeners for biocontrol. Please do not buy (release) them. They will interfere with the balance of our natural system that already has a number of Mantids that are superbly adapted to the Southwest. So far I have not found any Chinese Mantis in Arizona, but Iris oratoria, a European import can be found. 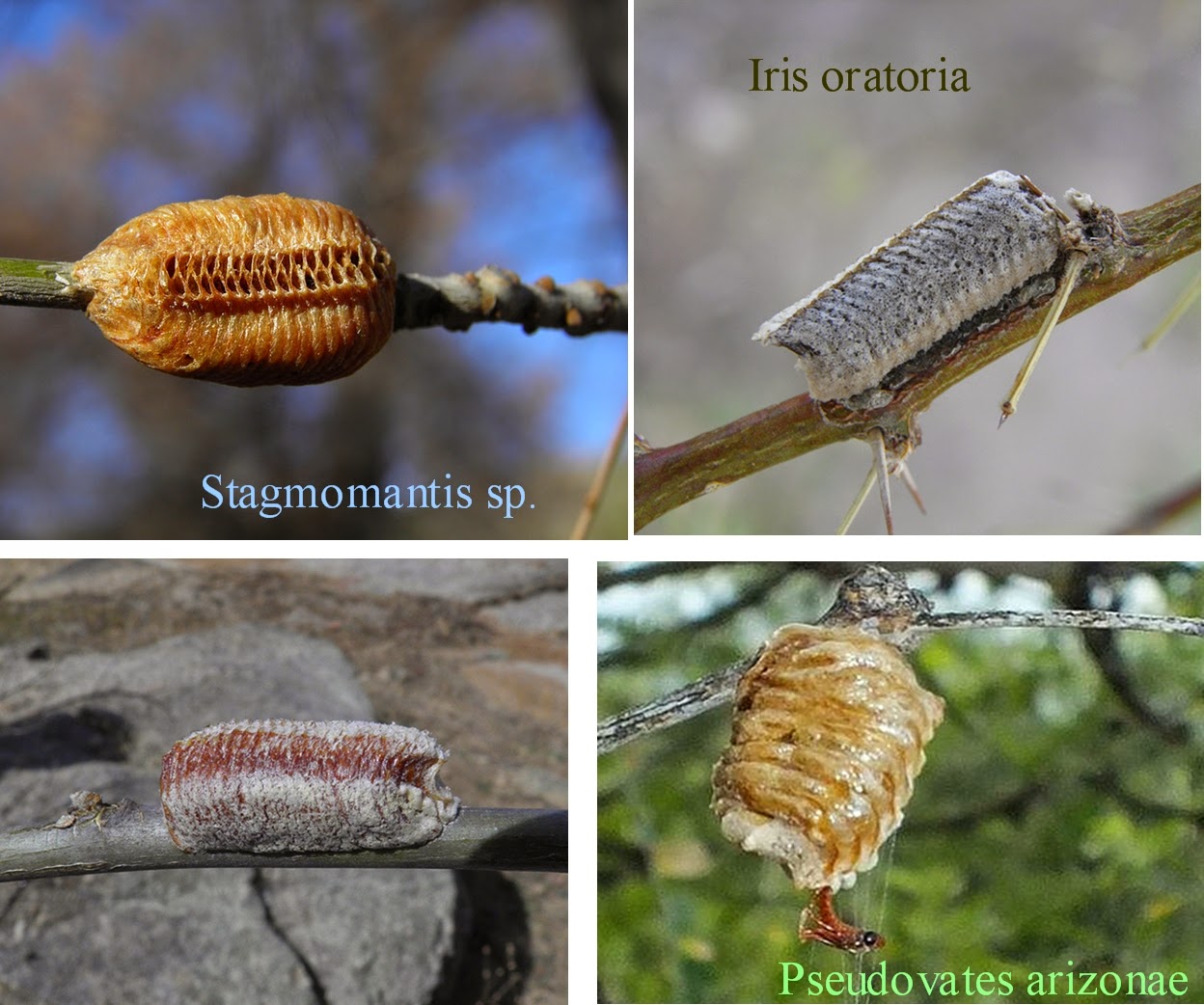 The oothecae of mantids are species specific in shape, coloration (?) and probably size. Here are a few, Stagmomantis sp. are the most commonly seen ones in Arizona. Ground Mantids, Litaneutria minor should also be common, but I don't know where and for what to look. Top right and bottom left may both be Iris oratoria, but I'm not sure. The Pseudovates arizonae ootheca, bottom right, is cropped from Tony Palmer's excellent shot that he posted a while ago on FB 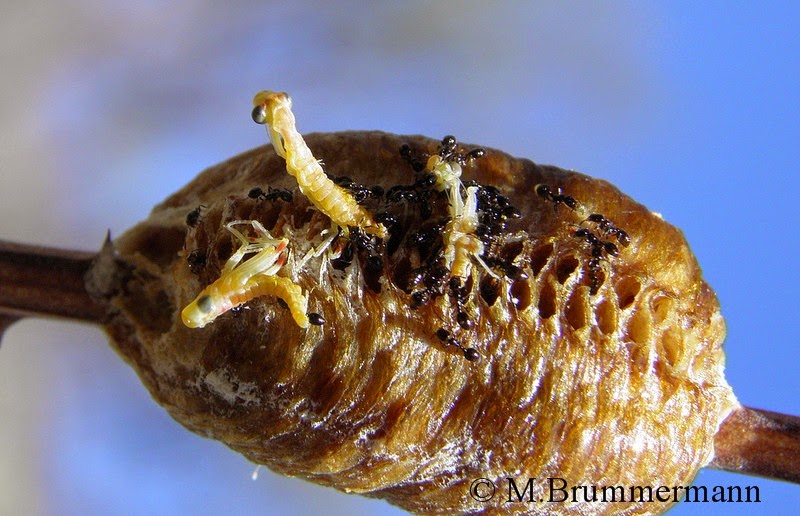 Stagmomantis ootheca with hatching nymphs. Mantids are hemimetabolic insects. The nymphs will go through several molts while growing up, but the basic shape will not change. Stages of nymph between molts = instars. Wing buds will be apparent in the late instars. There is no pupation in hemimetabolic development. The adults will have sexual organs and, in this species, wings. After that stage is reached, there will be no further growth or molt.

Most oothecas of mantids have little round holes. These are not the exit holes of the mantid nymphs - the nymphs emerge through the gaps in the zipper-like structure that the mother has built into the egg mass cover. But like most large accumulations of eggs and embryos, the ootheca attracts parasites, mostly little specialized Chalcidoidea (Chalcid Wasps) in the genus Podagrion. 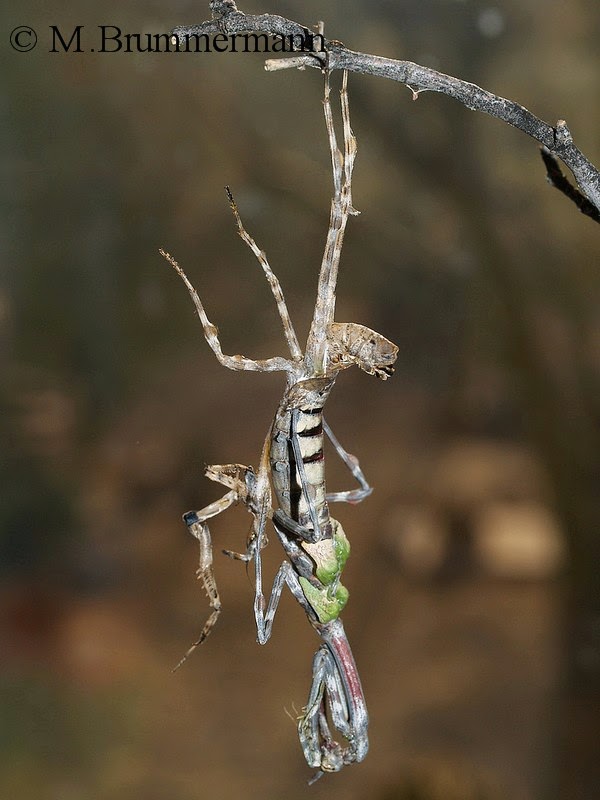 Arizona Unicorn Mantis nymph molting between instars 4 and 5: this is the last molt before adulthood and  the 4 budding green wings are recognizable 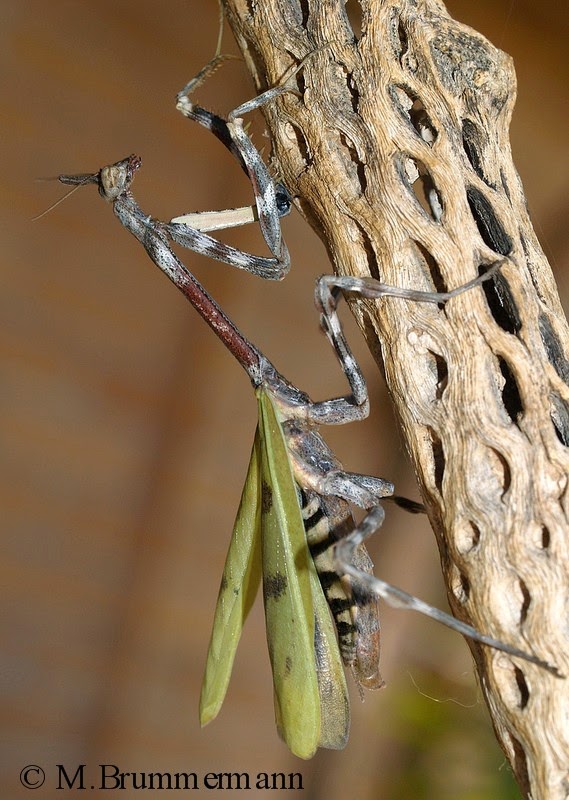 Adult Arizona Unicorn just after her last molt, winged and ready to find a mate.

The males of this little mantis are very common at porch lights around our house. The females are flightless and seen more rarely. 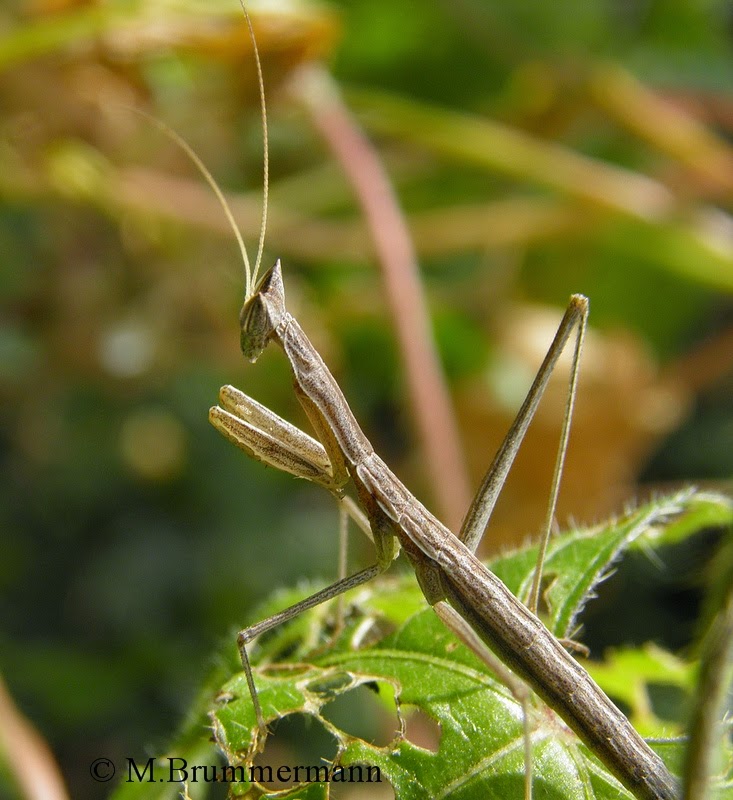 
Here is my favorite mantis photo:
Raptorial arms and binocular vision make them formidable predators.
Mantids are characterized by binocular vision and the ability to move their heads relative to the rest of the body. This feature that endears them to many human observers is of course vitally important to a hunter who needs to judge whether prey is within striking distance.

As visually oriented predators that are day and night active, Mantids also have eyes that function well under extreme lighting conditions.

Their eyes, like most insect eyes, are compound aggregations of multiple vision-units, Ommatidia, that each consist of a lens, a cristalline cone and a receptor cell. These units are isolated from each other by pigment in pigment cells, allowing for focused, separate light reception of each unit.
In species that, like Mantids, are both, day and night active, the pigment enclosed cylinder tends to be especially long. You can see the clean separation of the ommatidia - a small, dark pseudopupilla seems to stare at you from the otherwise light-colored eye. The pseudopupilla is formed by those ommatidia whose angle is such as to allow you to look all the way down through the pigment enclosed cylinder into the depth of the eye. The light areas of the eye are ommatidia that don't look directly at you, so all you see is the reflection form their pigment cells.
But at night, the same mantis eye is dark all over and has no clear pseudopupilla. What happened? Most of the pigment in the pigment cells has moved towards the center of the eye, leaving the outer part of the ommatidium without focusing shield, but open to more incoming light. The reception is less clear this way, but brighter. The same principles that work on our own dark-dilated eye are at work.

Posted by Margarethe Brummermann at 5:35 PM