Contributing images to a great new book on Scarabs 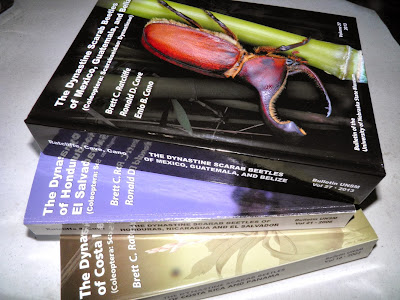 Today we found a very heavy package in our PO Box. It contained the Mexico, Guatemala and Belize volume of 'The Dynastine Scarab Beetles' by Ratcliffe, Cave, and Cano. It's a comprehensive treatment of the 198 species of Dynastinae that occur in those countries, with English and Spanish keys, descriptions, images, distribution, and natural history.  I received this and the two preceding volumes of the series about the other Central American countries for my contribution of several images to the Mexico volume.
In the book, every species is depicted in form of a drawing, or in the last volume in form  of a specimen photograph with a white background. 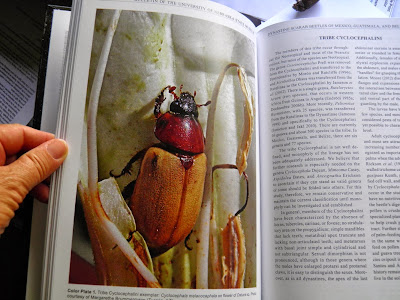 But the description of every tribe begins with a full page image of a beetle in its natural surroundings.
A couple of years ago, Brett Ratcliffe saw one of my images of Cyclocephale melanocephala in this blog and asked whether he could use it for the introduction of the tribe Cryptocephalini. So my little bug, sitting in the heart of a Datura flower made it into the book. I also got a list of other species to look for. Of course, my images are usually of Arizona specimens. But as we demonstrated on our Sonora excursion the beetle fauna of course ignores political boundaries and Arizona shares many, if not most of its species with northern Mexico. It's the tropical part of the country that's really different. 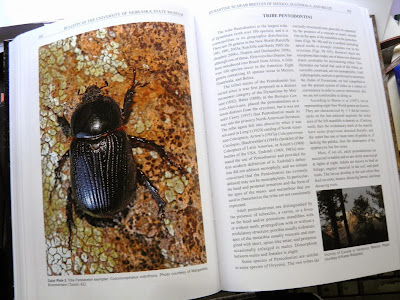 So when the next monsoon season rolled in, I kept an eye out for the species on Brett's wish list and got a Coscinocephalus cribifrons in Miller Canyon (Huachuca Mountains) as the exemplar of the Pentodontini tribe. 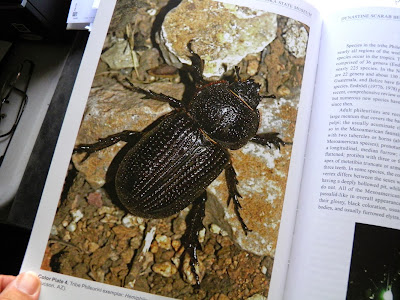 The Hemiphileurus illatus specimen that represents the tribe Phileurini was crawling around on the rocks of our drive way in the Tucson Mountains. 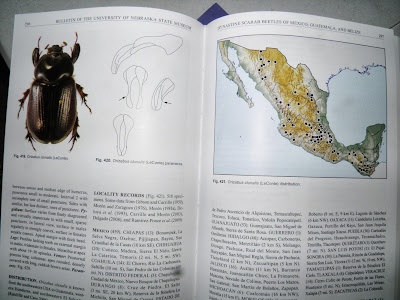 I am very proud to have contributed something to this very thorough scientific book! I wished I had one like it for the other beetle families and subfamilies too.
I am already studying the distribution patterns of beetles that we might encounter on the MABA expeditions next year. It will be very helpful to know which species to expect and where to look or how to attract them.
Posted by Margarethe Brummermann at 5:38 PM