A couple of years ago Charlie O'Brien and I were traveling through the San Rafael Valley close to the tiny town Lochiel at the Mexican border when suddenly two hares came racing across the undulating grassy hills. They were chasing each other the way courting hares do, flinging themselves high into the air and thus overtaking each other in the vertical rather than the horizontal plane. Even from a distance of several hundred feet we could see that they each had a large white area on their flanks. A year later I was returning with Eric Eaton from a bug-party in Sierra Vista, so it must have been in late August. We took the long way home, around the Chiricahua Mountains and, at dusk, were just turning north again in the Canelo Hills. Landscape-wise the area is the northern extension of the San Rafael Grasslands. We may have even been talking about my earlier observation. At any rate, we saw another Jackrabbit with white flanks. Eric got out of the truck and followed it for a while to get some photos. I had only my 50mm macro lense, so I didn't even try. I never saw the result of this pursuit, but I think it was already too dark to shoot a moving target.

I was reasonably sure then that the hares we saw on both occasions were white-sided jackrabbits (Lepus callotis) also known as the Mexican hares. Literature gives Northern to Central Mexico and Hidalgo County in SW New Mexico as the distribution range of this threatened species. But occurance in Arizona is assumed possible but has not been clearly recorded. So did we actually see L. callotis?

The two other possible species are Black-tailed  and Antelope Jackrabbit, and both are widespread and common in Arizona.

On our property in Picture Rocks, Arizona, we regularly see the Black-tailed Jackrabbits (Lepus californicus). Especially the youngsters that congregate to drink at our bird bath are literally 'all ears'. They can use these huge appendices for heat dissipation, and when it's hot, a bright pink glow from expanded blood vessels makes the ears look even more impressive. They feed on anything here. They clipp creosote branches, graze on cheat grass, love cactus fruit whose seeds they distribute undigested in their pellets. When a barrel cactus falls over and exposes its thornless underside, a Black-tailed Jackrabbit can hollow it out in a single night. Only a huge pile of pellets will stay behind. 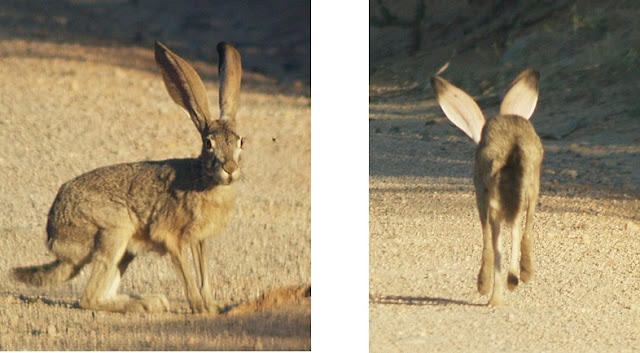 Like the White-sided Jackrabbits, they have black areas on the tips of the ears, but on the outside, and black tails. But their flanks are tan colored like the rest of the upper side of the body. This JR has a wide distribution range, including all of the Southwestern US, east to Missouri, north to Nebraska and Washington and south into Mexico.


The other Arizona species is the Antelope Jackrabbit (Lepus alleni). I can't say that I have actually consciously seen them - I only became aware of their field marks while preparing this article. The antelope jackrabbit is one of the largest hares in North America, weighing 9 to 10 pounds (4.5 kg). This jackrabbit’s huge ears are edged in white. The large eyes are placed high and towards the back of its slightly flattened head, allowing it to see nearly 360 degrees as it watches for predators. The antelope jackrabbit is so named because it has a patch of white fur on its flanks that it can flash on one side or the other as it zigs and zags, running from a predator, much as the pronghorn antelope does. (Arizona-Sonora Desert Museum-http://www.desertmuseum.org/books/nhsd_rabbits.php)

According to literature, its prefered habitat is even dryer than that of the Black-tailed JR, which seems nearly impossible considering that we have Black-tails on our creosote flats. But its main distribution is more southern (Sonoran Desert in AZ and the western states of Mexico)  and it can reportedly deal better with extreme heat (Best and Henry, 1993).  It also prefers lower elevations than the Black-tailed, and  grassland to brush.

So which jackrabbit flashed its white flanks? During my internet search for an image of the White-sided, I repeatedly found a misidentified Antelope JR, with white flanks, but clearly lacking the black on the inside of the ear tips. The San Rafael Valley is still rich in endigenous grasses that L. callotis likes, but the Canelo Hills location may be to high in elevation for the species. The photo by A. Schmierer, above, cleraly shows an Antelope JR, and it was taken in the Patagonia area which isn't far from the Canelo Hills. The White-sided JR is crepuscular to night-active. We saw the pair during the bright afternoon (but mating activity may disturb the pattern?) and the single one at dusk. We did see the flashing white flanks, but I paid no attention to the ears. So if Eric doesn't find his photos and they clearly show black ear tips, I think we will never know whether those were Antelope or White-sided Jackrabbits, but I now assume they were the former.

Anyway, I think they are all amazing desert creatures, adapted to some of the most inhospitable habitats and chased and hunted by everyone from Golden Eagles and other raptors to felines, canines and humans, but still jumping, cavorting and playing.


I found this in the AZ Star this morning and just couldn't help it, it just had to go on this blog:

Posted by Margarethe Brummermann at 3:35 PM