Color variations of the caterpillar of the White-lined Sphinx, Hyles lineata

In the summer of 2007 I witnessed mass migrations of caterpillars everywhere in Saguaro National Park West and Tucson Mountain Park. These cats were obviously sphingid larvae, complete with the characteristic horn on the hind end. But they came in many color variations and even the pattern varied between individuals. The reason behind the mass movement across paths and roads seemed to simply be that they had just devoured all herbaceous plants on their side of the road. I couldn't see any dominant direction. At the visitor center of SNPW I was shown a folder with images of local Moths that identified them as the larvae of the White-lined Sphinx.

At the time I was a very active member of the Arizona Star gallery for local photographers. For the next couple of years I noticed probably more submissions of images of the adult White-lined Sphinx than of any other butterfly or moth. When our friend Ingrid Schmidt from Germany spent a couple of weeks photographing our Tucson backyard fauna, we realized that we both knew the species from warm, sunny areas at the Mediterranean and even from southern Germany.

In fact, Hyles lineata (synonym Celerio lineata) ranges from Central America north through Mexico and the West Indies to most of the United States and southern Canada and also occurs in Eurasia and Africa. I think genetic studies may have to reveal whether all those populations are really in genetic exchange or whether separate species are forming.
Breeding twice annually between February and November Hyles lineata populations seem to go through cycles of population buildups and some sources assume that those trigger emigration and colonization of  more northern areas.
As caterpillars they consume a very wide variety of food plants from willow weed (Epilobium), four o'clock (Mirabilis), apple (Malus), evening primrose (Oenothera), elm (Ulmus), grape (Vitis), tomato (Lycopersicon), purslane (Portulaca), and Fuschia, also Rumex and Galium in Europe.

As adults they can be seen nectaring day and night on all kinds of deep-throated flowers. So they are able to adapt to many different habitats.

While I witnessed the fist population explosion in the lower Sonoran Desert in 2007, I ran into another one in the mile-high town of Prescott (September of 2008) where they seemed to concentrate in riparian ares and the adults were so frequently seen on Saponaria  that some of my art show clients took me to see and identify them.

In August of 2009 Fred Skillman and I black-lighted north of Silver City New Mexico close to some meadows covered in Spotted Horsemint (Monarda punctata), and our black-lighting sheets were weight down by the on-slough of White-lined Sphinxes.

But here in the desert around Tucson, the moths had become much rarer after several years of severe drought. I never see them anymore during the day on our Barrio Petunias that they used to love. But after somewhat better monsoon rains I did see more caterpillars on desert herbs.

Last week, Lois O'Brien called me to  Green Valley to photograph caterpillars on her Mexican Prim Roses. She had a good number in her front yard and was fascinated by the extreme differences in their appearance. They ranged from bright juicy greens to nearly black, some had light median back stripes, others didn't, and there didn't seem to be any correlation between their size (age, instar) and those colors.  From the distribution of the caterpillars among the plants, we couldn't help but speculate that all these caterpillars came from a clutch of eggs from a single female.

When I came home, I went through my files and pulled out even more color variants. I came upon bright yellow ones with red markings from Tucson Mountain Park and dark and even blue and purple ones from Prescott. So is that a hint? Light colors on the sandy desert and darker ones in moister or colder environments? Thermoregulation? There seem to be some studies that support this theory. 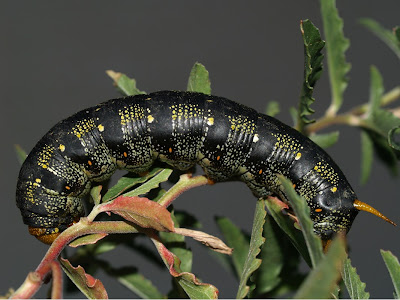 In Lois' garden we noticed how difficult it was to find the big caterpillars in the flower beds. The dark colors were certainly very cryptic between the branches of the lush green plants while the bright green blended in with leaves in the sun. The great differences in appearance made it quite difficult to form a search image. Did you notice the smaller lime green caterpillar in the photo with the big yellow one? I should mention here that the colors do not seem to be aposematic. I had a young Jackdaw at home in Germany who seemed to like the caterpillars on his menu, and here in Tucson I watched even the notoriously seed-eating Northern Cardinal devouring every bit of a very fat one, which took several minutes and a couple of location changes to get away from Desert Museum visitors. I also remember a side-blotched lizard grabbing several small ones. So they are tasty.

Considering the wide range of different habitats and the tendency of the adults to wander, isn't it possible that all the different patterns and colors occur randomly in the population or even a clutch (and I have no idea about the possible genetic base for this), and just a few will always get lucky and find camouflage and protection? The reason that I found more yellow ones in desert grasses and more dark ones in lusher, shadier places could just be the result of higher predation of the other colors.  In this scenario there would be selection, but no evolution in any direction, because the next generation may be growing up in a completely different habitat. During mass occurrences, the lack of a unified search image may make it more difficult for predators 'to get them all'.  I for example keep overlooking some color morphs in my own photos.

Posted by Margarethe Brummermann at 5:13 PM