Brown Canyon is part of the Buenos Aires National Wildlife Refuge (of Arizona, not Argentina) It is close to Baboquivari, the sacred mountain of the Tohono O'odham. Access is limited to small guided tours. As a volunteer guide for the Tucson Audubon Society, I offered a Brown Canyon tour to witness the last peak of Arizona insect populations for the year 2012. 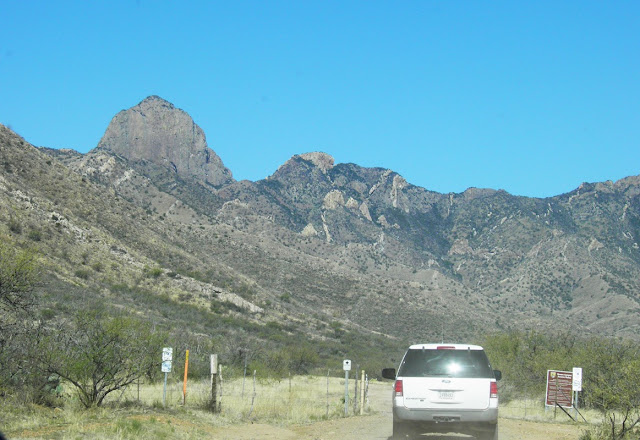 The recent rains had washed ruts into the road, so we had to use high clearance vehicles. Just a week before the overgrown catclaws and wait-a-minute bushes had been cleared off the paths by the fire department. It was so much greener than during my last visit in April! The creek was running and there were a few standing pools.

﻿﻿﻿
We had hoped for many Dragonflies but only a few Filligree and Flame Skimmers were cruizing along the creek. I did get my first Filigree shot where the wing and eye pattern actually show up in front of the background.
The diversity and abundance of butterflies made up for that lack of dragons. Puddle parties like this one form when males land in the mud to collect minerals that they need to be fit for sex. If a few are sitting others will join as experiments with dummies showed. We found mostly species of pieridae in those groups (Tailed and Sleepy Orange, Mexican Yellow, Sulphur sp.).


As usual, territorial Empress Leilia  were defending little stretches of the path, but surprisingly there were also Hackberry Emperors basking on the rocky ground. Both their caterpillars feed on different species of Hackberry bushes.
Immaculate fresh Gulf Fritillaries and Variegated Fritillaries indicated that their food plant, probably Passion Vine, was aso close by.

We found a Variegated Fritillary Caterpillar on Cucumber (Marah gilensis). Does it actually feed on it? It was fully grown, probably ready to pupate, a state when caterpillars may wander off their host plants.

Tiny Checkerspots danced around in abundance,  also several of the similarly sized Elfs that I had never seen before, but that are reported from all over SE Arizona this year. The foodplant is unknown and my Kaufman field guide doesn't even show a distribution map. Another Mexican alien!

A couple of weeks ago Bordered Patches made up the majority of butterflies in many SE Arizona locations. This time we didn't see many adults, but clumps of their caterpillars on asteracean leaves. 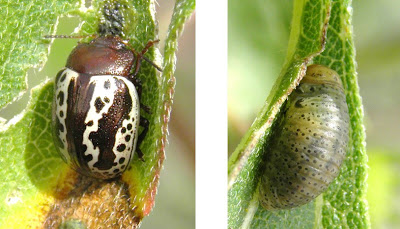 Larvae and fresh adults of the leaf beetle Zygogramma arizonica shared the same plants. (Stick Seed?). Every species of Asteracea seems to have its own distinct Zygogramma species, that appears only during a specific window of the plants annual life cycle, usually just before flower buds are formed. By now I can go through my files and very reliably predict where and when to find the more common Arizona species.

﻿
Red-winged Arphia stood out visually and acoustically - I wished I could record their flashing, noisy display flights. But on the ground, and in photos, they are just drab black-brown. I saw an interesting color variant with a cream colored pronotum but it escaped under a cat-claw acacia.

Many Soldier Beetles were visiting composit flowers. I watched at least 5 species feeding on pollen and finding mating partners.

With so many bugs, predators are never far behind: there were three kinds of Mantids: Big pregnant female Stagmomantis limbata whose brown oothekas will hang in the branches of trees and bushes until hundreds of youngsters emerge next spring. Nearly invisible ground mantids slipping around among the grasses, and higher up on flowers the equally small Yersin's Ground  Mantis with its diabolical face. This one was a first for me!

Brightly colored big Jumping Spiders, a Green Lynx with egg sack, a still unidentified Orbweaver and well-camouflaged crab spiders were competing with the mantids. A Tarantula stalked elegantly over grasses and around human feet (click to see the video).

Rich insect-life surprised me on Wild Cotton plants. The bugs were chewing  through the skin of fresh green bolls and licking the sweet juices. This was the same community that I usually expect on the sap-leaking branches of Deser Broom: Wasps, Scarabs, the fulgorid Poblicia, Long-horned beetles, Flee Beetles, Leaf-footed and Shield Bugs....

The most common paper wasps had a bold imitator: a wasp-mantisfly, a stingless predator in the netwing family (Neuroptera). The larvae  are parasitoids of spiders.

Some beetles were mating on the cotton plant: our native boll-weevil Anthonomus grandis thurberiae whose larvae will develop in  cotton bolls, but only in those of the wild species, and Wedge-shaped Beetles Toposcopus wrightii whose larvae will probably grow up as brood parasites of hymenoptera.


Reptiles were still active as well. Many juvenile lizards were working on their fat reserves for the winter. Close to the creek I watched a Sonoran Whip Snake disappear too quickly to alert the group. Doug Evans was the only one lucky (or quiet) enough to get to see a Green Ratsnake. 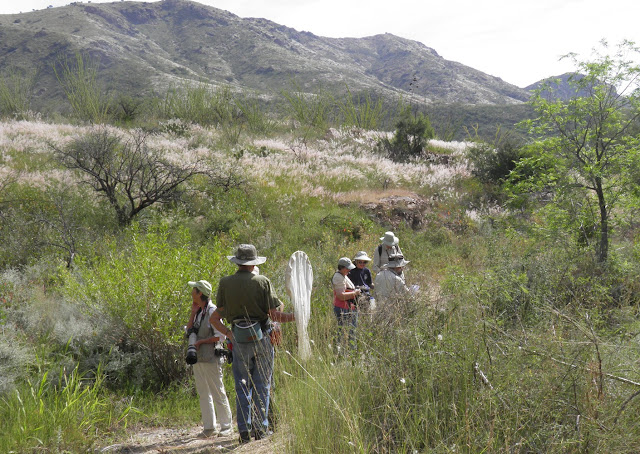 Ours was the best group I could have hoped for for this special adventure. Everyone who signed up was a naturalist and photographer with a lot of expertise. Fred Heath, Doug Mullins, and Brian McKnight are butterfly experts, Doris and Doug Evans and Inda Gregonis are longtime ASDM docents and birders, Ned Harris leads Catalina Mts. trips for the Sabino Canyon Naturalists during the summer and is the best raptor photographer I know. Jean Thomas, the volunteer guide of the Buenos Aires Preserve and keeper of the access code was our gracious and understanding chaperone. Thanks everyone!

Posted by Margarethe Brummermann at 4:59 PM