I have lapped filthy water from a hoof print

"I have lapped filthy water from a hoof print and was glad to have it."
"If I ever meet one of you Texas waddies who says he had never drank water out of a horse track I think I'll shake his hand, give him a Daniel Webster cigar."
In Charles Portis' True Grit the Texas Ranger LaBoeuf tries (and fails) to impress U.S. marshall Rooster Cogburn.

In the real West in Arizona, the filthy water of a hoof print could well be your amniotic fluid, cradle, bathwater, and hunting ground -- if you are a young Couch's Spadefoot.

On July 29th a huge thunderstorm rolled over our land and brought nearly three inches of rain in one hour. It poured down so hard that most of the water just raced down hill, carving out old arroyos, piling up new sand dunes, and slicing through flat areas to form new washes. For a couple of hours the sound of rushing water swallowed everything else.

As soon as that din calmed down, a faint bleating like from a herd of sheep lost in the dark could be heard. The mating concert of Couch's Spadefoots.

Spadefoots are also called toad-like frogs (Pelobatidae). While their shape is toad-like (short-legged, squat, with a bluntly rounded snout) their skin is smooth like a frogs and they lack the obvious paratoid glands of the Bufonids (most of our toads). But their vertical pupils and the spade-like tubercle on the underside of each hind foot set them apart from both frogs and toads. If you set a spadefoot on loose substrate you can watch how quickly he disappears backwards by shuffling those hind feet. These amphibians hold endurance records: they can stay under ground for years during droughts, nearly dried up and motionless in a little chamber plastered with their own skin excretions.

Drumming raindrops of a substantial monsoon storm get the Spadefoots up and ready to find temporary rain pools to mate and lay their eggs. Tadpoles can be found a day later, feeding on organic debris and quickly developing algae.

Today, on the 8th of August, all rain pools have disappeared. But every morning, depressions in the soil are still visibly moist.

Walking our dogs around sunrise, we found tiny spadefoots emerging from those muddy spots,  scrambling for cover under freshly green Triangular-leaf Burr Sage bushes. Most of the deeper mud spots were the hoof prints of our neighbors' rodeo horses. 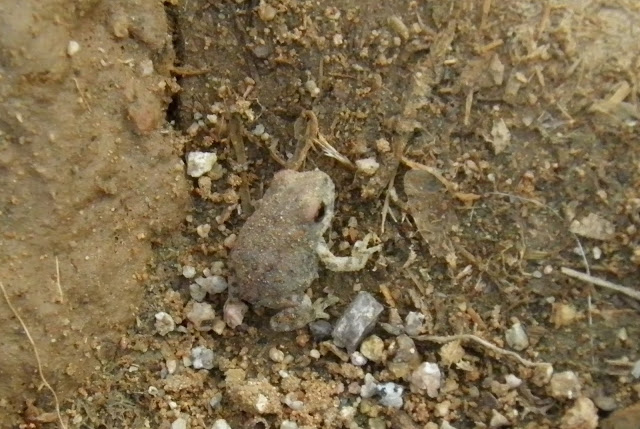 The little amphibians are still smaller than grasshoppers, not much more than a quarter inch. They are able to absorb moisture through their skin, but they have to leave the exposed muddy tracks before the morning sun reaches them. 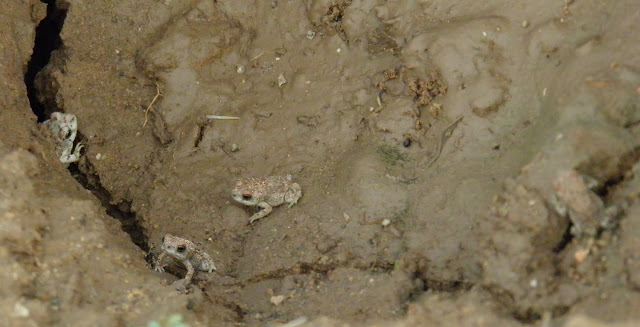 Some will try to risk the heat of the day in the cracks that open up as the mud in the hoof impression dries. I hope they make it!


When I went through this morning's photos, I realized that some of the larger anuran kids seemed to have horizontal pupils and looked rather toad-like. These are young Red-spotted Toads.

They supposedly need more permanent creeks and pools for breeding, but the adults are around, and those rainwater pools are all our desert here has to offer. I may  have even heard their monotonously trilling mating call and mistaken it for the purring of some of the local Night Hawks.