Black Lights to draw Moths and the Public

Since the beginning of August I have been quite busy. After those heavy monsoon rains there were a lot of insects to photograph and collect and in addition I had gave an insect themed power point presentation at South West Wings in Sierra Vista, combined with a black-lighting field trip to Ramsey Canyon.

Last Thursday I was leading an Audubon field trip to Peppersauce Canyon on the north side of the Catalina Mountains. We had a nice list of sign-ups through Audubon, Flickr and facebook.  The local newspaper, the Arizona Star, surprisingly sent a photographer, and local author and moth expert Mike Wilson joined us in the canyon where he and Doug Mullins were collecting caterpillars. 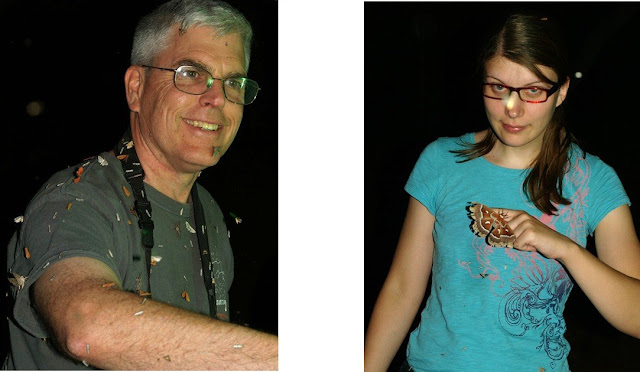 Fellow BugGuide Member Patrick Coin from Durham, NC, was staying in Tucson and took the opportunity to see more of the local fauna.  Muriel Béchu, a young German Scientist at the U of A College of Optics came to see the structural prismatic colors of moths in real life. She stayed to the very end at around 11 pm and actually discovered the prize of the night, the beautiful Northern Giant Flag Moth (She posed with Glover's Silk Moth)

The beauty of Chrysina gloriosa, the Glorious Jewel Scarab made up for the lack of  variety of beetle species. Either the drought of the last years is taking its toll or the Mercury Vapor light that I am using now is more appealing to moths than to beetles.

We got scores of Rhinoceros Beetles walking all around us, two Dynastes grantii and one Strategus aloeus. The last three were females, I'm showing the males above.

Very special to me were the Giant Tigerbeetle and the Tomato-red Potato Beetle. We also had smaller tigerbeetles, fungus and darkling beetles, and several scarabs. Please refer to my flickr gallery for picture of those species. 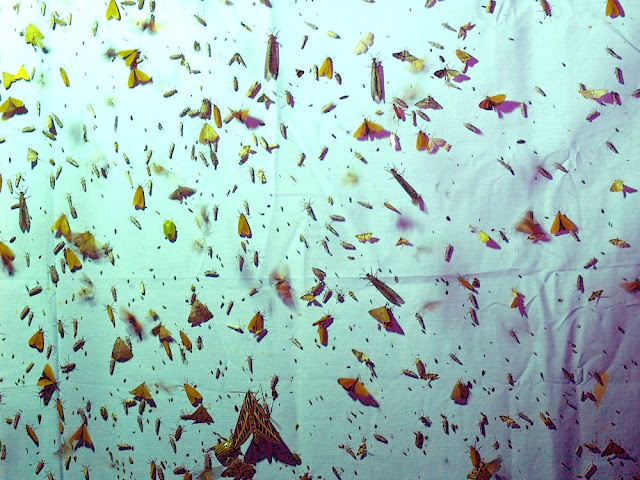 After a couple of hours, our two sheets were so covered in moths, that it took a lot of enthusiasm to get close to them. 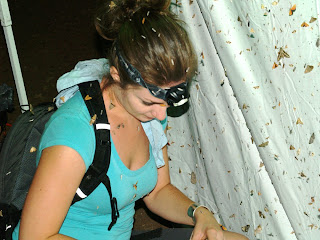 Kerrah Cutter was especially undeterred: decorated with moths all over she took a great series of photos to post on her facebook page. I'm sure we will meet again in the field to have some more interesting adventures with bugs and herps.  My friends Collins Cochran, Doug Mullins and Carol Tepper saved the night by keeping my new generator running and helping with set-up and take-down. Hanging the sheets from an easy-up tent frame and using three lights driven by a generator is too involved an undertaking do manage by myself, especially in a hurry with lots of people around who expect to hear me say something interesting while waiting for the slowly arriving bugs just after sunset. 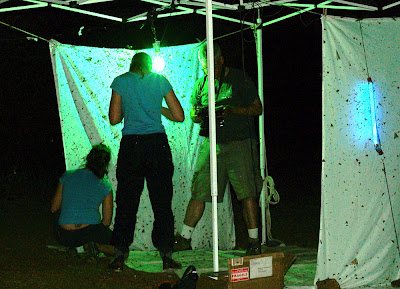 I hope everybody enjoyed the trip and saw something interesting and new. I haven't had time to do a species count, but Patrick, who is a founding member of BugGuide and has a lot of experience from other parts of the world, was very impressed with the diversity of insects.

We were speculating why Arizona is ranked so very highly among all US states, and bordering Sonora, Mexico is even one of the locations with the highest species diversity world wide. There are many reasons:

1.The geological history here has been quite dramatic, so we are living on a mosaic of many different soil types, and hence among a patchwork of vegetation types, providing hosts for many different insect species.
2.Our sky islands rise from the surrounding desert high enough to provide along their slopes everything from lowland sandy desert to pine forest and tundra like bare mountain tops at over 10,000 feet.
3.Our two rainy seasons and high temperatures give us growing conditions for different organisms all year round.
4. We are at the border between temperate zones and the tropics.
5. We are experiencing a phase of climate changes that cause the spread of Mexican species into Arizona and may lead to the extinction of some long-term residents. The species distribution along the elevation levels of the mountains is most likely going to shift with rising temperatures and prolonged droughts.

I have collected images of most species that we saw last Thursday in Peppersauce Canyon in a flickr file. I will add additional identifications over the next week.

Posted by Margarethe Brummermann at 11:02 AM