Of Migrants, Aliens and Mutants

A disclaimer first:  Being part of at least two of the above categories, at the Gilbert Water Ranch, in the heart of Sheriff Arpaio' s Maricopa County territory, I made sure to carry my green-card while bird watching. 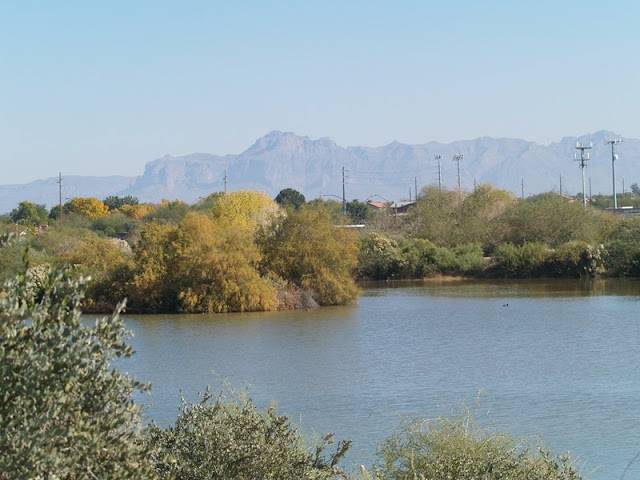 In Gilbert, 110 acres with seven large shallow basins that are used to recharge the water table with processed waste water. The eighth pond is stocked for fishing. Waste water there, too? For most visitors, wintering migratory waterbirds are the main attraction of this urban wetland.

From Bob Beatson I finally learned field-marks to differentiate between Ringnecked Ducks (rings around the beak and a white shoulder spur) that were in the majority and Lesser Scoups (above, right). The female on the left was one of several with an unusual amount of white around the beak...leucistic? Nothing special  - as Bob remarked, if it were a displaced Scooter, there would be birders lined up all along the shore....

Elegant Northern Pintails were drifting among hundreds of Long-billed Dowitchers and a few Yellow Legs. Surprise: the total absence of Northern Shovelers. They must ALL be at Sweetwater in Tucson.  American Avocets (above right with Black-necked Stilt) were still in their pale Winter plumage without any salmon blush of neck and head.
We saw an impressive phalanx half of Canada and half of Snow Geese overhead. No camera was ready.

A Snowy Egret danced and fluttered, fishing busily next to a pair of Pied-billed Grebes. Quite in contrast a Green Heron moved in on the same great fishing spot in absolute slow motion. Fishing must have been good: A Kingfisher rested satisfied and a male Osprey carried a huge fish around a female who very slowly followed him. 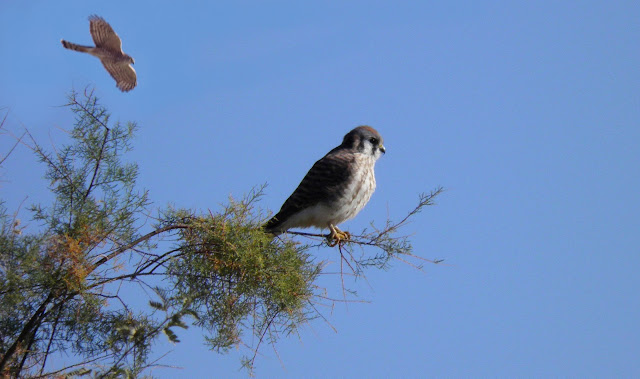 We watched a dispute between a Sharp-shinned Hawk and a female Kestrel. For a while he kept harassing her on her tamarisk perch. She flew up and hovered, trying to ignore him and hunt. He mobbed her in the air, then treed in a mesquite. A little later she landed there as well, then the whole tree rustled when she went after him and attacked. Finally, the Sharp-shin cleared out. Interesting: two raptors that probably go after similar prey fighting over territory?

So what about those Peach-faced Lovebirds (Agapornis roseicollis, Psittacidae)? Would Bob count those? An established colony of those cute little 'mini-parrots' lives at the preserve. They are the feral descendants of escaped pets that feel very much at home in Gilbert because they are native to southwest Africa, (Namib Desert and southwest Angola) where they inhabit dry areas with shrubs or trees, usually near bodies of water.
We found several pairs in a big umbrella shaped Chilean Mesquite, preening each other and cuddling. They are just too charming to ignore, even if they are as much an invasive species as the European Starlings. We ended up spending more time watching them then some of the natives.

And, at the end, another water Ranch specialty of the year, a leucistic Say's Phoebe. This one isn't all light colored but pied in a way that looks nearly like a regular pattern. I am glad that another birder had told us about it or I would have searched the field guide for some interesting immigrant from Mexico.

I am aware of several cases of leucism  in flycatchers from waste water recharge areas. I hope that this isn't the result of an accumulation of harmful, mutation generating substances in these birds that probably feed on insects with aquatic larvae. Most leucistic birds seem healthy enough to produce and raise offspring, which in most cases turns out phenotypically normal.
Posted by Margarethe Brummermann at 6:46 PM