More bug life from the Santa Cruz River in December

Even December, fresh green leaves of the willows along the Santa Cruz river support several species of leaf beetles. Here is a single freshly eclosed Chrysomela sonorae. I have found this species only once before in the Patagonia Creek Preserve, in late October.
Plagiodera arizonae can be found in great numbers on Willows all over Arizona, and I have seen all stages of development, as shown above, in early April, in August, and in December. So it seems to reproduce  year round in several generations. If you look closely at the third picture, you can see that only one layer of the leaf was eaten not all the material between the leaf-veins as a skeletonizing leaf beetle (Subfamily Galerucinae) would do. Plagiodera belongs to the subfamily Chrysomelinae.
In the same habitat, groups of many tiny Lexiphanes guerni are hiding in the young tips of Seep Willows Baccharis salicifolia. At least on other species of this genus can be found along the river closer to the Mexican border.
Burrowbrush Hymenoclea monogyra accompanies the sandy banks of the river all the way from Marana in Pima County to the Mexican Border and beyond. It feeds adults and larvae of another specialized leaf beetle Leptinotarsa lineolata. This late in the season, however, there were only a few big weevils of the species Apleurus saginatus. The adult weevils can be found mating on this plant from Semtember to December.
On another willow, a stinkbug and a heard of aphids were utilizing the juices of the plant while a whole army of predators was waiting its chance to sneak up on the vegetarians. There were spiders of several different families (above) 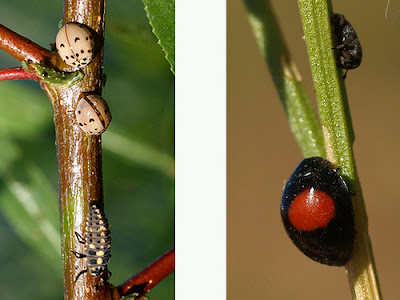 and of course ladybugs, here represented by larvae and adults of Ashy-gray Ladybugs (left) and our most common black-with-red-spots Chilocorus cacti.
Posted by Margarethe Brummermann at 11:54 AM