Sisenes championi at Carr Canyon in the Huachuca Mountains 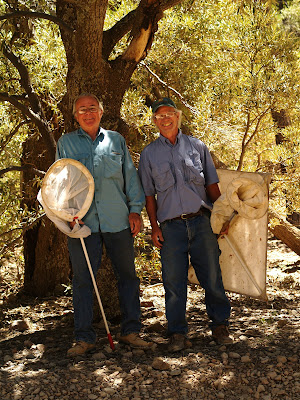 Last weekend a naturalist friend spotted a red elongated beetle with long antennae on the Wait-a-minute bushes in Carr Canyon. On Tuesday Patrick Sullivan (left) invited Fred Skillman (right) and me to join him on an expedition to find it again - Fred as a Cerambycid specialist and me as a photographer because we thought it might be Elytroleptus rufipennis, a predatory Long-horned Beetle, Cerambycid. 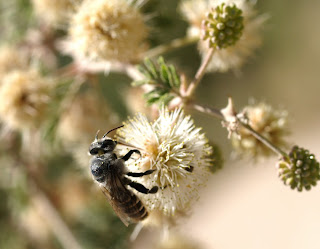 Wait-a-minute Bush, Mimosa biuncifera, grows along the lower canyon for at least half a mile. First, we found very few insects at all, just some bees and cryptocephaline leave beetles of the Clytrini tribe. I think these Mimosas rely mainly on wind pollination. When I was beating for beetles, clouds of pollen rose into my nose, mixed with dust from the dirt road. After our nice rainy spring Arizona is getting tinderbox-dry very quickly again. 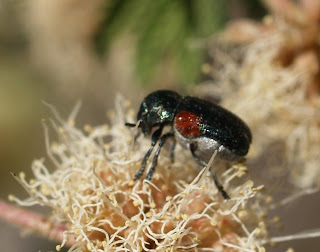 Further up the canyon the Mimosa flowers looked fresher and there were more insects. Of course, it was also getting 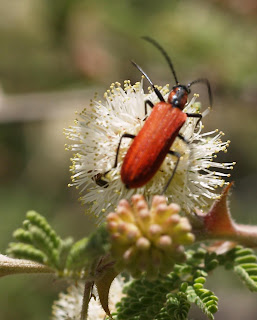 later in the day and warmer.


Fred found the first of the beetles and minutes later Pat had a couple as well. They fit the description we had, but they were no Cerambycids. They looked and behaved like Lycids, but the pronotum was too narrow and the elytra had no net-like texture. 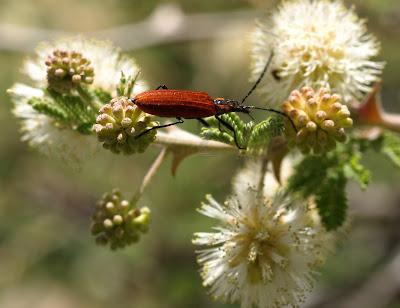 Finally, Pat identified them as Oedemeridae. While that family bears the English name False Blister Beetles, in German they are Scheinbockkaefer, which translates into False Long-horned Beetle. I don't know whether that information would have cheered up Fred who was looking for 'Bycids'. 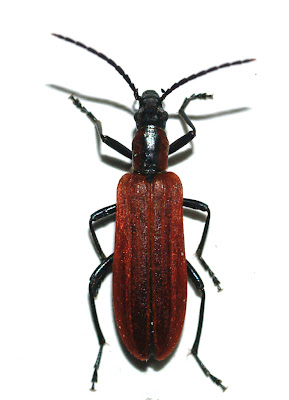 Thanks to Vassili Belov on Bug guide we found out that we had Sisenes championi Horn 1894. It is an Arizona specialty that occurs nowhere else in the US. Vassili of the Bug guide and Carl Olson of the University of Arizona both call it 'a very good bug'. So it is quite exciting. I'm also glad to finally have one clearly identified Arizona Oedemerid for my digital collection. My records of that family so far consisted of more than half a dozen unidentified species mostly in the genus Oxacis. 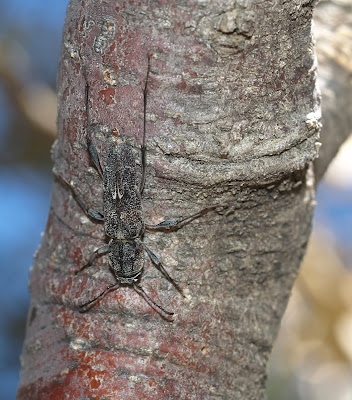 At Carr Canyon, we continued to the top parking area where Fred proved his incredible eye for bycids by spotting several Neoclytus irroratus on some freshly dead branches of white-leaf oak. They were extremely cryptic when sitting still. When moving, their long legs and short antennae and make them look very much like wasps. I had one in my beating sheet at Mount Lemmon last week and it nearly fooled me.

From the very arid highpoint of the canyon, where only White-leaf Oak and Manzanita grow, we descended into the lush and varied vegetation the along the creek. 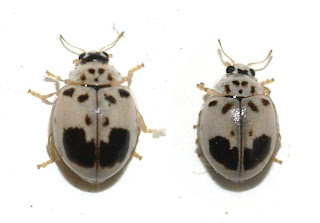 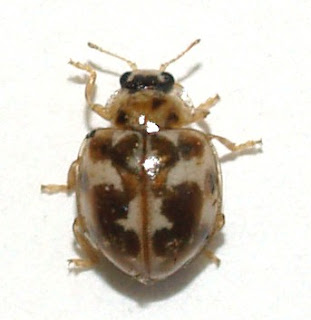 There were dozens of the little Psyllobora vigintimaculata. I had been looking forward to photographing them on this trip (left).
I still needed this more common species after I found the rarer Psyllobra plagiata (right) at Molino Basin in the Catalinas this spring.

On low growing oaks I found a Hispine Beetle that turned out to be Baliosus ferrugineus, a species described by C. L. Staines in 1996 with a Holotype from neighboring Miller Canyon. 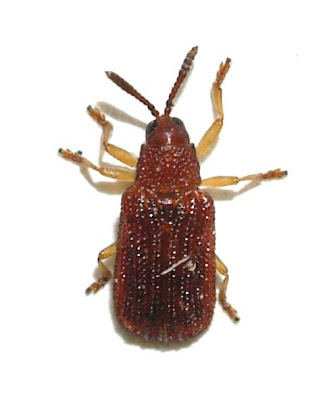 There had been bear sightings on our trail last weekend, and I swear Pat and I heard the voice of at least one bear in the underbrush. But Fred was out on his own at the time, so who knows what we heard. 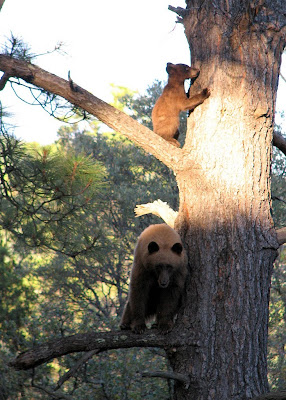 Here's what we missed by staring only on the ground, looking for beetles. My friend Tommy Peck took this picture last year at the same location.


Thanks to Pat and Fred for inviting me to a very memorable and fun trip, even without any bear sightings.

Posted by Margarethe Brummermann at 1:46 AM