Cowbirds chicks and their foster parents

Since early March we've been hearing the flowing silvery song of Cowbirds in our backyard in the Tucson Mountains. We have two species here. The Brown-headed Cowbird has increased its breeding range from the Grasslands of middle North America to include now most of the US and Canada. The Bronzed Cowbird reaches us from its main distribution in Central America. 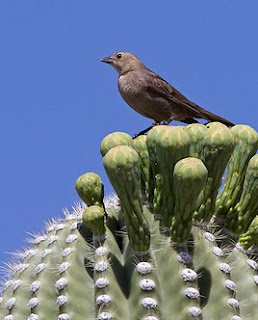 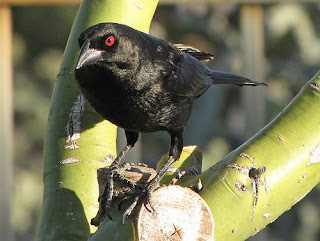 Both species are brood parasites. Females lay their eggs in the nests of other species and leave it to the foster parents to raise the brood. Thus saving a lot of energy, female Brown-headed Cowbirds can lay more than three dozens eggs per summer. The nestlings hatch early and grow fast, so they have a competitive advantage over their nest mates and are usually the only ones to survive. Though foster species have some strategies to get rid of these brood parasites, they mostly just get conned into caring for the impostor.

Birds, like most animals (and humans for that matter) are programmed to react to certain signals with fixed behavioral patterns. Most of these signal are early evolutionary developments and therefore shared by many related species. Famous is the 'Kindchenschema' (big round forehead, big, wides-paced eyes, closely arranged features) that evokes maternal behavior across species lines in a wide variety of mammals. As kitschy dolls, Chihuahua dogs, and many cartoon characters demonstrate, these imprinted signals can be exaggerated to become even more effective, even to the point of corrupting the originally survival-based instinct. 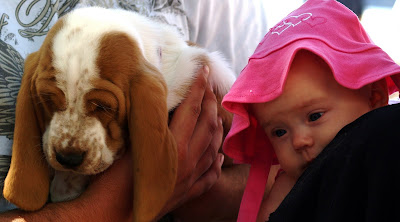 'Kindchenschema'
The following anecdote illustrates this point. Last year I observed a cowbird chick following around after a female Hooded Oriole. The foster mother couldn't provide fast enough, the father seemed to be just watching, and she decided to feed the chick at one of our bird feeding stations (hummingbird feeders, fruit, water, and a quail block). 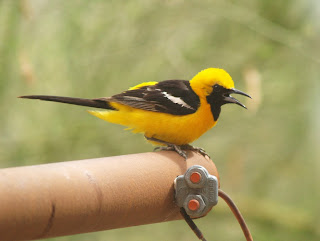 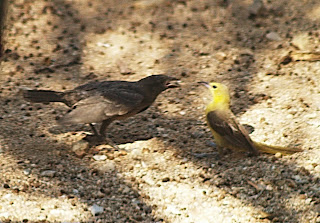 There the chick got in the way of a hungry Curved-billed Thrasher. Thrashers are among the most aggressive visitors, even picking and winning fights with big Gilded Flickers (below) and White-winged Doves. 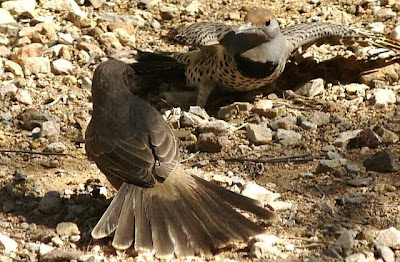 The Thrasher aggressively started towards the chick to chase it away. The chick hunkered down, flared its stubby wings, opened the huge yellow-lined beak, chittered excitedly - it begged. The Thrasher hesitated, then approached as if to feed the chick, then just turned away. Not exactly feeding, definitely not chasing, obviously confused and disarmed. Normally, a bird only feeds chicks that hatched in its own nest and that it is bonded with. The ueber-chick had nearly succeeded in crossing this line. I assume that Cowbird chicks are equipped with exaggerated begging-attributes, both visual and behavioral that make them simply irresistible. 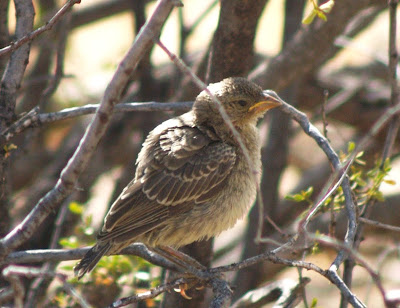 This year we are watching the plight of a very small, but extremely energetic pair of Black-tailed Gnat Catchers. Their cowbird chick is already twice their size but still much smaller than last years Oriole fosterling. This time the male seems to be the more devoted parent, or maybe he's less camera shy than the female. 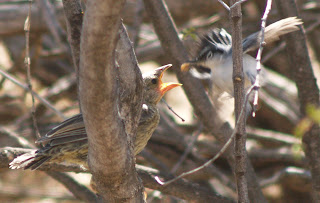 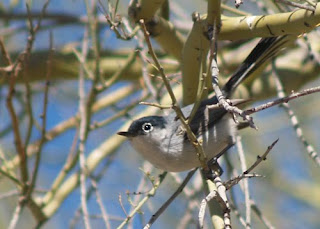 Individual Cowbird females seem to return to the host species that raised them. Some researchers believe that their eggs show similarities to those of the host. Last year, our Orioles were hit at least twice probably by the same female.
Now we have at least one new Cowbird lady around that likes Gnat Catchers. 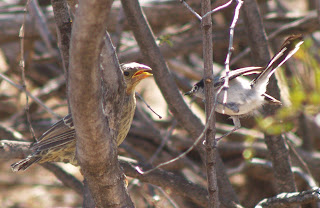 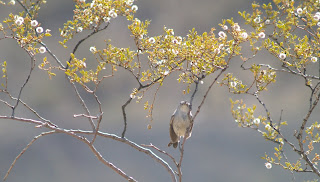 Even though the Gnat Catcher female spent a lot of time in Creosote bushes full of seed pods, I don't think she figured out that she could just stuff the chick with those. She kept looking for insects instead. Cowbird chicks seem to thrive on a lot of different diets. As adults they return to a fairly vegetarian life stile, similar to that of other related Blackbird species.

I was first introduced to the intriguing behavior of Cowbirds as a postdoc at the biology department of the University of Trondheim, Norway. Researchers Arne Mosknes and Eivin Roskaft had turned from their brood parasitism studies of European Cuckoos to the American example, the Cowbird. Cowbirds are far more common than the more solitary Cuckoos and Eivin and Arne got to do research in a far warmer climate.
Posted by Margarethe Brummermann at 2:25 PM