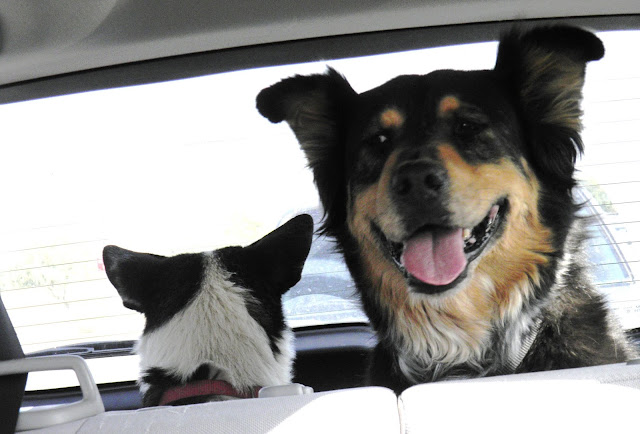 Wednesday morning: driving across town to join Debbie Bird and her Wednesday Walkers on Mount Lemmon at Turkey Run. Up there it's lush, green and so cool at above 8000 feet elevation while below the city sweltered under 106 degrees Fahrenheit

The drive through town took longer than expected, so we were late and nearly missed the sensation of the morning, a Rose-breasted Grossbeak. We got no photos, but I got a glimpse of this: the red breasted bird among the pink blooming Robinia. Striking!

Kira found everything scary and exciting. Either she had never seen tall trees, or she expected a bear behind every one of them. It made her edgy - she growled and barked at people and dogs. She has to learn that that's not like our dogs behave 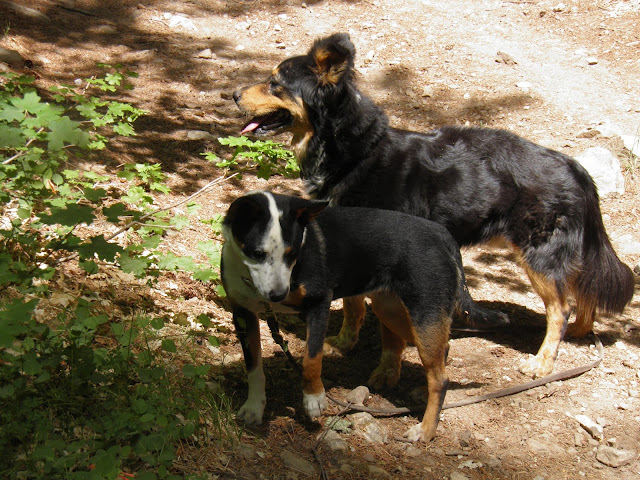 It was her first walk away from her new home and she soon took her clues from Mecki.  He took good  care of her. The two got to walk by themselves, leash-law obedient: leashed to each other. 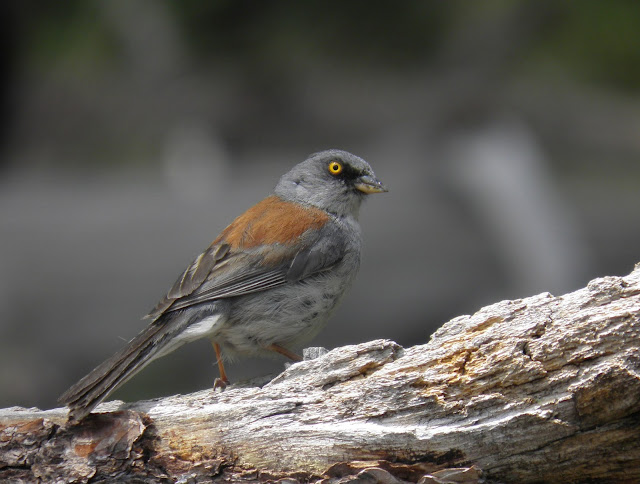 When I had to lead them, photographing birds became a challenge. I remember that for this yellow-eyed Junko, I was holding the dogs with one hand, the little point-and-shoot camera in the other, fully extended for maximum zoom. I think bird, wind, and dogs must have moved in exact unison for once. 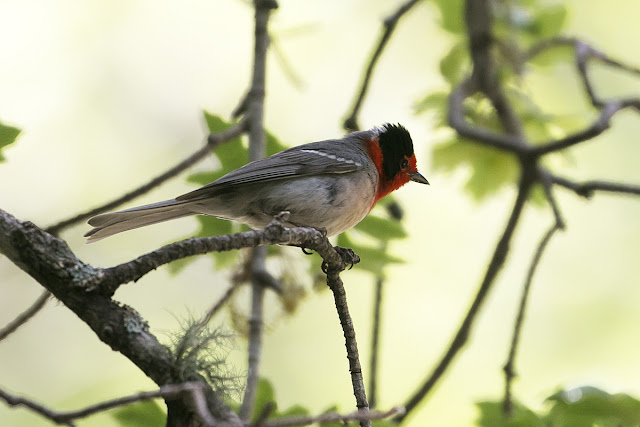 Bill Kaufman was so kind to send me some of his excellent shots. The Red-faced Warblers were very active - we first thought that they were slipping around on the ground with quivering wings to distract us from a nest, but later I saw several rather small individuals do it and now I believe that some of them might have been very young fledglings. 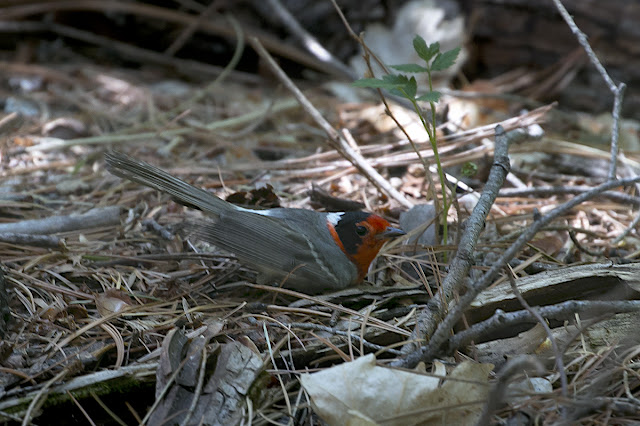 Solitary Thrushes were singing, Stellar's Jays shrieking, and Flickers were loudly claiming the tallest dead trees, while the Hairy Woodpecker whispered only quietly in the understory. 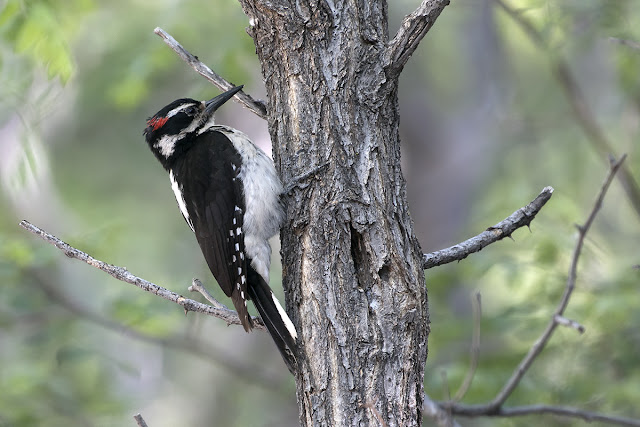 As usual, red Netwinged Beetles were flying or clinging to the young bracken fern leaves, sharing the undergrowth with the local Fireflies 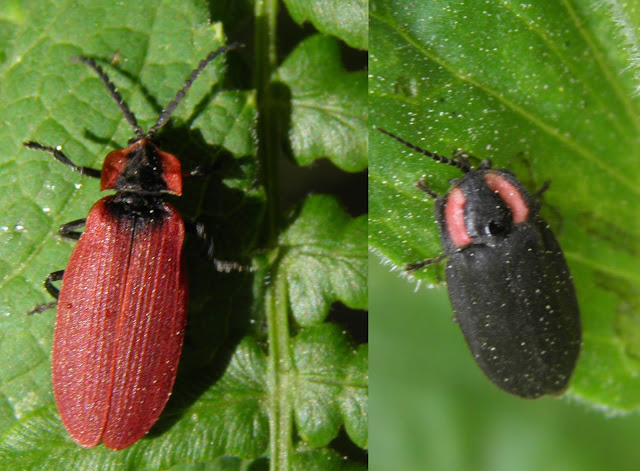 Sabino Creek is only a small trickle up here, but its moisture is responsible for  all the beauty around Turkey Run. 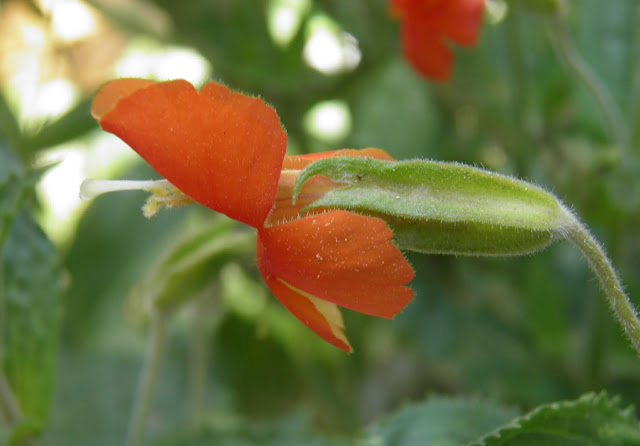 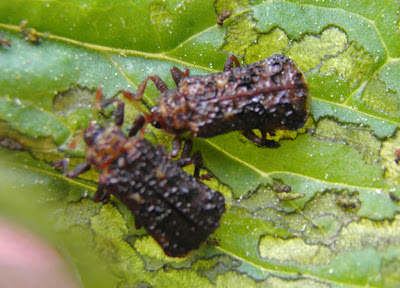 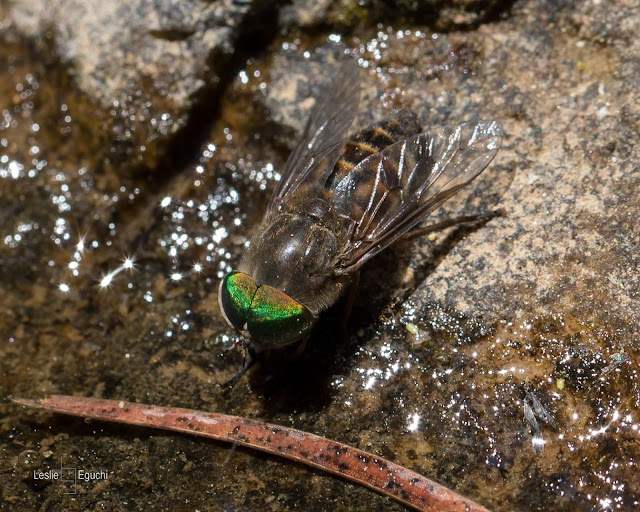 A beautiful green eyed monster also made use of the water: A tabanid fly in the genus Stonemyia. Beautiful shots by Leslie Brown Eguchi. 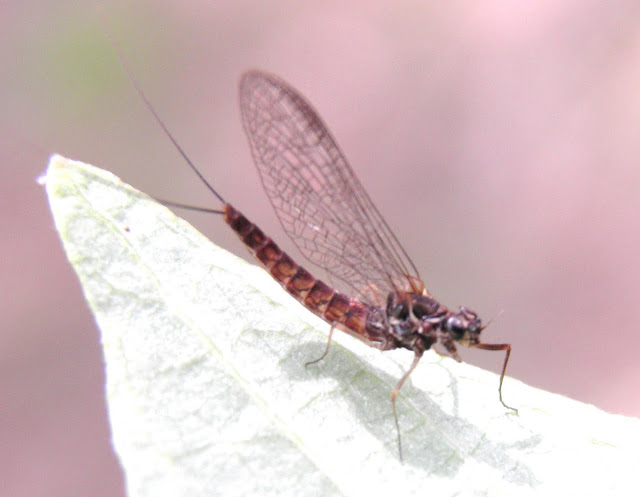 Ephemeroptera (Mayflies) are completely dependent on water, because they spend 98% of their live as nymphs and most nymphs develop in streams and rivers that are well-oxygenated and relatively free of pollution; Don't expect mass emergences from the creeks of the Catalinas, but you can always find a few.

Silver-spotted Skippers claimed territory along the creek, and a Satyr Comma landed a couple of times.

The creeks also nurture the huge leaves and flowers of Heracleum maximum, Horse Parsnip. The big umbels were in full bloom. There weren't as many insects on them as I would have expected, but still a great variety. 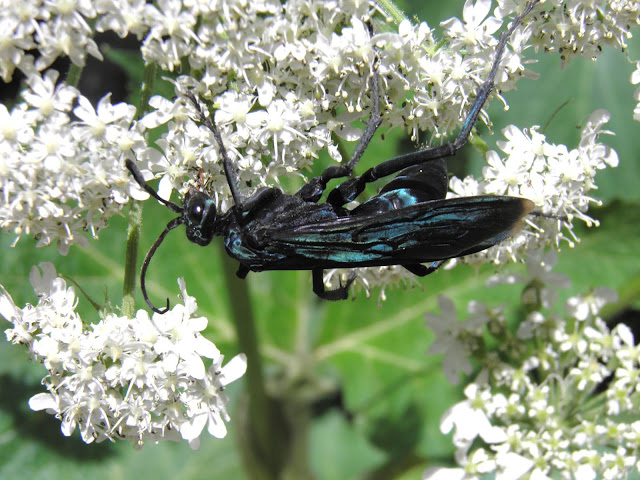 A huge iridescent blue female Pepsis grossa on Heracleum - do they lick nectar or also feed on pollen? Maybe my video will tell. Many flowers make nectar hard to get, which limits the pollinators to a faithful few that coevolved with the flowers to master deep throats or convoluted access, see the monkey flower for example. Parsnip, and the one blooming white rosaceae, New Mexico Rasberry, Rubus neomexicanus seem to follow a different 'strategy' they offer pollen to beetles and wasps, to flies and butterflies, all of them generalists. How do they ensure that their pollen reaches another flower of the same species? On Mount Lemmon the answer seemed obvious: those two were extremely dominant in certain areas. So nectar seekers were quite likely to return to flowers of the same species and become good pollinators, even though they are typical generalists. 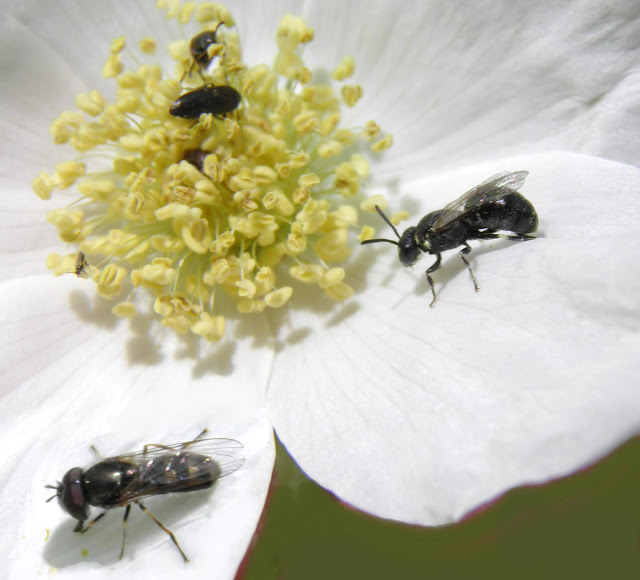 Fly, beetles, bee, and something too tiny for my camera on the left on Rubus

Of course there were a few other flowers, too. little Snow Berry flower bells were attractive to certain flies 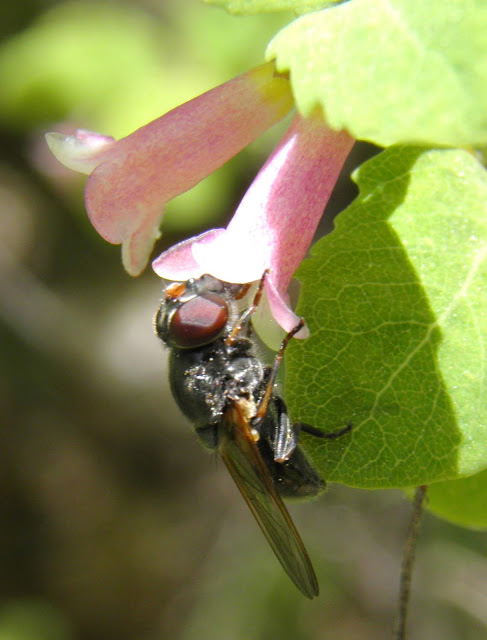 And Leslie climbed a slope under the pines to reach beautiful Shooting Stars - I've seen different species of these on high elevations and on poor, acidic soils in Swiss Alps before 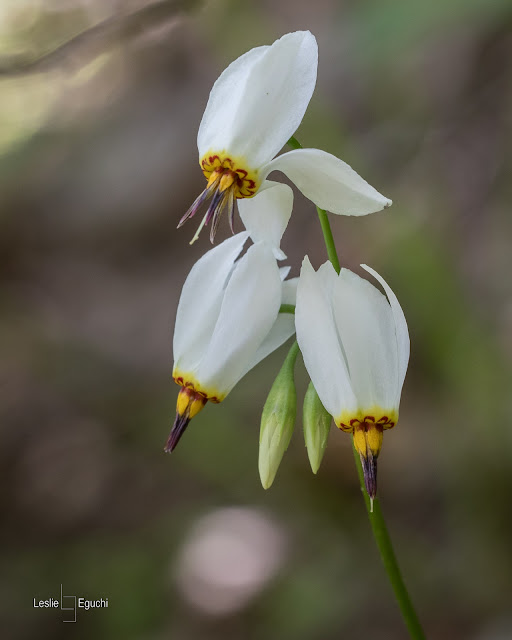 So between lovely temperatures, great birds, beautiful flowers, a few bugs and great company, this was another lovely Wednesday Walk! 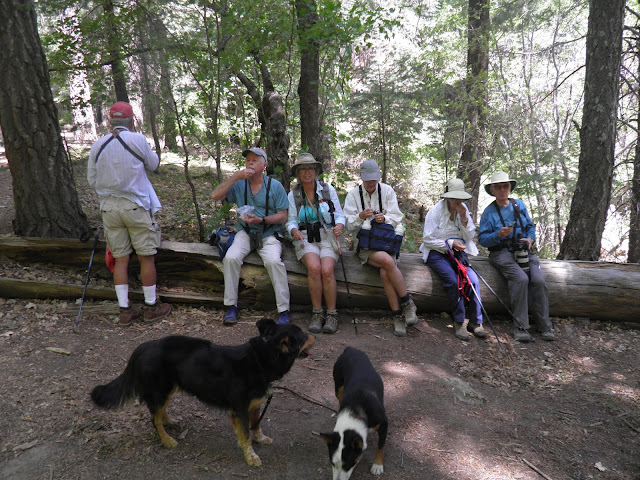 Posted by Margarethe Brummermann at 4:14 PM