In late November 2015, I found a nymph of Triatoma rubida marching across the bedroom carpet between two dog beds. My reaction was 'Oh, no, already'? and I caught it in a jar. It looked like it had just had a good meal.  Rather young, not much indication of wings yet. 4th instar? 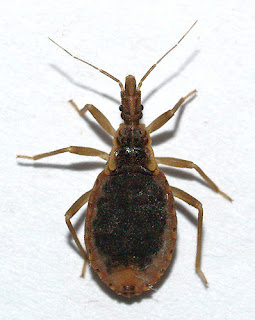 Planning to photograph it later, I kept it. By the end of February 2016 I marveled that it was alive and seemed to have progressed to the next instar, now showing stubby wing buds. 5th instar. 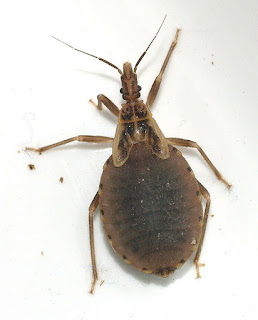 By the end of May, still the same. In early June, I found the first adults at my black light outside. When I checked on the captive, it also had gone through its last molt exactly on time. This time a complete exuvium was sitting next to him. You can clearly see the dorsal exit-slit, the  inverted tubes of the tracheae and the proboscis.
The emerged adult is not particularly big, but normal if it is a male. So these bugs probably don't get very many blood meals in nature either, at least not if the victim is a big, well fed, well hydrated dog. I must admit that these Kissing Bugs are not my favorites and get flushed down the toilet at times. But this brave tough guy gets to fend for himself outside now. At a record 109 degree Fahrenheit, he might have preferred the other choice.
Posted by Margarethe Brummermann at 3:26 PM