Since my last blog I took a great trip to the Californian Desert over Easter and there will be a write-up about that later. Since then I've been through one of the more difficult times I can remember and the last three days of trying to finish our taxes in time in spite of everything were the most easy and pleasant part.

But now I'm taking a deep breath, of course outside with dogs, looking at flowers, birds and bugs. It's early morning, and big Desert Iguanas are only half out of their burrows, basking and warming up their sluggish bodies. Their favored environmental temps are above those of Spiny, Side-blotched and Zebra-tail lizards.  Over the last 10 years, the numbers of the Iguanas seemed to go up while the others declined. 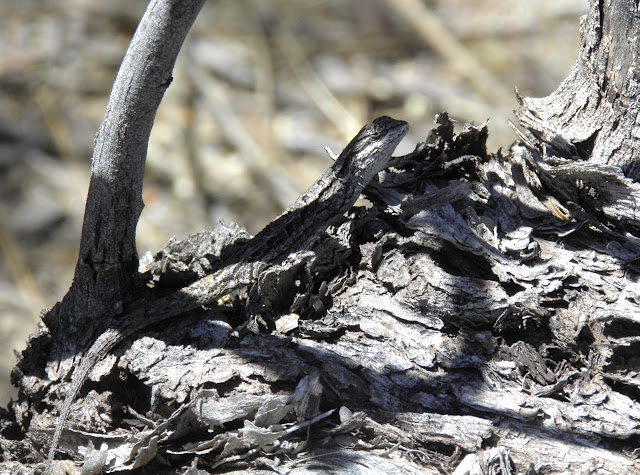 Ornate Tree Lizards also used to be much more common, but today I find one that is fascinated by a bunch of male Leaf-cutter Bees dancing around  a tree hole where virgin females must be ready to emerge.

Right at the border between our land and the State Trust Land, long before we have entered the usual sensitive area around the Red-tail nest, I hear the scream of the Dark Female. Above us rages an aerial battle. Both hawks and three Common Ravens, also residents that have been around for years, are dive bombing and chasing each other high above our heads. I can't tell if the ravens are closer to the camera than the hawks or if they are actually as big or bigger than even the female. At least the male hawk has shown up for this - I rarely get to see him.

By the time we reach the nesting saguaro, Dark Female has shaken the company and is screeching at me by herself, as usual. I have stayed at a save distance from the nest while she was sitting on eggs and small chicks, but now that she is usually up hunting I go close enough to finally get a glimpse. At least 2 chicks, already changing out of their fluffy down stage. 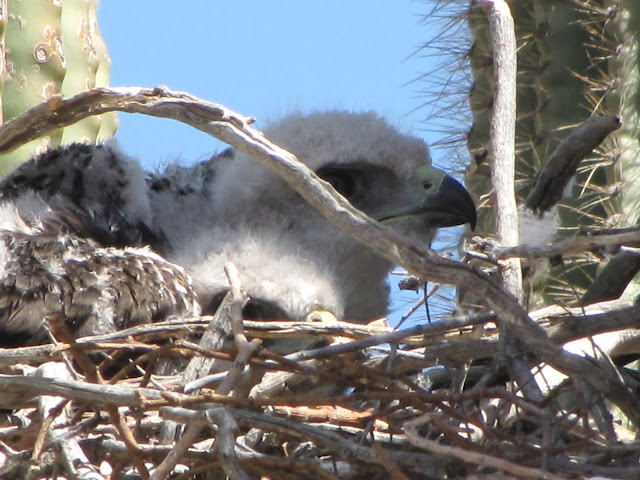 We are very lucky to have these hawks here: they have been using 2 nests in neighboring saguaros at least since 2010. The female is such a rare dark morph that she is easily and individually recognizable. She has raised 2 or three chicks to the fledgling stage every spring. For months afterwards we can even follow the young hawks around while their activity radius grows wider and wider. 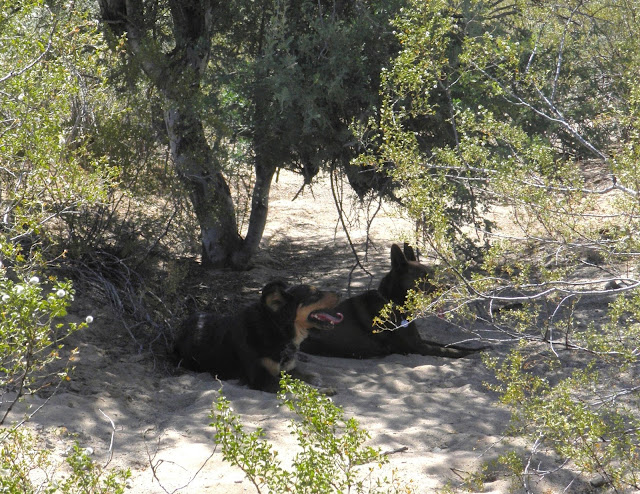 I'm heading for some blooming Cat-claw Acacias now but the dogs are getting adamant: they are hot and thirsty and hide in the shade whenever I stop. So soon we had back for the bathtub on our patio. 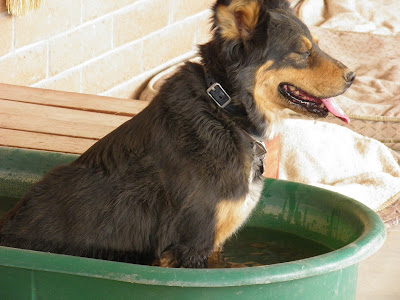