Sabino Canyon in May

My friend Ned Harris, in the official uniform of the Santa Catalina Volunteer Patrol (memo to self: take a photo!), and I walked the lower canyon on this overcast cool morning that only around noon turned into a balmy windy day. So the insect world was subdued and the herp-world seemed non-existent for most of the trip. But we still found what cannot hide - nests and sedentary creatures and a few that were driven by a purpose stronger than the instinct to hide in a warm spot.

Here is the turreted entrance to a spider burrow. Big enough for a small tarantula, but tarantulas do not invest in such structures. Large wolf spiders of several genera do, and while I've never seen the inhabitant, I have seen Hogna sp. hunting at night in the vicinity of these turrets. Maybe they build them? According to 'Common Spiders of North America' Hogna builds a burrow with a big entrance (>30 mm) with a turret constructed of silk, grass blades, and small twigs. In this case: dry leaves of Canyon Ragweed.

Our special reason for the trip were these paper wasp nests, and we were happy to find that the cool weather not only kept the wasps at home but also made them extremely approachable. So we were able to document some interesting overlap between two local subspecies of the species Polistes major. The wasps on the left nest are all of the dark brown subspecies (?) Polistes major castaneicolor that I have seen for several years in the location (the roofs of restrooms along the tram line). But on the right nest  you see only two dark individuals (lower right) while the otherones are of the  yellow-brown banded subspecies Polistes major. These two nests were under the same roof, only a few feet apart, but there were more nests like this in other locations, even in a Cain Cholla cactus on Rattlesnake Trail. 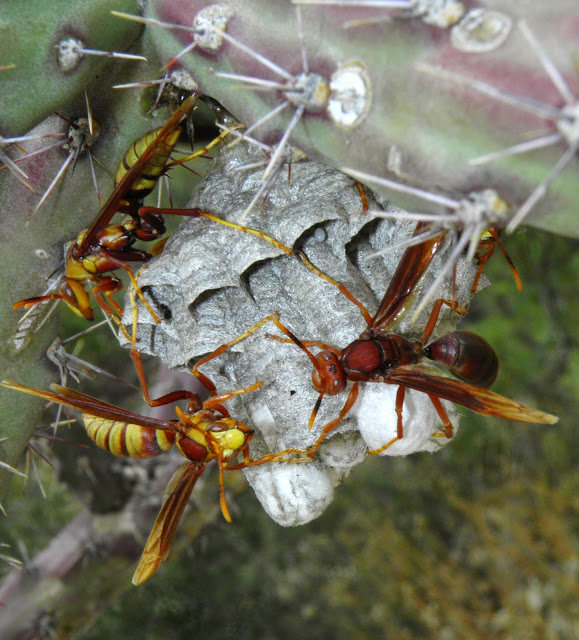 In mesquite trees near the dam of the creek, we found clumps of  nymphs of the Giant Mesquite Bug Thasus neocalifornicus, Coreidae. Even against the white sky they were recognizable by their antennal disks. From close up, their colors were dazzling, especially in the diffuse light. 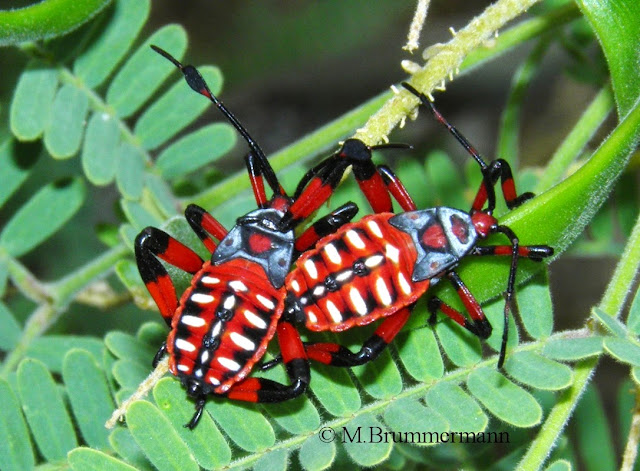 Their colors are warning colors - they have some dorsal glands that release acidic substances when the bugs are threatened. We smelled it.
Among all the hundreds of mesquite trees in the lower canyon, only a few have Mesquite bug nymphs all over their developing beans. And not only that, Ned told me that over the years always the same trees were hosting these hungry armies. Since the bugs feed mainly on the developing beans, damage to the trees is difficult to quantify. 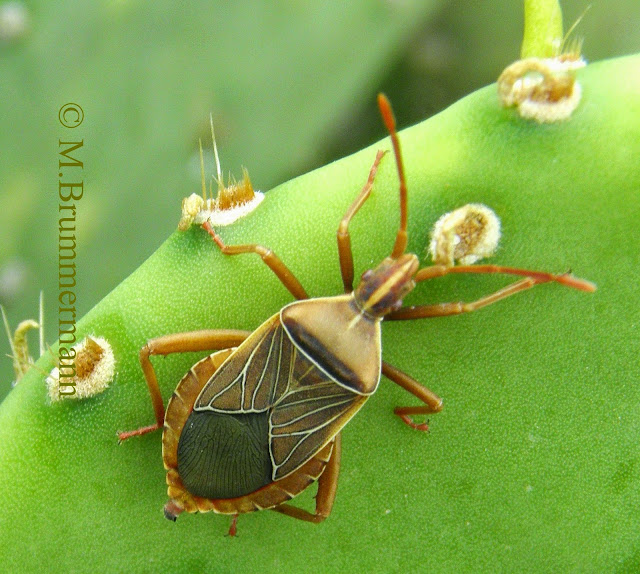 Chelinidea vittiger, the Cactus Coreid, was guarding a whole clutch of offspring on on a nearly spineless Opuntia at the Bluff Trail. This genus reminds me of art nouveau  jewelry. 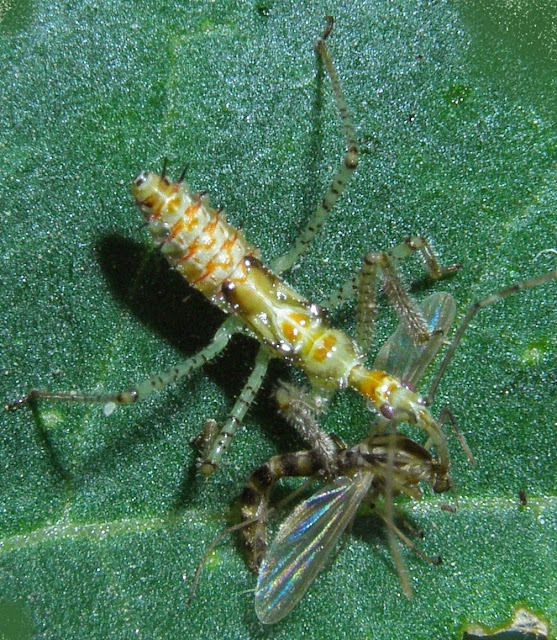 The tiny Zelus renardii, Leafhopper Assassin Bug, nymph, a Reduviid, had caught a gnat nearly its own size. Z. renardii seems to be much more common in Sabino Canyon than Zelus tetracanthus, the dominant species in Madera Canyon. I wonder what the reason may be. 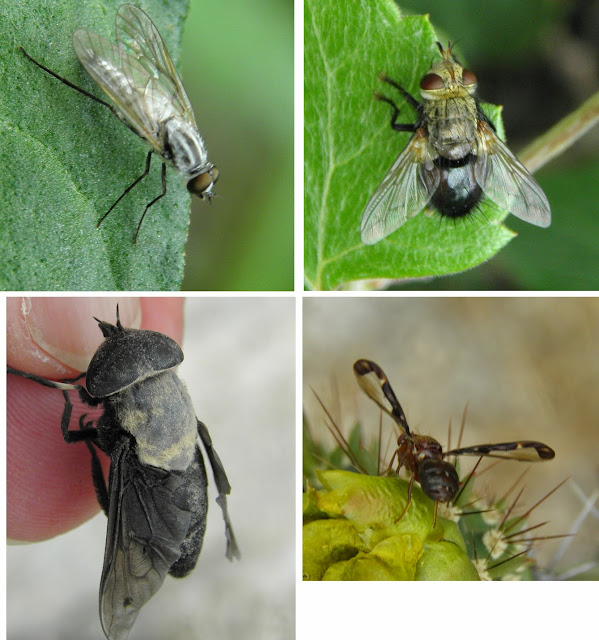 In the cool weather, even flies just sit still to have their photo taken. Here are a Therevid (Stiletto Fly), Tachinid, Tabanid, and a Ulidiid (Picture-winged Flies). 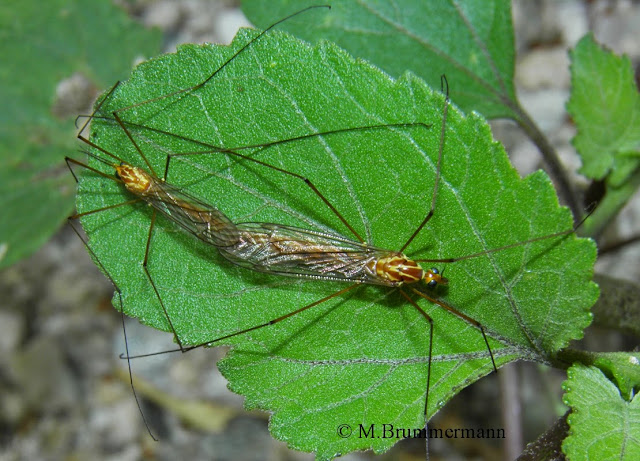 A pair of Nephrotoma sp. (Tiger Crane Flies) are making the best of it. Crane Flies best are adapted to cooler, humid climates. In Arizona they are most often found early in spring or close to riparian areas. This may be N. wulpiana or ferruginea, in which case the riparian forest is the typical habitat.  The larvae inhabit earth or leaf mold and feed on decaying plant debris and grass roots. 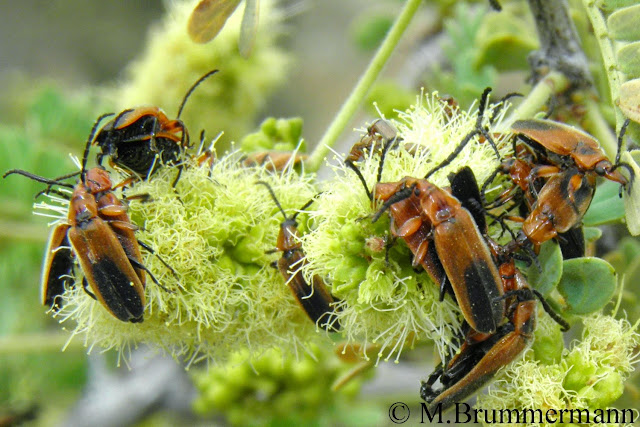 A mating aggregation of Lycids (Net-winged beetles) Lucaina discoidalis on Cat Claw Acacia. I find these every year on blooming acacia or mesquite trees. Interestingly, one tree may be absolutely covered in beetles, but there's nothing on the next one. Pheromone attraction may cause these aggregations of hundreds of beetles. Lucaina discoidalis can often be found in mixed groups with Lucaina marginata. 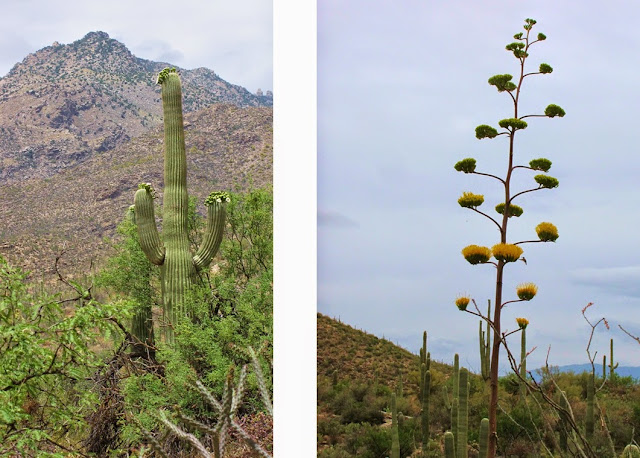 Saguaro and the first Agave blossoms are rarely seen against a cloudy sky. I liked the saturation of all colors provided by the diffuse light. 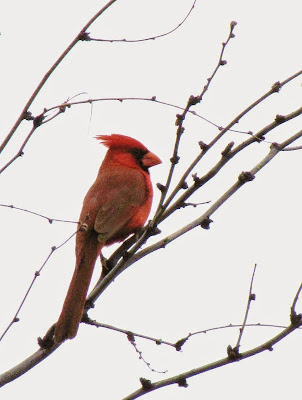 Shooting a cardinal directly against the white gray sky is still a strange idea, but at the cost of  blowing out all the lighter colors it produced a Japanese-woodcut quality that I like well enough. 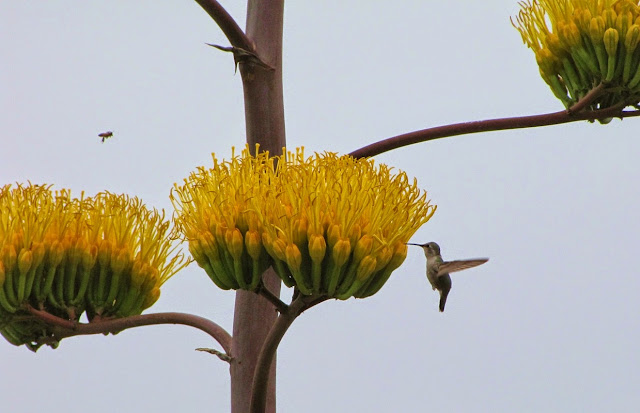 And any hummingbird competing with bees for flower space is worth shooting in any light. 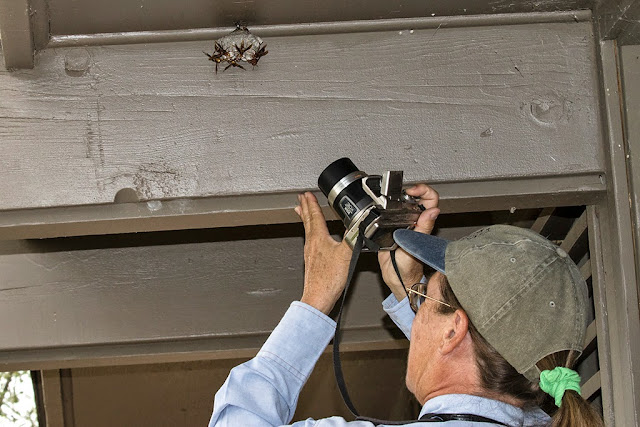 Ned just sent me this photo of my approach to one of the wasp nests. I am bracing the camera against the wall, about a foot from the nest. The aggressiveness of Polistes is often overrated.
Posted by Margarethe Brummermann at 5:18 PM