Reminding predators that they taste bad or are armed with venom or toxin, many insects sport bright colors and patterns: aposematic or warning colors.

Even the beloved Ladybug is toxic and warns birds not to eat it with its brilliant colors. In addition, for the more olfactory-oriented, it exudes foul smelling yellow heamolymph from its joints when caught and handled. My first memory of insects involves that smell: Adalia bipunctata used to overwinter indoors in Germany, and of course we kids could not leave them alone. But th...ose pretty bugs were nothing you put in your mouth - we knew that as toddlers. Ladybugs tend to congregate in summer in the mountains of AZ, enhancing the impact of the warning, I'm sure. The red is not uniform within members of the same species. Tests have shown that the redder ones were the more poisonous ones. Research also showed that better nutrition in the larval stage made the adult beetles both more red and more toxic. I think the two attributes may be correlated but not causally connected.


Nymphs of the Giant Mesquite Bug (Thasus neocalifornicus) enhance the effectiveness of their aposematic pattern and coloring by staying together with 'litter mates' until they are grown. Their deterrent is a row of acid producing glands on their backs.


Some insects are great chemists. They have the metabolic pathways to produce toxins and venoms that they then advertise with warning colors to prevent predators from even TRYING to take a bite. Many insects rely on plants, who are even better chemists, to provide them with toxic substances or at least the precursors of those molecules. The insects ingest the plant tissue or nectar and then sequester the substance to parts of their bodies, often after modifying the original substance for their own purpose. Insect nymphs and larvae often feed on different plants than the adults. So juveniles and adults have access to different plant derived chemicals. Some store enough toxins as larvae to keep the adult supplied. Others don’t. Lacking the chemical protection of the nymphs, the adults wear camouflage.

We have a grasshopper in AZ that may be an example, but I cannot find any research papers about it. But take a look at the young Aztec Spur-throat (Aidemona azteca) on the left and compare it to the adult. The nymphs feed on Datura in my photos. I have not seen the adults feed.

Our horse lubber shows yellow patterns on black, and when really threatened flash their red hind wings in addition. Are these grasshoppers toxic? Or just using a startle tactic on a predator? I often see them cannibalizing corpses of their own kind. But: I kept a ground beetle in a terrarium. I had found the beetle feeding on a dead Plains Lubber. When I offered a dead Horse Lubber the beetle seemed ready to rather starve than eat that one.


The only purpose of warning colors targeting potential predators is to be impressive, recognizable and memorable.
Not all aposematic colorations are geared towards day-active, color-seeing birds, lizards or humans. Many insects are most active during dusk and dawn, the time when 'all cats are gray', meaning that colors become rather invisible. The crepuscular Pinacate or Stink Beetle is solid black. But its habitat has lots of open space with light colored sand. So its black shape stands out very well. The beetle adds an aposematic behavioral signal by standing on its head when threatened. This also allows the content of two big glands that eject at its rear to run down over its whole body. And the collector's hands. The signal of 'big black beetle walking intermittently and tending to stand on its head' is so successful that it is imitated by several non-smelly darkling beetles, a very smelly, but rarer ground beetle, and by big black, flight-less, harmless Cactus Longhorns.

The copyright holders for the most well known, most feared and most often mimicked aposematic color-pattern are doubtlessly the Vespids. Their trade mark are yellow bands on a darker ground. Their weapon is a modified ovipositor loaded with a cocktail of painful venom. Social wasps are part of this group, so the enforcers of this warning are not just single stingers, but often enraged armies with a nest full of off-spring to protect. Most of the solitary species can sting, but not with the same vengeance as the social ones. But they are part of the band-wagon of a Muellerian mimicry system. They are armed as well, but the strength of their warning colors is derived from the perceived dangerousness of the entire group. Of course only the females can sting. The males are just protected by looking so similar - they are Batesian mimics of their Amazon-partners

At Saguaro National Park West and other places where Wooly Star (Eriastrum diffusum) grows, you may come across aggregations of the Iron Cross Beetles Tegrodera aloga.
A very impressive blister beetles, it seems to be clearly advertising that it is loaded with cantharidin. Horse owners are often alarmed when they see these beetles. But the Ironcross beetle is big and obvious and does not live in meadows where hay is grown. It's the smaller striped Epicauta sp. that sometimes get caught in great numbers in Alfalfa bails and can cause severe poisoning in horses. Harvesting methods that don't allow the beetles to escape are partly to blame.


Rhodobaenus tredecimpunctatus, A weevil on Annual Sunflowers from Benson, AZ. I have never found one, so this is from the Uof A collection. Question: does anyone know of chemical deterrents to predators that the weevil might contain? Or is it a mimicry case? It never reminded me of ladybugs, but all my non-bug-enthusiastic friends immediately called it that.

The color is suggestive, so if I had an inexperienced Blue Jay, I would try if the bird would eat the beetle or not. That's how the late Thomas Eisner, the pioneer in the field of chemical ecology, tested many insects before he brought in his colleagues from biochemistry to isolate potentially bad tasting or toxic chemicals.
The beetle lives on Mallows with mostly orange flowers, so the coloration could also be cryptic. But Mallows are also full of phytotoxins, some used in herbal medicine, some outright poisonous to grazing cattle (central nervous system). So the beetles may sequester those chemicals to become impalatable.

Since Tetraopes, the four-eyed milkweed longhorn, has been mentioned here a couple of times, here are some AZ species. They are rather host specific, picky even among different milkweed species. Thin MW vines host the smaller beetle species, juicy big-leafed ones the bigger T. femorata. There are still new small ones to be described.
One of my beetle collages photographed from living specimens


Lycus sanguineus, June, Florida Canyon, Pima Co, AZ
Quoting EOL: The lycids, or net-winged beetles, are soft-bodied beetles, presenting aposematic colors and high levels of toxins, known as center models in mimetic rings (Marshall and Poulton 1902; Shelford 1902; Guenther 1931; Darlington 1938; Linsley et al. 1961; Moore and Brown 1981). BTW, their close relatives, the fireflies, are just as toxic. Many keepers of lizards found this out. Inexperienced tropical lizards will ingest them and die!
Lycids often aggregate in great numbers to mate. In Madera Canyon you can find them swarming around oaks, and in the desert a different species often covers certain blooming mesquite trees. As the neighboring trees usually have no visitors at all, I assume that clouds of pheromones are bringing the beetles together. 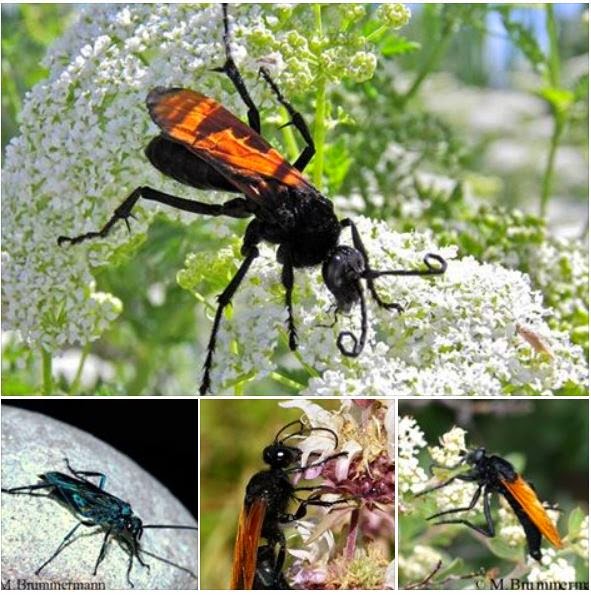 The Tarantula Hawks, a common name that describes several Pompilid species in the genera Pepsis and Hemipepsis, carries the most painful sting in Justin Schmidt's book. So it's not surprising that this wasp comes with a warning. Or does it? The top one is a Hemipepsis (I think) with orange wings. The next one is a Pepsis grossa, but this is the all black version. Others in the same species have orange wings and the 2 morphs mate and live in the same areas. The third one is a Sphecid, Sphex tepanecus. It's as big as a small tarantula hawk and might also sting, that's why I have included it here. The last one is the Robber Fly Wyliea mydas. It has no sting but a very painful bite. So these huge orange-winged, black-bodied insects are all able to defend themselves. Giving the same kind of warning, they enhance each others effectiveness: Muellerian mimicry. There are many harmless species that also mimic these, but that will be the theme for another week.

When I look through my photos of caterpillar I am tempted to believe that the majority of lepidoptera larvae has aposematic colorations. But most likely I just prefer to photograph the colorful ones.
In this group, we already had a Queen caterpillar that is toxic because its host, milkweed, is full of toxins. Its aposematic colors warn predators not to eat it.
The Io moth caterpillar in this image can inflict harm simply through skin contact, ad it advertises that danger with lively patterns and colors.
'As is true of most species in the Hemileucinae, the caterpillars of this species can produce a nettle-like sting from their spines. Some people show little or no reaction, while others may develop an itchy rash or welts that last for up to a few days, especially on areas of more tender skin. These caterpillars are not considered dangerous, but should be handled with care.' BugGuide info page

Posted by Margarethe Brummermann at 9:20 PM