I learned something new in a round-about way

I just learned something that I had missed so far because I was always too squeamish to observe it. The birth of a maggot that is. I remember being fascinated by a wiggling masses of white worms on a dead mouse that a hawk had dropped in our backyard - I was 4 and we had just moved from the city to the countryside. My mother was properly repulsed and worried about germs. I had also gotten a whiff of a smell that was more than unpleasant. So - no forensic interest was triggered in early childhood or even later when studying physiology and having to breed flies for their big eyes that were easy targets for beginning neurophydiologists' electrodes.

Nowadays I sometimes carefully look over the shoulder of an entomologists who sees animal cadavers as an interesting source for beetle specimens, but even then we tend to stay away from the most smelly rotting stages that flies prefer.


However, living in the desert, I love succulents, including Stapelia species from Africa. These plants use a very deceptive strategy to attract pollinators: instead of offering nectar or an abundance of pollen and the sweet fragrances that would announce those delicacies, Stapelias stink. They imitate very convincingly the odor of putrefaction, the odor of rotting meat. The one on our patio, Stapelia gigantea, the Giant Starfish Cadaver Flower, also looks like a piece of wrinkled, ripped skin with remnants of fur still on it.  All that of course to attract their pollinators. According to Wikipedia those would be mostly Blow Flies in the family Calliphoridae. Those green bottle flies would crawl around among anthers and stigma trying to find a good location to deposit their eggs on the presumed rotting meat and in the process pollinate the flowers.

I sometimes give talks about pollination by insects other than honey bees, so when flowers of my  patio plant had opened up and some insects approached its center I was ready with my camera.
But at first, there were no green bottle flies.

The first visitors I recognized as parasitic wasps. I had seen them before. Whenever I find a dead mouse in the garage or a bird that had hit a window pane these black and red wasps are around. They are associated with Sarcophagids, the big grey Flesh Flies whose larvae they use as hosts for their own offspring.


Another smaller wasp and a big Sarcophaga sp. female arrived next. I knew that the fly was a female because her big compound eyes did not touch on top of her head as the male's eyes do (that much I do remember from my electrophysiology days).

For me, the interesting part began here:
She crawled around in the center of the flower, probably doing the pollination duty that she was tricked into. Then she emitted bursts of sharp buzzing. At this time her abdomen was pointed pretty much at the center of the flower, the area that probably emits the foul smell. She seemed to be laying eggs, piling up a clump of little whitish cylinders.


The video function of my camera was running at this point, so I had a good close-up view on the screen. To my surprise, the cylinders moved and crawled deeper into the center of the flower. Not eggs. The fly was giving birth to live maggots. (Now I've learned that all members of the family Sarcophagidae are larviparous or ovoviviparous). Under normal circumstances, this would give the maggots a head-start over other consumers of the limited resource that they depend on. Little Burrowing Beetles for example have a slower start, being deposited in egg-form, but then they can rely on the tender loving care of both their parents, a luxury the flies have to do without.
But under normal circumstances, I never would have had my camera positioned so close to an egg-laying flesh fly. Recording it it on a flower instead of on rotting flesh made all the difference.
These larvae, though, are condemned to starve to death in the heart of the flower because their mother fell fore the deception of a devious plant. With them, the offspring of the parasitic wasp (a Sarcophgid specialist) is also bound to die.


We often think of pollination as this beautiful system of symbiosis between plants and insects, with dutiful bees doing their part, being then so richly rewarded that they don't mind sharing with yet another symbiont, the bee keeper (or should we call him a parasite of the system?)
In reality, plants have evolved to propagate their genes. That's it. They may pay for pollination services with nectar, drugs (Datura and Manduca) sex (Bumblee Ophris and hymenoptera) or let little fly-babies starve to death. The plant does not care! 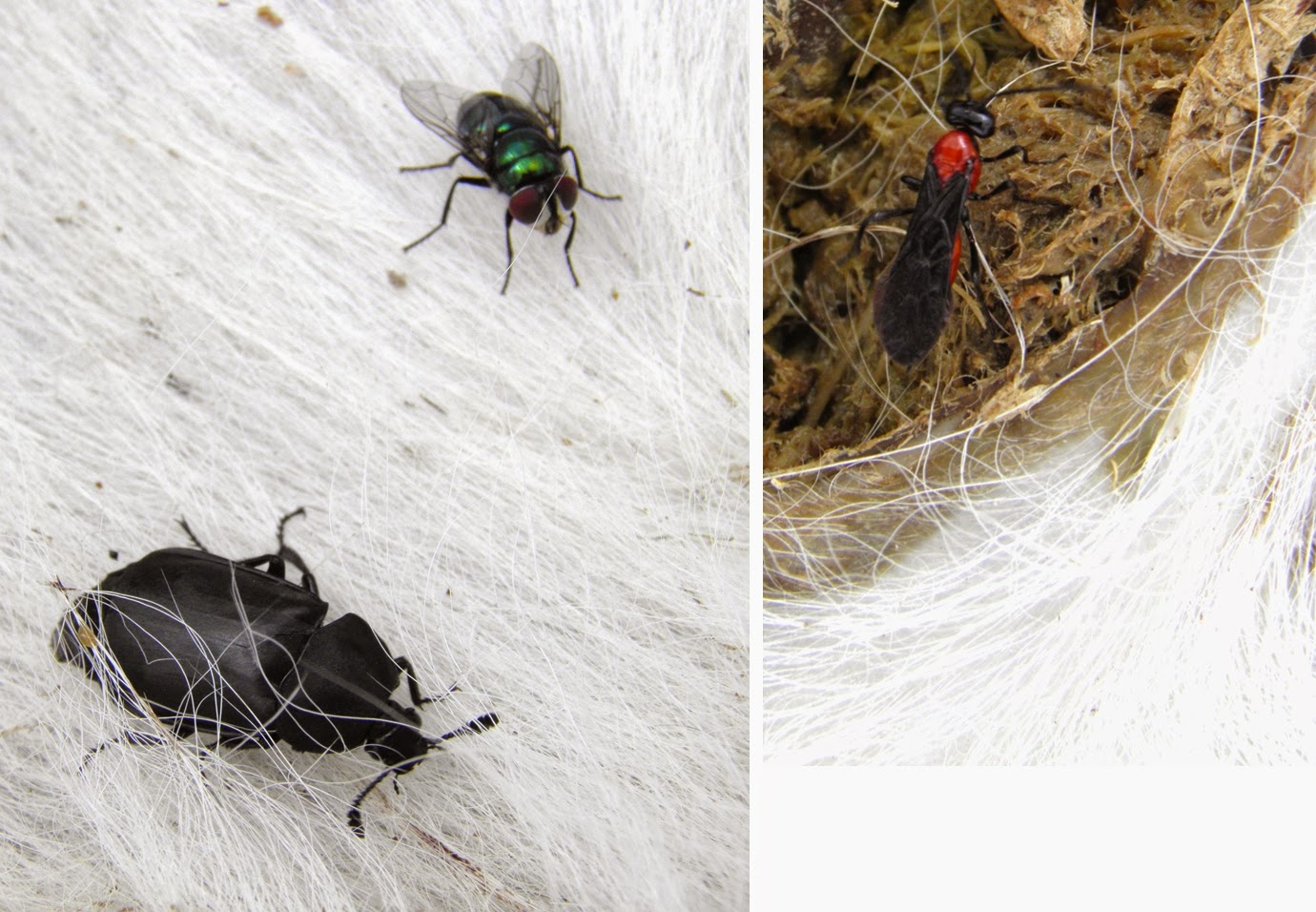 I thought I'd also add a photo of the 'normal' situation. Here a  carrion beetle, Thanatophilus truncatus, a blow fly,  Calliphoridae and again a parasitic wasp, Braconidae have found a dead deer calf. They were the first to arrive in the morning after the deer had been run over by a car at night. Their larvae will act as macro-decomposer, opening the way for bacteria and fungi. This is a very important role for insects in the ecological system.
Posted by Margarethe Brummermann at 5:21 PM