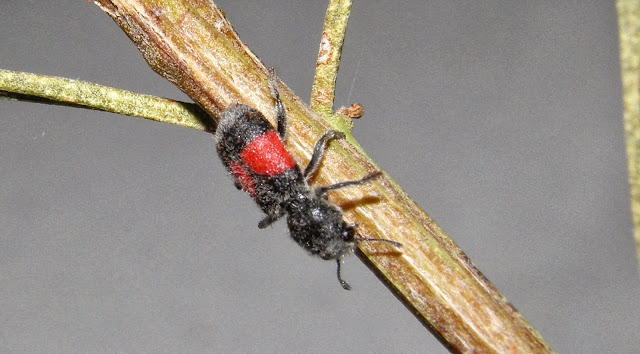 Clerids in the genus Enoclerus are among my favorite beetles. They are fuzzy and colorful and they move around in fast little burst of high speed, resembling very much the Velvet Ants that they mimic.

At our house we usually find the rather large Enoclerus quadrisignatus. I seem to remember seeing them nearly all year round, but my photos are all taken from May to July. 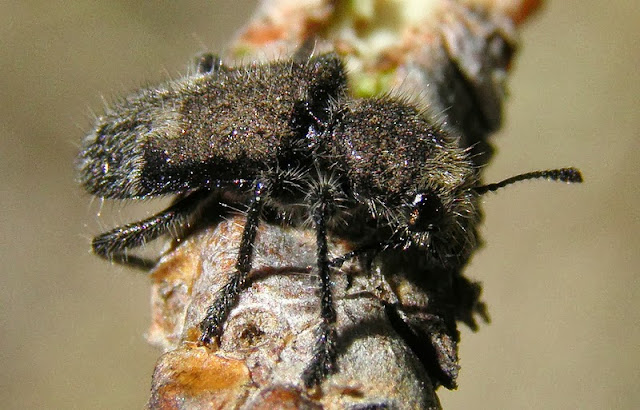 The drab Enoclerus moestus can be found on freshly dead pine in early summer at high elevations of the sky islands. It hunts for insects that come to lay their eggs in the wood. 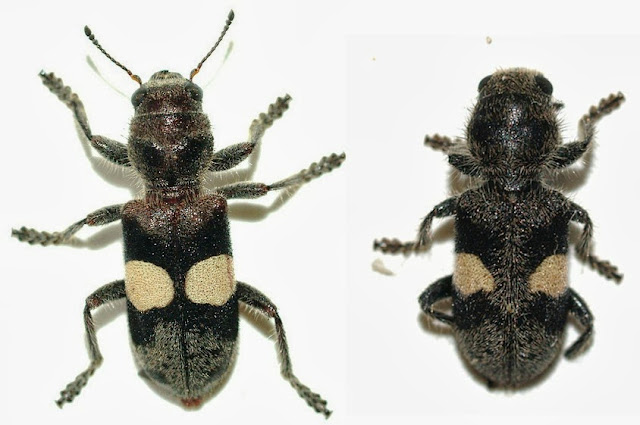 Enoclerus bimaculatus and E. luscus often appear at the black light in upper Madera Canyon. Dried specimens of E.bimaculatus have strikingly pink markings, but on  the living beetles they are ivory colored. 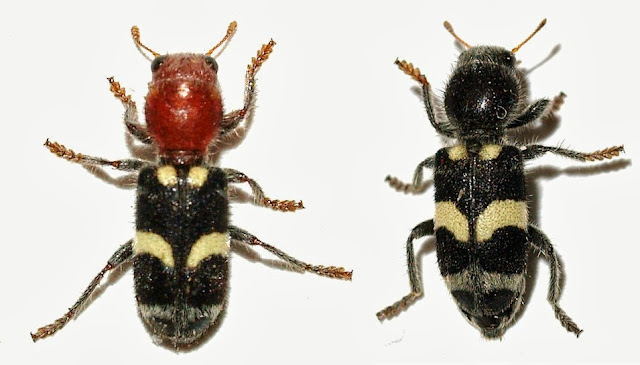 Both color morphs of Enoclerus laetus can be seen together on blooming Baccharis in autumn. While larvae and adult beetles of the genus Enoclerus usually feed on other insects, some of them also like protein rich pollen.

With 36 species north of Mexico, Enoclerus is the species richest genus of the family Cleridae in the US. While the genus ranges across the entire American continent, most species occur further south in Central and South America and it is assumed that their phylogenetic origin is located there.

Even though the beetles are small and quickly fly when disturbed, I have found and photographed several more species here in Arizona. Twice I have been extraordinary lucky: In 2009 I 'rediscovered' Enoclerus decussatus in Sycamore Canyon at my black light.


Clerid expert Jacques Rifkind said via email:
The bug you have there is very interesting--I've never seen anything like it in the U.S! I suspect it is a dark morph (with reduced markings) of the Mexican species Enoclerus decussatus. I have seen a similar color pattern in specimens from Mexico (there is one pictured on page 2 of my site). However, Enoclerus decussatus has not, as far as I know, been recorded from Sonora, which makes this a very unusual distributional record. In any case, it's hard to be sure of the identification without having the beetle in hand. I'd be very interested in examining this specimen if it is available. You possibly have a new species, but at the very least, you have the first U.S. record for a described Mexican species--a record that generates intriguing questions that only further collecting will be able to answer.
When I then sent him the specimen, he wrote: Your beetle arrived safely today. It is indeed Enoclerus decussatus (Klug). I looked into the literature, and it seems that Horn made a note in 1885 about a darkened specimen collected in Arizona. More recent checklists assumed this was an incorrect record, and the species hasn't been considered part of the US fauna since Corporaal's 1950s catalogue. So, you may have collected the first specimen of this in AZ since the late 19th century! And so it is now officially part of the US fauna. I will get a note out on the record soon." This record was then  published in the Pan-Pacific Entomologist.
Last week in Madera Canyon I saw another little beauty running up and down on the branches of a Baccharis that was visited by a great number of different beetle and wasp species because it was oozing tree sap.
Again, I couldn't find any record in BugGuide, so the photo was dispatched to Jaques. He answered: "That is Enoclerus hoegei -- a primarily Mexican sp. that has turned up (rarely) in Sabino Cyn, but never as far as I know in Madera Cyn. Barr considered it a new sp. but IMHO it's just variable-- as would be expected of something that ranges from AZ to Honduras. Tell Margarethe 'good job' again."

Posted by Margarethe Brummermann at 11:37 PM