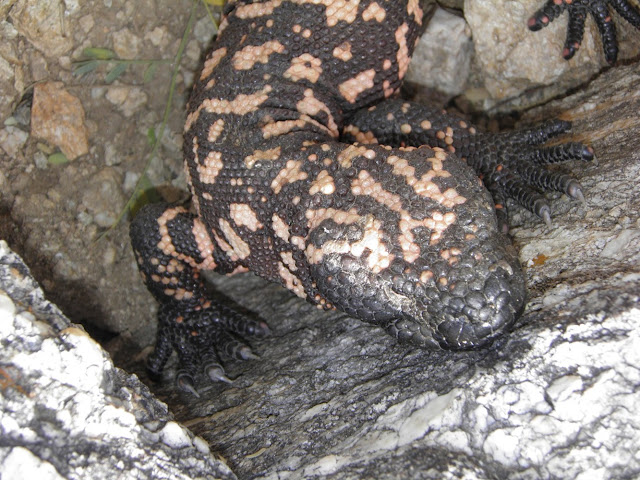 I'm going to be out of the country for a short while without access to my blog, I expect. So this is an opportunity to publish a few short blogs that were planned but not executed before. For example, when I found those big Bot Flies in Sabino Canyon they exited me and a very select few of my entomologist friends to the point, that a much more popular monster was left by the wayside. Literally: just watch him walking along.

Our Gila Monsters were unusually visible this year, at least in Sabino Canyon. For several weeks the Group of the Friends of Sabino Canyon met on or two on each of their Wednesday hikes. No idea whether it was the same individual that took a liking to the group? I think the monsters are rather oblivious of people. Mostly they want food at this time. After all, they spend most of the year under ground, hiding from drought and food shortage between the rainy seasons.
When they are out, they gobble up whole clutches of quail eggs,  whole litters of rat pinkies...I once surprised one that was chewing down a whole rather grown-up pack rat. This venomous lizard  (the only  in the US) has to chew with their formidable jaws to release venom along a grove in their teeth.


On the lower jaw of my friend here you can see the big, bulging glands. Although I didn't get my nose too close to him, after all, Gila Monsters are said to suddenly lunge, bite, and then hold on for good, I noticed a peculiar chemical smell -  ok, all smells are chemical, but his perfume seemed nearly inorganic: a little like chlorine in a pool...   A pheromone? It is mating season.


The smell of his poisonous droolings? But he wasn't drooling. He was only testing the air with his forked purple tongue. He was certainly not interested in me or my hiking boot standing between him and whatever he had to do before going into hiding once more.

Posted by Margarethe Brummermann at 6:36 PM